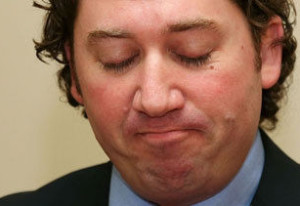 Much has been written of Aaron Gilmore and his poor decision making skills at a Hanmer Springs bar. But the whole affair has made me feel a bit icky. Not because we saw a man who seems to think he’s better than the staff who serve him, there have been politicians like this since the dawn of Parliament. The ick factor comes from our relentless bloodlust and enjoyment of seeing this man fall to pieces in front of us.

The internet age has revitalised the masses’ enjoyment of public floggings, not since the Romans fed Christians to the lions has there been such a revelry at personal destruction taking place in the open air. The facts of what we KNOW about that night is that Gilmore drank some beers and wine and was a plonker to wait staff. We THINK he asked “Do you know who I am?” which wasn’t just ironically poetic due to the fallout of everybody now being familiar with him for all the wrong reasons, but also suggested a personal belief that his status as a lowly slotted list MP in the ruling party made him superior to his barman. Even if the latter is true, and it appears today to be increasingly likely despite yesterday’s teary apology, so what? Clearly he’s a plonker. But does that warrant this collective attitude as a nation that he should be utterly destroyed professionally?

I do not write this from an ivory tower – I work in radio and had my fun at Gilmore’s expense on air. I certainly got caught up in the group stoning of this MP from the south. But after a couple of days, perspective should reign and the issue should be dropped. Right? The gleeful tone with which the news continues to bang on about this man’s behaviour is starting to eclipse the event itself and a dark, awful side of human nature is revealing itself far more than Gilmore revealed his inner idiot after some drinks.

Loathe as I am to agree with Michael Laws, he may have had a point about this one. Gilmore didn’t kill anyone, he wasn’t found guilty of corruption, he was found guilty of being an asshole. And to quote my mate Matt Heath “Let he who hasn’t been a dickhead drunk cast the first stone”.

We need to talk about Barack

What did you think of Laws’s idea that people who criticise Gilmore for being a bully when drunk should also criticise Parakura Horomia for being fat and dead?

It’s a bizarre comparison from a very odd man. Do not agree.

In terms of the great sins, it ain’t up to much, but the symbols of it play out really badly. It’s a literalisation of the accusation levelled at John Key’s Nats – a stuck-up party, trading on a blokey image while shitting on the little people and looking after their mates. It’s a perfect fit for the narrative of why National’s time is done, and it’s no wonder people are fixated on it. The public & the media want Key to own it because it’s a chance to whack him with this narrative and see how he handles it.

(Gilmore himself gave a lame apology and appears to have been economical with the truth even then; the first will do nothing to get you out of the pit, and the second (if true) will seal your political fate – until some time has past and then you can start again, assuming you haven’t burnt your bridges with the top brass in the party.)

All of which is me saying, Gilmore may not personally deserve the barracking – but he’s a weak spot for whole political party, and that means he’s gonna get plenty. This is the political life, and it’s the same all over. I find it hard to have any sympathy.

You’re right about why this has captured the public imagination, it does embody all that the left accuses the right of being. But I cannot agree that we should just accept this onslaught as just the reality of being in political life. It doesn’t have to be if we decide to allow humans to err.

You’ve definitely made me think, Tim, but I don’t think I’m changing my mind. I am sympathetic to your argument, and to the point you make about how humans make mistakes and we should keep our responses in some kind of proportion; but I still don’t think the Gilmore situation is problematic. Gilmore is still a target because the party around him hasn’t closed off the situation effectively. Gilmore is, as well as a flawed human being, a weakness of the government – and it would be wrong to let the former mean you give a pass on the latter. How Key & National handle and manage this situation speaks to those symbolic issues, and they plainly have done nothing to change the situation.

Let’s flip it – if Gilmore had been sharply cut loose by Key, like Helen Clark would coldly do, would he deserve sympathy? I don’t think so. Sure, he made a human mistake, a small one in the grand scheme of things, but the political weight hangs on his every human action because that is how the system works. And it isn’t arbritrary that it works this way – I suspect it is necessary in any representative government that the individual representatives must submit themselves to higher standards and higher stakes around their everyday existence, because the power of governance must carry with it the responsibility of being worthy of that power.

So perhaps that is the real point of disagreement between us – that I think it does have to be the reality of political life, whereas you don’t. Everything else, I guess, springs from the consequences of one or the other position.

Anyway, I’ll continue to… Ruminate… on this matter. Cheers 🙂

I have to admit to a fair bit of Schadenfraude in this case.

However, it’s not surprising the media have run with it, though I’d argue it’s not for the right reasons.

The story is currently #2 on stuff.co.nz and #5 on the herald website – people love a good scandal, and it’s easier to write about than actual policy issues.

I’m annoyed that the usual suspects have used it to bash MMP, rather than direct some justified criticism at the party that protected his ranking, despite the fact that he got caught out “padding” his CV the last time he was an MP (that time, he blamed the parliamentary library). Seems he has form for doing really dumb things and then blaming others – something you might want to consider when choosing your list.

I agree. And personally I had been saying since the start that the PM should have cut him loose. How he gets dealt with by his party is separate to how the media treats him and for what it’s worth, I think he should be hauled over the coals by National. MMP bashers will always point to idiot list MPs to prove their point but it always comes back to that age old question – You got a better system?