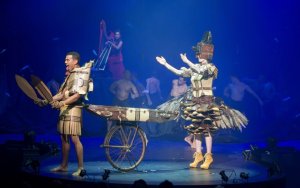 As well as being art and wearable, this also won

I was asked if I’d like to review the World of WearableArt (or WOW! as it’s colloquially known, ignoring the fact that “Art” is its own word and further sending New Zealand on a spiral into stupidity due to the left wing’s indoctrination of our education system).

Many years ago, Nelson used to host WOW but then in a perfect display of the market determining the best result Wellington took it and it’s never looked back (SUCKED NELSON).

Every year there is a theme, I can’t remember last year’s theme. This year the theme was “Red”, the blood of angry men, or a not-so-subtle endorsement of the Labour party. But that was a poor choice of endorsement guys, because the election had already  been and they lost. How embarrassment. It’s just so like the arts community to support the left of New Zealand. All the gays and feminazis who make up the leftwing of New Zealand all design fashion as well.

So my wife Kim and I were shepherded like sheeple into the media room where other media-sheeple were mingling with the wine and each other. There was also meatballs on a stick. They were quite good. It’s surprising that we don’t put more things on sticks really isn’t it? Like chocolate bars on hot summer days, or poor people.

Periodically I would leave the comfort of the media room to join the throngs of middle-aged women who smelled like my mother did when she dropped me at school and would kiss me goodbye and I’d stand there wearing a backpack that was larger than me, and a bowlcut that truly highlighted my ears and wave goodbye to her as a solitary tear slid down my cheek and into my COOL KIDS lunch box and soak my sandwiches. And roll-up. I loved roll-ups. Except for blackcurrant rollups. They were the biggest disappointment as a child. With their digusting black-currantiness (the original version of this joke had “with their disgusting blackness and currant-ness but then I realised how that read and I’m not a racist).

Anyway leaving the safety and comfort of the media room involved not only fighting my way through hordes of people older and more female than me, but also navigating around the “performers” who were in the lobby. I give that the ol’ inverted commas treatment because for some of them “performing” meant standing still. Completely and utterly still. For others, it meant standing in a large vase of a dress that elevated them far above the crowd and waving their arms like a slowed down version of a wacky waving inflatable arm flailing tube man. We took a photo of that, but I’m a crap photographer so I won’t be putting it up here.

Being part of the all powerful media, we were given programmes for free, which was lucky because they cost $25. TWENTY FIVE DOLLARS. What sort of shenanigans is that? You could buy Nicky Hager (Steinlager)’s book online for less than that. I started browsing the programme, but then I realised it wasn’t a programme so much as it was an image of every single outfit that was going onstage.  Not wanting to spoil the ending (or beginning or middle) I closed the programme and resumed my media-ing by having another free drink.

Then it was time for the show!

So like dutiful little lemmings we all followed the head of marketing to our seats. The lights dimmed, the crowd shushed and then we were treated to Charlie Chaplin! What are you doing Charlie? I thought you died decades ago. And then it turned out he HAD died decades ago and that this was an ACTOR/LIAR misrepresenting Charlie on-stage. Oh I felt betrayed.

And then we were away into the bright festive, loud, quiet, exciting, dull world of wearableart.

I’ve been to WOW before. And it was dazzling and exciting and a rollicking good adventure from start to finish. This time around I wasn’t quite so dazzled, excited or … rollicked. There were parts that were utterly magnificent and fun. The section where the clothes was modelled by children was fantastic, but then there were other sections that … well … they insisted upon themselves. Some sections seemed to drag on and on. The open section, which should have been exciting! And fun! And open! Was actually very…slow and pedestrian.

That’s not to say it wasn’t good. When it was good it was very very good. As I said, the children’s section was wonderful (disappointingly I was to learn that these weren’t clothes designed BY children but rather FOR children)(except you probably wouldn’t wear any of these clothes for real, a lot of them were impractical). 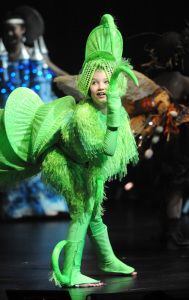 What the actual fuck is going on here?

I learned that the music actually had a massive role to play in my level of enjoyment of each section. If the music was serious or slow then I would usually find it dull but when they played Ricky Martin or that song with the trumpets from Pulp Fiction, well I rollicked in my seat! Remember WOW! You should be fun, and fun usually requires energy, so don’t play funeral dirges because no-one has died. In fact if you want musical advice, I have some: play this song on repeat for the entire night. 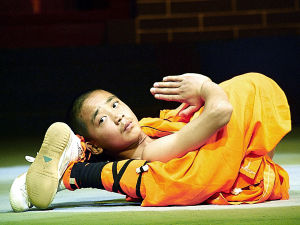 I hurt just looking at this picture

If you’re thinking that WOW is nothing but a fashion show and if you’re not in to fashion then you’d be bored stiff, well you’re wrong! It’s a light and sound spectacular! Special effects! Technical whizzbangery that I don’t  understand! And Shaolin warriors! I’m lead to believe that this doesn’t occur every year but this year a troupe of Shaolin warriors was flown over from China to fight on stage. Because the theme was RED and China is COMMUNIST with a RED FLAG. Nice indoctrination guys.

One of the Shaolin Warrirs was a 9 year old who did backflip after backflip. Repeatedly. I can’t even do one blackflip and I’m 30. This kid did HEAPS and made me feel inadequate about myself. The Shaolin Warriors was actually the highlight of the night. I could have easily watched them for more time, but I didn’t get to because the show ended. And just like that I had been WOW’d. But only in the sense that the show was named WOW, I was fairly ambivalent from a WOW THAT’S AMAZING perspective. So I don’t want you to be mislead.

Thanks to the team at WOW and Wellington City Council for furnishing me and Kim with tickets. They were much appreciated.