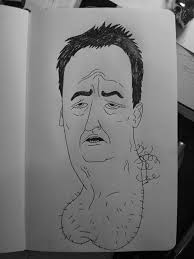 I shit you not, this was the first image of Mike Hosking that came up using Google Image Search’s “for reuse” button

In continuing my trend of writing about things days after everyone else has pretty much covered it, I’d like to wade in on the Mike Hosking thing.

Personally, I don’t have a problem with Mike Hosking being biased. Often cringingly so. I have enjoyed immensely that he came out and said he’s not a journalist and never has been. That’s been his defence for his editorialising and I’m cool with it.

People argue that the issue with Hosking isn’t his biases but rather the platform(s) he’s given to espouse his Sonnets to John Key. And it’s true he is over-exposed. He’s on NewstalkZB, he’s in the Herald, he’s on Seven Sharp. He truly is a current affairs svengali. And yes the result of this is that a lot of people’s opinions are probably being shaped by him, but that’s not a reason to get rid of him. That’s a reason to get someone on the other side of the fence to match him.

I recently watched Merchants of Doubt which details how master bullshitters become spokespeople for issues such as climate change denial, pro-tobacco positions etc – basically things that we’d consider “evil”. The part that really struck me the most was when they focused on a lobbyist/spokesperson on climate change denial call Marc Morano. Marc was the person who broke the “climategate” emails story which got the likes of David Farrar and Cameron Slater all moist and erect with excitement that we finally had proof that climate change was a big hoax designed to … errr…pointlessly save the world?

Marc’s made a lot of appearances on television debating scientists. And on the one side you have facts and figures and the truth, and then on the other you have showmanship. And by rights, climate change deniers shouldn’t even be given air-time because it’s so patently absurd. It’d be like deciding to have a debate on whether cats should be allowed to breed and having a spokesperson on there who denies that cats exist at all.

But the thing with Morano, and this is the same with Hosking, is that they are great showmen. They have talent and very strong performing abilities that have given them this platform that they can then exploit. And in the case of Morano, on the other side he was debating scientists. Who have, you know, facts and stuff, but who lack the presentation skills and the ability to condense complex thoughts into simple soundbites. And yes this is deeply cynical and we shouldn’t bow down to that sort of behaviour, but the thing is we do.

If we really want to balance the equation out with the Hosking situation, we don’t silence him and remove his platform. We critique his over biases but we also find a talent or groups of talent to even it up. Find someone who can present complicated lefty perspectives in a way that infuriates those on the right (John Campbell is often suggested here, but Campbell actually rose above this fray, Campbell held to account whoever was in Government, left OR right). I’m talking about the Fox News of the Left. Or MSNBC as it’s called.

And no I don’t have anyone in mind, I’m just positing an alternative to silencing someone, which is to make the din louder, but from our side.

I hope the Young Nats paid for their license

How about Martyn Bradbuhuhuhuhahahaha dammit almost made it that time…