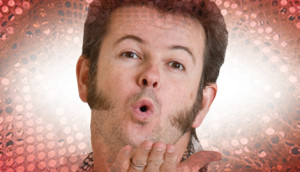 It’s a small crowd packed into the large Foxglove Starlight ballroom. Which is a real shame because the next hour or so proves to be a masterclass in musical improv comedy.

If those two prefixes turn you off, don’t worry. As a person who’s consumed a lot of comedy over the years, improv and musical are not two of my favourite styles, however Greg Ellis combines them both in such a delightful, thoughtful and intelligent way that you can’t help but be taken on the journey.

He starts off on stage resplendent in white lounge suit and sparkly red shirt. He is Vance Fontaine. Slightly washed-up rest-home singing sensation who has returned to New Zealand for a triumphant tour. He introduces his band who are all suitably attired as well.

Vance’s story is one dictated by the crowd. In classic improv style he gently asks us for words, titles, genres, people – whatever he needs. And it’s a testament to Greg’s ability and warmth that he doesn’t suffer through that awkward New Zealand silence before getting suggestions. People are right into it from the get-go.

Then he launches into a song, a song for lovers, about lovers or remembering lovers. And his ability to rhyme combined with his phenomenal band’s ability to go with any genre thrown at them (I had to look up what Klezmer was when I got home, to the gentleman in the crowd who suggested it, what’s wrong with you? To Greg and his band who knew immediately what it was, I doff my cap).

One of my issues with improv has always been that the laughs come because it’s improvised. That if you were to deliver a scripted comedy show and use the lines used, that it wouldn’t be funny. This is not the case with Greg. Any man who can work in a gag about Christopher Wren, Jack Kerouac and being in a state in Virginia has got a comedy brain that fires on all cylinders.

Obviously some of the songs are not as funny as others, but the banter between them more than makes up for any lulls in the show.

Tonight is the last night of this season, if you get the opportunity go. Because it is a truly great show.