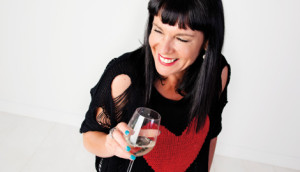 Michele A’Court has long been one of New Zealand’s premier comedians, she’s won oodles of awards and has pretty much clocked comedy. So it is a real pleasure to see her back doing a solo show for the first time in seven years (not the first time I’m made to feel a bit old in tonight’s show).

Her show is “Stuff I forgot to tell my daughter” and it’s based around all the wisdom that she, as a mother, forgot to impart on her daughter as she grew up and moved out of home.

The show opens in a way that is fairly unique to festival shows, there’s no high energy raucous comedian storming the stage, instead we’re treated to a lovely slideshow of her daughter growing up. It’s a sweet natured beginning that makes a nice change.

But then Michele enters the arena and the energy just flows from her. Michele is a pro. She’s always been a pro, and as an audience member you feel comfortable knowing that whatever comes is going to be a good time. She has a rough opening gag about Rihanna and spousal abuse that got a bit of a groan and laugh from the crowd – that sort of material isn’t to my taste but it worked, so the comedian has fulfilled her obligation to make us laugh.

Her material about the trials of parenthood is good solid fodder, slightly more difficult to relate to if you’re in my position of not having children, and potentially fills me with a sense of foreboding as I consider the prospect but it’s a nice take on a subject matter that doesn’t get a lot of air time.

She then moves on to the history component of the show. Her daughter was born in 1993. She takes us through the current events from 1993 because being a new mum she missed them. I find topical jokes hard to pull off because they date so quickly. Michele just marches through that barrier and then some, getting good laughs from unexpected places for news stories that were 20 years ago! To be able to deftly pull that off is a sign of a quality act.

Then we get to the crux of the show. Feminism. Michele did not explain to her daughter feminism as she assumed that being a third generation feminist, she’d learn it herself. And this is the heart and soul of the show. She warms us into it (so to speak) with a couple of lesbian jokes to remind the audience that she’s not here to preach man-hating feminism, and that she’s still our friend (though with that persona, I think she remains everyone’s best friend). In fact her gag about Queen Victoria is outstanding and breaks the record for oldest current event I’ve seen joked about on stage since Jesus got nailed one night and woke up three days later.

The story of feminism told through Michele’s eyes is fascinating. Not every part of the show will have you laughing but dammit it will have you hooked. The comedy is clearly coming from a personal place, it’s a show that Michele wants to do and wants to tell. There’s no filler material, just things that she wants to get off her chest.

There are parts of the show that could do with a few more gags as it gets close to a lecture, however it never crosses that border and – as she points out – it’s not always funny, but it certainly is fascinating.

She delivers the most beautiful and stinging riposte to the gender pay wage gap I’ve ever heard and the show builds to a beautiful crescendo.

Unfortunately I had to leave early, just as she brought a singer on stage to perform. But from what I’ve heard, following that singer, Michele brings it home in a “joyous romp”*

This is not just a show for women, and if the idea of hearing about feminism turns you off and makes you yawn and say “man hater” then this is a great chance for you to go along, learn some stuff and laugh a lot along the way. So don’t be a dick. Seriously, she’s one of the best.