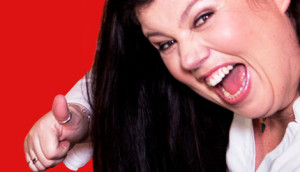 I turn up to San Fran to see Urzila Carlson about two minutes before the show starts, and the venue is packed.

Urzila immediately gets the audience on-side with jokes about Wellington, making fun of the snobby coffee and craft brew cultures. When she suggested Wellington had shit coffee the audience audibly gasped. It was beautiful.

One of the things I liked most about her was her ability to insult the crowd and endear them simultaneously. It’s one of the riskiest tightropes a comedian can walk, and Urzila nails it, especially her bit about the long standing “”””rivalry”””” between Wellington and the Hutt. She’s an outsider and with that brings a clever and fresh perspective. Having been away from Wellington over the past few years, I could totally relate, but everyone was laughing – even the locals – which says a lot about the truth of the joke.

Urzila tells us the show is called Poise Control, about being a grown-up and controlling your emotions but also being more honest and upfront about those emotions. She accuses the world of being ‘too PC’ and discusses the perils of not being completely honest with each other all the time. I totally agree with her, except with her choice to describe that as “politically correct”. To me, “politically correct” is a phrase people use when they want to be an asshole and the world isn’t letting you. Being honest is completely different to being a dickhead. It was probably just a small difference of opinion on the definition of the phrase, and the audience didn’t seem as affected by her use of the phrase as I did. Have I become too politically correct?

The beginning and end of the show were strong, but some of the jokes in the middle obviously needa bit more work. Generally, comedians will slide new material in the middle of their sets to ‘hide them’ as they develop them, so it wouldn’t surprise me if the weaker material was just newer than the rest. I sat right down the back, and the crowd where I was sitting became slightly disengaged until the end, when her strong finish and clever call backs re-captured their attention.

Overall, it was a great show with hilarious moments. I’d recommend you see it, but there aren’t any tickets left, so too bad!

How not to write a comedy show