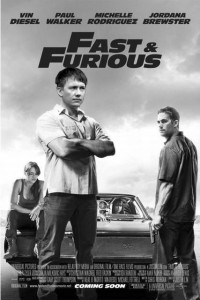 Last week, I presented my ideas on how we could save television from its seemingly relentless decline – this week, I’m turning my attention to movies.

If television is sick, then movies must be just about terminal. Sure, they’re still profitable – despite the studios’ claims about piracy affecting their bottom line, they continue to make eye-watering amounts of money. But are the films any good?

No. No they’re not. Generally it’s the same turgid bullshit year after year, or possibly even a watered down sequel. Diluted turgid bullshit. I have a feeling that it has something to do with the industry’s increasing reliance on numbers, rather than artistry, when choosing which movies to make. And also to do with the fact that on average, most Hollywood movies contain little to no Vin Diesel.

Since his leading man debut in 1997’s critically panned Strays, Vin Diesel has appeared in just 15 films (not counting The Iron Giant, for which he just provided a voice, and The Fast and the Furious: Tokyo Drift, in which he had a relatively brief cameo). That’s fewer than one per year, despite the fact that he is universally loved.

By contrast, since 1998’s Lock Stock and Two Smoking Barrels, Jason Statham – an actor who arguably occupies a similar cinematic space to Mr Diesel – has appeared in a staggering 31 movies. Dwayne ‘The Rock’ Johnson, since making the jump to acting with 2001’s The Mummy Returns, has starred in 21.

With this as context, Vin Diesel’s omission from so many blockbusters seems inexplicable, given the palpable improvements his mere presence would provide. Here is how casting Vin Diesel would have made several recent movies substantially better (warning – possible spoilers):

Film: Star Trek Into Darkness
Role: Mr Spock
No one’s denying that Zachary Quinto certainly looks the part. However – and I know he’s supposed to be half-human – I thought that the whole point of Vulcans is that they were cold and emotionless. Now, in the script for the film they certainly make a lot of fun of Spock for having no emotions… but unfortunately Mr Quinto just can’t seem to avoid having a few from time to time, including a particularly big emotion near the end. It’s possible that the same would be true of many other actors.

Film: Iron Man 3
Role: Pepper Potts
Let me be clear: I’m not saying that Vin Diesel should branch out and start playing women. Neither am I saying that Gwyneth Paltrow did anything but a perfectly serviceable job in the role. I’m saying that in this age of marriage equality, where “don’t ask don’t tell” is a thing of the past, that Marvel should have taken the brave step of casting Vin Diesel as Tony Stark’s male love interest, without otherwise changing the script in any way at all.

Think about the positive message this would have sent: the flagship of Marvel’s fleet of superhero movie franchises featuring a loving gay relationship at its core. The lazy Hollywood stereotype of homosexual campness would have been thrown by the wayside by this undeniably masculine couple, who would create a powerful set of role models for vulnerable youth, as well as a heck of a superhero team for future entries in the series.

They’d probably have to change the name though, as ‘Pepper’ is a little feminine. Pepperoni Potts?

Film: Skyfall
Role: Kincade
[Further warning: major spoilers ahead. Go watch this film then come back. We have time.]
Skyfall isn’t exactly free from plotholes. Javier Bardem’s plan is completely incomprehensible, and it’s not clear that whoever came up with the “hacking” elements had ever seen a computer, let alone used one. But perhaps the silliest bit of all is the film’s climax, in which James Bond cleverly lures the private army of a wealthy supervillain to a remote Scottish country estate, then faces off against them with the help of some ancient dynamite and the estate’s even more ancient groundskeeper.

Bond’s plan would have made a lot more sense if, instead of Albert Finney, Kincade the groundskeeper was played by Vin Diesel. Of course Bond would have wanted to lure Silva and Co. back there, with Riddick as his secret fucking weapon. The two of them in combination would have made short work of Silva’s enthusiastic but barely competent henchmen.

If the makers of Skyfall had thought of this, we may not have lost Dame Judi Dench.

Film: March of the Penguins
Role: Narrator
Okay, this is where it gets controversial. There’s no denying that Morgan Freeman is pretty damn perfect as the narrator of this film. But here’s the thing: Morgan Freeman is a god among men (literally, if you assume that Bruce Almighty is a documentary). He is the perfect narrator for anything. He could read a pamphlet for colonic irrigation and make it sound riveting. The end result being that we don’t have any idea whether penguins are at all interesting, or whether the success of this film is simply due to the Freeman Effect.

If Vin Diesel narrated the film, on the other hand? With his somewhat less dulcet tones delivering the same messages we’d surely find out, one way or another, whether nature’s groomsmen are the fascinating little fellas Morgan Freeman portrayed them as, or just another bunch of dumb fucking birds.

That’s just four films, but I’m sure there are heaps more that Vin Diesel would have knocked out of the park. If you have any suggestions, please feel free to leave them below, and we’ll forward them to Mr Diesel’s agent.

Hey, buddy, where you been?

FWIW – Jason Statham is the “villain” in the next Fast & Furious movie (#7), and the trailer for the new Riddick movie is on the interwebs if you need more Vin Diesel _stat_. (Plus it has Starbuck and the “giggling children” sample from the 80s in it).

GREAT I am hanging out to see 7 Fast 7 Furious.

Also I got briefly excited about your mention of Starbuck until I realised that you probably didn’t mean Dirk Benedict.

Thank you for this. When they reboot Sex in the City with a new cast (which should be any minute now), I’m hoping Vin Diesel will be the new Samantha.

Didn’t they make that already and call it The Carrie Diaries? Vin Diesel would be awesome in that show.