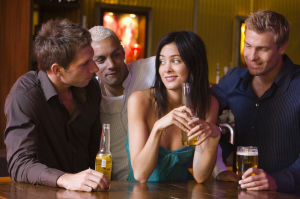 Negotiating the dating world is a minefield these days. I saw that video with the woman being harassed as she walked through New York and I realise that I do that! I try to be friendly to women just saying hello but now I’m concerned that I’m harassing them too. How do I hit on women safely without being a jerk?

Thank you for your letter. I was convinced that the first letter I received was going to be made up by Lord Sutch, asking me the sort of questions that only Mike Diamond is qualified to answer (I thoroughly recommend watching Mike and Matinga’s youtube video Homewerq: The Boy Who Cried Wolfbagging if you’re in need of a giggle and have a ridiculously prurient sense of humour. Don’t watch it at work though. That shit could get you fired).

The key to hitting on women safely without being a jerk is the ability to imagine how your actions will feel to the female who is the recipient of your interest. Many women do not want any attention from people in public in any form. They just want to walk down the road without feeling as though their physical appearance or their clothing selection is being evaluated by random strangers. They didn’t pick that skirt for you, they picked it for themselves or for their partner or for the hottie they sit near at work. If they are interested in exchanging chit chat, they will initiate the exchange, thanks very much. If they haven’t initiated conversation then they’re not interested. Full stop.

What about chicks at bars and parties though (I can use the word chick if I want to because I am one, FYI)? If I’m with a friend then I will feel far safer when a random says hello, especially if I’m in a public and convivial place, like picnicking in a park or having a drink outside in a beer garden. If I am alone and a stranger comes up and starts talking to me, part of my brain will immediately start wondering whether this man is a threat. It’s really sad that I have to think that way, especially given so many men are not creepy or threatening and, like yourself, are going out of their way to try to behave respectfully to women. But as long as we live in a society where sexual assault and violence against women occur, that’s the sort of thought I need to have to stay safe.

For my money, the easiest way to meet women who are interested in men hitting on them is via online dating sites. Not Tinder or whatever the young people are into these days, but old fashioned online dating sites where people actually have written profiles (admittedly, I am biased in that I am the sort of sick person who is more concerned about someone’s capacity to write in grammatically correct sentences than their ability to give good selfie). The great thing about online dating is that right from the get go you know that by virtue of being on the site, a woman is potentially interested in being hit on. Unlike women that you encounter in your daily life, you don’t have to worry about sussing out whether she’s single or straight. And unlike hitting on friends or colleagues, you don’t have to worry about the humiliation of having to still see them regularly after your best pick up moves don’t go down well.

If you’re on an online dating site and you see a profile of a woman who interests you, send her a short message telling her what caught your eye about her profile. Don’t send generic, ‘hey, what’s up’ messages because she will have been sent 25 of those messages this week and it makes her carry the conversation. If she doesn’t respond, she’s either busy or doesn’t know how to tell you she’s not interested. Either way, move on. If she responds, you can spend some time writing back and forth getting to know each other, but I recommend meeting in person before you’ve written the equivalent of a novel to someone, especially as you just cannot tell whether you two will feel that elusive spark of physical chemistry unless you see each other in real life. And of course, you may not have to fulfil any traditional gender roles and initiate contact with women online because, presumably, there will also be women like me online, who are totally down with sending the first message rather than sitting back and waiting for men to make the first move.

Don’t send her a dick pic unless she specifically asks for one and you’re down with that. Unsolicited dick pics may be a fine way to catch some cock if you’re a gay man, but they tend to horrify, at worst, or entertain, at best, female recipients – especially if sent prior to any form of written communication. (Don’t worry, Awkward in Auckland, I know you’re not the sort of person who would send cock shots to online randoms, that bit was just for the readers at home).

Good luck, my friend. As someone who dates both men and women I really do understand how much harder it can be to read women’s body language than that of men. It’s because we’ve been socialised since a young age to send mixed messages: too forward and you’re a slut, not forward enough and you’re a prude. I personally make it a policy to make my intentions very clear when hitting on people but, then again, I’m old enough to have made my peace with my inner slut, and I’m fortunate enough to have never been sexually assaulted, unlike far too many of my friends.

Sorry if this was a little serious, readers, but this seems like a sincere letter from a lovely man who wants to treat women respectfully (or Lord Sutch is better at faking letters than I thought). If you want something lighter next time, then you need to send me letters that lend themselves to such a response. Hint, hint.

Have a great week, my lovelies.