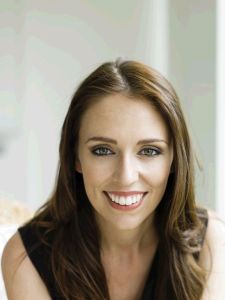 She’s pretty much everyone’s favourite Labour MP. Despite all the in-fighting and muck-raking and general ickiness that has beset the Labour party over the last  interminable period, Jacinda Ardern has maintained a position above the fray. Quite the remarkable effort. If she had achieved nothing else but that, you would say her career had been a success.When the party went through its latest round of public bloodletting, Jacinda was by far and away the preferred candidate of the public’s to become leader. She wasn’t even standing.

She’s also the trendy member of the Labour party. Everyone loves Jacinda. She does DJ-ing! She goes on Seven Days – hell she’s friends with some of the comedians. She really is the Labour MP who connects best with the ‘yoof’ of today (Grant Robertson’s acolytes aside).

And that image isn’t bollocks either. She is genuinely a cool person. And not in a phoney way. I get my first glimpse at this by the wonderful rapport she has with her assistant (who is also awesome by the way), this is the hallmark of someone in a position of power who gets it. How do they treat those in a less privileged position than them?

As I’m being lead through the halls of Parliament to the Jacinda’s office, her assistant tells me that Jacinda has been in the same office for her entire six-year career as an MP. And that the office used to be Katherine Rich’s. Which Jacinda used to think was cool. Used to.

The obvious first question is if she’s disappointed in the result of the leadership election. She hitched her wagon to Grant pretty early, declaring she would be his deputy if he was elected. Then he wasn’t. Then there was that sad-face picture of the two of them standing side by side at the announcement. Jacinda said it’s a “different kind of disappointment”. She said the general election was a far bigger disappointment because she wanted so badly to be in Government. Whereas standing in a leadership contest was akin to “running for class president.” The cheerful disposition doesn’t falter, not for one second. Jacinda said she likes all the other contenders in the leadership race so she’s ok with it. I guess the implication being she doesn’t like the other contenders in the General Election.

I asked how the election went. “Sub-optimal”. I said “you mean shit?” she said “yeah, really bad”. I wanted to know if she knew it was going to be that bad. She said that she likes to think she isn’t stupid and so could kind of see the writing on the wall, but you have to keep believing that you’re a chance so you can keep going. You’ve got to believe. Because if you don’t believe then how do you keep fighting? How do you keep inspiring your volunteers to keep … volunteering?

Where’d it all go wrong then? This question is in the ‘too hard to boil down to one thing’ basket. Which is probably one of the more sensible answers I’ve heard. A major player in the shellacking though was the Labour caucus was a “small team” and everyone “needed to look collective.” I guess she left out the rest of that sentence which I presumed would be “and we weren’t”.

Her desire to be in Government is real, and it’s heartfelt. She tells me that her “desperation for Government is on behalf of the people”. She finds it really – and truly – disappointing that people thought there might be MPs prepared to throw the election just so Cunliffe wouldn’t be Prime Minister (note, she didn’t explicitly say Cunliffe but rather talked of “preventing one person from having a job”. Which seems euphemistic).

Jacinda was suitably effervescent about the qualities of Andrew Little’s leadership, he’s “very inclusive in his decision making”, he’s made it clear it’s “time to get on” and he’s a good man. I asked if he’d offered her the Deputy Role and had she turned it down? Nope. It took a little bit of probing to get to that, but once we got past the politicking answer she was very honest and upfront.

Moving on to other leaders, did she know why John Key was so popular?

“It’s quite hard to answer when he doesn’t appeal to me”.

That’s my favourite response so far. She said she’s had it explained to her many times why Key is so popular – people find him relatable, he seems a nice guy, he’s the ultimate politician – but “he doesn’t appeal to me”. She concedes he’s very good at what he does and believes that it was Key who beat Labour more than it was National.

What about National then? Have they done anything well?

“They co-opt popular policies and don’t repeal them”.

“They govern but don’t progress”.

She says that National stay well away from the precipice of controversy (well, as far as they can), they avoid social policy – or they may add a tidbit. Or flags. Flags flags flags. That’s the major contribution of National’s social policy. Let’s have a chat about flags. Maybe hang a new flag on the Harbour Bridge? Maybe not. Maybe change the flag? Who knows? FLAGS.

Speaking of social policy, I’m interviewing Jacinda right before she needs to go to the House to debate Sue Moroney’s Paid Parental Leave bill. That bill would have extended our paid parental leave from 14 weeks to 26 weeks. That would bring us into line with most other western countries. But National said no, no that wouldn’t happen. Even if the bill had the numbers to pass, National would veto it under spurious reasoning. However, having read the writing on the wall the Nats introduced their own policy that would extend it up to 18 weeks.

Labour has accepted that Sue’s bill will now not pass however they asked the Nats if they’d extend the PPL from 18 weeks to 26 weeks for special circumstances. Those circumstances include giving birth to:

Hilariously, the Nats just said no. No. Which frankly seems fucking mean.

One of the cool things about Jacinda, and I think the contributing factor to her popularity is how relatable she is. She seems like someone you could just go up to and say hi. And in my experience that’s exactly what you can do. I’ve had twitter conversations with her – she’s a really good user of social media actually. We talked about that – firstly in the context of sexism. She said she has experienced absolutely no sexism from her peers (putting her at odds with Judith Collins who said she had experienced it). Though later that day her party-mate Phil Twyford mimed a clawing action at Paula Bennett.

However she has copped it online from people. “Horse-faced slut” and “I wouldn’t let her anywhere near my dick” were just two examples she raised. Keep it classy New Zealand. Sometimes, Jacinda said, she likes to respond to these people because she’s “sure that they don’t think I read their messages”. I can only imagine the discomfort these Internet warriors feel when confronted by the person they’ve just been an absolute asshole to.

Under this new regime of Labour, Jacinda is no longer spokesperson for Corrections and Police. Now she is Justice Spokesperson and Small Business Spokesperson and … Children? Spokesperson. She told me she would have been “happy” to continue in her other portfolios but is looking forward to getting her teeth into some new ones. As I’d done with Andrew, I asked her about marijuana law reform. Once again I didn’t really get a clear answer, so much as a “we must have that debate”. Which is a bit meaningless I realised as I left. Because so what? Have the debate?  What does that even mean? We’ve been having the debate, there’s a wealth of evidence to support changing its status and yet … nothing.

Jacinda’s got a couple of anecdotal points around pot. She likes that we currently focus on a harm minimisation policy, and she doesn’t want to see our prisons being needlessly filled by people who have been convicted for drug offences if they are minor, but having said that, she “grew up in Morrinsville” where she saw first-hand how destructive drugs can be to her peers. She doesn’t want to see that.

I ask her if she’d be prepared to tell me the drugs she’s taken. She laughs. And says “Let’s just say I’ve been a young person”. I chide her for co-opting Helen Clark’s famous “I was a student in the 60s response”. More laughter.

We’re starting to get to the less serious questions now. I ask her what movie or TV character she would like to be. Rather than a specific character, Jacinda picks a trope. She’d love to be the “kick-ass girl spy” who dresses in a black outfit, wears practical boots and “has three places to hide her gun”. Her desire to be this Lara Croft/Mrs Smith type character is because she thinks that she is so far from this person.

I also ask her who her hero is, I expect her to say Helen Clark, but she surprises me and instantly responds Ernest Shackleton – the speed of the response shows she’s given this answer before, so he must be a genuine hero of hers. Or it’s a well rehearsed response.

She’s particularly taken by his failed attempt to cross the Antarctic from sea to sea. The endurance of what he did, with the crappy equipment, managing his crew – and then knowing when to give in. She expressed it as an admiration for “his near death experience, faced with such English decorum.” I’m sure parallels could be drawn with Labour but I elected not to go there.

We then turn to matters less savoury. On the day I met with Jacinda it came out that Jan Logie had been in communication with Cam Slater despite Russel Norman saying that only Kevin Hague from his caucus had. I ask Jacinda if she’s ever been in contact with Cam. She said she “happened upon him” a few years ago when he and Farrar were doing “some kind of road-trip together”. I think that must be the road trip where they went up and down the country saying that Helen Clark’s Electoral Finance Act Bill was so anti-democracy that Helen was just like Robert Mugabe.

Jacinda assures me that other than that encounter she has not had communication with him – though I’ve spoken to others who have said that often Cam writes to MPs with unsolicited communications.

Following my interview, Jacinda sent me a Twitter DM thanking me for a “fun time”. That was a new one. People I interview usually suffer in silence – but Jacinda went out of her way to thank me for taking up her time.