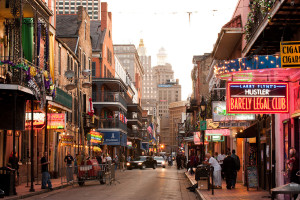 Bourbon Street, not that classy

A month or so ago, the brilliant Morgue wrote a wonderful piece about online call out culture. I’d like to take a look at something similar but not the same. Real-world call-outs.

“Was it your first time in N’orlins?” he asked.

“Did you get up Bourbon Street?”

“You wouldn’t want to have gone too far up Bourbon Street” he cautioned, “that’s the fag end of town”.

The fag end of town.

This was 2010. Fag was not a cool word then. And yet that’s how he described the gay quarters of New Orleans. The fag end of town.

I was fucking horrified. But I was also seated next to this dude for the next few hours, so I laughed awkwardly and buried my face in my book (it was Cormac McCarthy’s The Road if you’re wondering. Good book.).

Ever since then I’ve felt uncomfortable thinking back on my behaviour in that exchange. I wish I could go back and do it all over again and call him out on his choice of language and warning that I wouldn’t want to go somewhere gay. Because bigotry is shit. And it will only change if we do something about it whenever we witness it.

This very long pre-amble brings us to last week. I wanted to buy a new suit. So I went into one suit shop and spoke to the manager. He asked me if I owned any other tailored suits. I said yes, three. He asked me where they were from. One was from a local tailor while the other two were, as I told him, “likely to be from some slave sweatshop in Bangkok”.

“Oh” he said, pointing to his Asian colleague. “We have one of those”.

This was the New Orlean’s guy all over again. But this time I was prepared to call him on it.

“Did you know, that casual racism doesn’t actually endear you to customers?” I asked.

Then his Asian colleague said “I’m actually from Vietnam”.

Having called him on it, I then gave him a chance and we continued talking about suits.

But then he started making sexist comments towards the young woman who worked with him too. I said “Casual racism and sexism? I think you’ve really badly misread me”.

He said that it was fine because they “made comments like that all the time”. Oh well in that case…

“Don’t we darl?” he asked of the woman colleague. She laughed. Politely.

I said to her “You don’t have to laugh because he’s your boss you know, this isn’t really acceptable.”

And I walked out, telling him I’d be in touch. And I will. I’m going to email him and say that I’m choosing not to shop at his store because his behaviour wasn’t acceptable.

But I’m the exception here, I know that. I have an ego the size of a house and I’m prepared to plough through socially awkward situations like publicly calling someone out for this. And not everyone is prepared to do that – and I totally get that. So I don’t really know what the solution here is, hell I don’t even know what the point of this post is. I don’t want to publicly name the store because if there is a backlash, then that will probably be disproportionate to the crime.

I guess this post is a warning to people who deal with me, if you say shit that is bigoted, I will call you on it. Because that’s the only way I know how to try and change it. But I’ll take alternative suggestions. Actually that’s a better angle, how the hell else can we stop people being bigots if we’re not comfortable calling them on it (which is a totally fair response)?

And the shop was?

For the reasons in the post, I don’t think I’m going to reveal it. The internet has a habit of creating a backlash far worse than the original crime.

I’m sorry you didn’t call out the guy on the plane – I suspect his own discomfort would have been massively greater than your own, especially if your voice was just loud enough to be audible to others. Asking him what he’d say if he knew you were a “fag” might have been really entertaining.

Oh, well done! I think your final paragraph is the key – some people aren’t confident enough to do call-outs to strangers. Also, people tend to not like confrontation, particularly when they are not personally affected by the behaviour (i.e: you weren’t personally being discriminated against). I also think age plays a part, as you get older you tend to care less what other people think of you, or your opinions, so you worry less about expressing them. I get a buzz out of hearing teenagers do call-outs, it gives me hope the next generation might get some of this stuff more right than my generation has. My personal fav call-out is when people make racist comments, thinking my blonde hair and lily-white skin means I’ll agree with them, to which I reply “my [maori] ancestors and I take offense at that comment” – ooooo the rapid back-tracking that then occurs! I would have had no hesitation in replying to the man who sat next to you on the plane “why would I not want to go there, one of my best friends is a drag queen”, following which he would have been the one with the nose in the book for the rest of the flight.

another question could be: When calling someone out isn’t safe, what are the other options?

I remember getting in a taxi in former british colony that isn’t NZ, and the white driver telling me a long racist rant about what’s wrong with foreigners. He really meant foreigners who aren’t white, i have to assume, because he didn’t include me.
I didn’t call him on it because i had no idea where i was or what to do with an angry taxi driver .

Sometimes you have to tread carefully, though, and make sure you’ve read the situation correctly…

I was at a pub recently with my antenatal group and I tried to call out a minor sporting personality when he approached our table, struck up a conversation and drunkenly leered and pointed at my friends’ breasts. I said ‘that’s really quite offensive, you know’, getting that hot feeling in the ears that you get when you’ve decided to be brave.

Turns out because we were at a high table, everyone’s hands were on their drinks in front of their chests and he was actually pointing at their wedding rings, as he realised he was on a hiding to nothing in terms of picking up.

Kind of funny moment related to this: I’m part Asian, born and raised in the Hutt. I had to find a certain department at Victoria University and asked what looked like a senior lecturer dude if he knew where in the building it might be, he was stumped so asked if I would come with him to ask at a nearby admin area. We get there and he asks the whereabouts of the department “this gentleman” (me) was looking for. Admin staffer leans over her desk: DO …YOU… SPEAK… ENGLISH?? Professor and I stare at each other, mouths partially open. I take over from the poor, stunned, guy and painfully extracted the information from Vic Uni admin lady who still insisted on shouting slowly at me, despite my English being obviously perfect (by Hutt standards, I mean). Professor apologised profusely to me and was visibly upset; I could tell he was making the mental calculation of calling out this lady and whether it would cause me/him more embarrassment than good. Good on him. Stuff like that happens in surprising places.