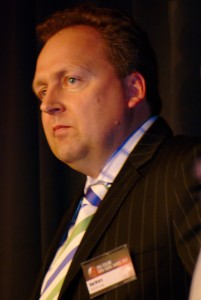 Rod Drury is an entrepreneur. Entrepreneur is a funny old word. It gets bandied around a lot. “Oh if only New Zealand had more…entrepreneurs”. I’m not even sure what it really means. Rod is though. I asked him and he had an answer. He has an answer to every question you throw at him and he delivers it in a forthright, confident and erudite fashion.

“An entrepreneur” he says, leaning forward, almost conspiratorially, “is someone who starts businesses. That’s what I do.”

It’s a simple answer to a complicated question.

That has always been the definition of smart to me. If you can condense complex thoughts into something the lay-person can understand then you’re a smart person. Rod is a smart person. Sometimes a little too smart. Occasionally a bit of jargon creeps into his sound-bites. We had breakfast together so it was an informal chat – in fact so informal that Rod thought we were just meeting as pals and didn’t realise I was going to write a piece about him. I felt a bit bad. But he was good natured about it. He even paid for breakfast.*

For years people have been saying that New Zealand’s problem is we’re not productive enough. That our productivity isn’t good enough. This to me was meaningless drivel. What is productivity anyway? Rod knows. He’s also got some good ideas on how to increase it. And he would. He’s created and sold a metric fuck-tonne of companies. He knows his shit.

He explained that one third of New Zealand’s revenue is created by the Government. Twenty eight per cent is created by large businesses and the remaining thirty eight percent are small or medium businesses. He said we’re a nation of traders and small businesses and we should be looking at how we can export better. He said that we aren’t really a chic european village, we’re closer to “Fiji with snow”.

“Imagine if every New Zealander, every organisation strived to export something. We’ve been fixated on exporting goods but we can now export services.”

He said when he was involved in the sale of TradeMe to Fairfax, many people in New Zealand blanched at the figure it was sold for (that figure if you can’t remember was $700 million. Which is a lot), I thought Fairfax got robbed at the time but Rod assures me this was entirely a fair price – and that New Zealanders need to embrace that things can cost a lot of money.

At times with Rod it feels like you’re sitting in a conference centre listening to a high-powered CEO give you his spiel on how he was able to rise above the masses. About how Xero was able to burst free of being held captive by New Zealand’s small town-ism. Before meeting with him someone said to me that Rod has the best script of anyone he’s met and I would be doing very well to get him away from it.

I put that to Rod and he agreed, he said that he repeats the same 10,000 words just about every day. But they’re not a script, they are words that he genuinely means. Does he get sick of them?

So in an attempt to get him away from his script I ask him about his Ngāi Tahu descendancy. I didn’t know he was Ngāi Tahu, I got it from his Wikipedia page (you know you’ve made it when you get a Wikipedia page. I am yet to make it). Does Rod embrace his Maori heritage?

He does. But his father does more. He said that his father – much like all fathers at one point in their lives – got the “where do I come from” bug and has been looking into it. Rod says that he’s waiting for a time when he’s not as busy and then he’ll pick it up also. However there is a part of him that is in touch with his Maori ancestry and that’s his investor outlook.

This was a strange metaphor to begin with, but as I’ve looked at it I think there is a beauty to what Rod is saying.

He says that Maori people take a long term custodial view. They didn’t own the land, they’re not even borrowing it, they are the custodians of it. They’re taking care of it. For now. And that’s how he views investments. It’s why he thinks that a lot of Iwi make very successful investors. They get it.

We also talked about his hobbies outside of work. Whenever that is. He said that he likes biking and paddle-boarding. He describes paddle-boarding as “surfing for fat people” and his love of biking has seen him scale Te Mata Peak in the Hawke’s Bay 350 times. He wants to get to 500 this year.

Not in a Muldoonist way, but he aims high and I get the feeling that this may be what separates Rod from your average run-of-the-mill New Zealand bloke. Where the New Zealand motto is just about “Pull yer head in mate, you’re not an All Black”, Rod aims for the stars. He wants Xero to be as big as Facebook. And he doesn’t see any reason why it shouldn’t be. In fact he thinks it’s on the way there. And he’s still surprised when others didn’t see Xero’s success coming.

He recounts a conference where he was talking to a room filled with accountants. He asked them how many had invested in Xero. Two of them had. Two. Rod finds this incredible.

“That’s two people out of a group of accountants. They didn’t see the change coming in their own industry”.

His unbridled confidence is impressive. I could see it as being jarring to some, but not to me. I love it when someone can be proud of their successes. I get a bit more spiel: 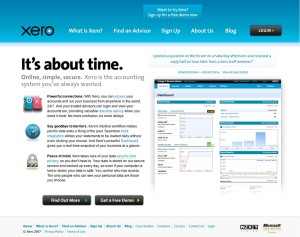 You have Xero chance. Ha. I’ll get me coat.

He’s not as right wing as you might expect either. His National Party proclivities are reasonably well covered, but he tells me repeatedly that he doesn’t believe that the invisible hand should be free entirely. Government intervention has its place. He’s a big fan of the Public/Private Partnership (or Mixed Ownership Model) but that the current Government really buggered up the messaging on that one. He also thinks National has alienated itself from the internet savvy voters through the GCSB and TICS bills. When I put it to Twitter that I was interviewing Rod I asked them for question ideas. One person suggested I ask him if he’d repeal those two contentious pieces of legislation. So I asked him! And when I asked him I thought he answered. But as I look back over my notes I notice that he didn’t answer specifically. He gave a classic piece of mis-direction. Well played Rod. This is why you’re a CEO.

Sky! We have to split content and distribution or the monopoly just moves up the stack. He doesn’t think this Government has the gumption to do that. But content! He doesn’t think the New Zealand consumer is getting a fair deal. And he keeps this mentality with his own business.

I reminded him of the “Apple of accountancy software” comment that someone had made about Xero. He wasn’t actually that chuffed with that comparison.

“Apple does cool design, but they have a closed eco-system and they don’t listen to their customers.” He said that Xero operates by setting a core set of values.

I wondered if it was his values that kept Xero in Wellington. Most corporates in NZ are based in Auckland, or if they’re not there now, they’re heading that way (see, Petroleum, British). When you think private corporates in Wellington you get Xero and you get Weta (maybe Infratil for the know-it-alls). But it’s not really values. Rod just likes it here. He says that Wellington is perfect for a software city. It’s funky and the weather is bad. This, in Rod’s opinion, lends itself to a “digital lifestyle”. He compares us favourably with Seattle. Same shitty weather, same level of “funky”.

He lives in the Hawke’s Bay now, and he told me he was dreadfully concerned about losing his regular table at L’Affare but he’s found a new coffee spot in the Hawke’s Bay, so he’s got a group who regularly meet for coffee up there.

I think the true value of Rod’s character came at the end of the breakfast. We went for a walk around Xero HQ (all Xero buildings are black. He currently has three of them in Wellington which he says is his way of turning Wellington into Gotham City. I’m not sure if he sees himself as the Batman in this metaphor). Every staff member we walked by said hi to him. They seemed to have genuine affection for the man.

After the tour, as I was getting into the elevator, Rod walked by a woman sitting at her desk.

“Hello” he said, “how you doing?” He kept walking.

“I’m good,” she replied, “I just bought an apartment”.

Rod stopped. He turned and came back to her desk. “That’s great news” he said, “well done”. Then the lift doors shut and I didn’t hear the rest. But from that exchange, it was clear that Rod gives a shit about his people.

“I’m not doing this to make money and buy toys” he told me. Those were goals from earlier in his life. Now he wants to build something that lasts long-term. A legacy item. Turning Wellington into Gotham City one black building at a time.

*I’m aware that I keep getting free meals out of these interviews. That is secretly the entire reason I run this site. Free food.