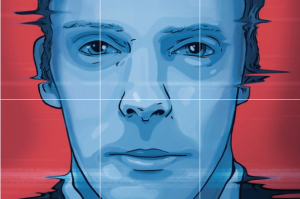 Tom Badsen’s adaptation of The Trial brings Franz Kafka’s everyman white collar worker kicking and screaming into the 20th century, and the audience comes along willingly for the ride. It is the story of Joseph K, a middle class man living an ordinary life, whose life is disrupted and ultimately destroyed when he is placed ‘under arrest’ by an ineffable authority, for an unknown crime.

Throughout the 95 minute running time, there were nods, chuckles and groans of recognition as Joseph K is bamboozled by an array of characters, from delivery people to receptionists, lawyers and co-workers, all who seem to exist solely to make his life difficult. Director Uther Dean and his actors have coaxed every last bit of humour from Badsen’s script and one could argue that Kafka’s work is even more relevant today than it was when it was written. Needless bureaucracy is rife in every walk of life and one scene in particular, in which Joseph K wrangles with a pair of ‘customer service representatives’, is all too frustratingly familiar.

Paul Waggott plays the straight foil to Erin Banks, Ralph McCubbin-Howell and Sam Hallahan, who show their colours as consummate performers, whipping in and out of different costumes and accents faster than you can fathom. When the play came to an end, part of me was surprised that only four people took a curtain call, as the well-realised characters and excellent staging had thoroughly filled the space in front of me for the preceding hour and a half.

The setting is enchanting. Creative lighting bathes the stage in warm, almost sepia tones, and the set is an amazingly effective use of the space available. There were some difficulties with lighting the actors’ faces when they were on the upper level, but on the whole, the hazy yellow light added to the dreamlike qualities of the piece.

Nick Zwart was responsible for the lighting design and set construction and Meg Rollandi designed the set and costumes. Between them, they have done a wonderful job, from the venetian blinds that are raised and lowered to reveal different sections of the stage at different times, to the double-level set, reminiscent of the cramped attic spaces in Kafka’s original novel. Every time you think there cannot possibly be a new setting for a scene, a trapdoor appears or a ladder is added and the stage is transformed anew. While I have a great deal of admiration for the set design and construction, closer attention should have been paid to sightlines, as I saw a number of people in some of the outer front seats craning their necks and struggling to see all the scenes. There were also a few teething problems with the operation of the blinds by the actors, but no doubt once they’re a bit further into their season, that aspect will be running like clockwork.

The sound design is truly outstanding. Tane Upjohn-Beatson has been making a real name for himself on the theatre scene and deservedly so. From the surreal rhythmic music that eases us through scene transitions, to computer programs and radio announcements, the sound design is practically seamless. There was a minor issue with the operation, in terms of timing a sound effect with an action on stage (a flogging) and it is an issue seen often in plays (gunshots are a particular problem in that respect, and this is a similar conundrum). Again, it’s one of those things that may come right after a few more runs.

More than anything, Joseph K is an actors’ piece. All of the technical elements are excellent, but without a strong cast to carry this script, the play would fall very flat. I feel a bit sorry for Waggott; as the harried Joseph K, his role is somewhat limited, although he works well through the progression from smooth arrogance to despair. The character of Joseph K, however, is very reactive, and his job is primarily to wonder what is going on as his world collapses around him. Banks and McCubbin-Howell make the most of their various roles, with some of their strongest work in evidence in the ‘customer support’ scene mentioned above. Hallahan does not have quite as much to do, but in spite of some awkward physicality him and Waggott in his first scene as Adam, Joseph K’s brother, he warms to his subsequent characters. His work as a bank staff member stymied by Joseph K’s unwillingness to help him is particularly affecting.

This is the kind of theatre we should be seeing more of in Wellington. It breaks with the conventional fare of ‘drawing room’ dramas, but the self-aware earnestness of some modern ‘devised’ works is not in evidence. For me, theatre should either edify or entertain (or both), or I don’t see the point in it. The lack of gravity with which the subject matter is treated is Joseph K’s strength, and, in fact, the only thing that lets it down for me is the ending (which I won’t spoil). It may be pertinent that Franz Kafka never actually finished writing The Trial and it was published incomplete, posthumously. The rest of the play is extremely entertaining and engaging, and it is great to see the works of the prolific My Accomplice theatre company moving from strength to strength.