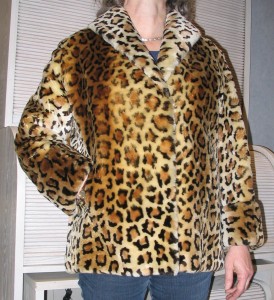 This was not the jacket in question. But it should have been.

This week Green Party co-leader Metiria Turei played the race card, accusing Corrections Minister Anne Tolley of a thinly veiled racist attack against her for mentioning the cost of her designer jacket.

The racist jacket row erupted after Turei told Tolley that she was ‘out of touch’ with everyday New Zealanders. Tolley, the MP for East Coast, one of New Zealand’s poorer electorates, wasn’t going to take that laying down. She slammed Turei back, saying that an MP without an electorate, who lived in a castle and wore $2,000 designer jackets probably shouldn’t go around decrying other people as ‘out of touch’.

Turei took the attack personally, erupting on to social media with claims that Tolley’s comments were racist and implied that a Maori woman from a working class background had no place wearing nice clothes.

Social media erupted back, with at least half of the posts on Turei’s telling her to pull her head in. Turei didn’t back down, and condescendingly suggested that while the Nats were talking about clothes, she was busy talking about what really mattered, like getting kids out of poverty.

So far, so much everyday politics in our high-minded Parliament. However, I couldn’t stop pondering too myself “What the hell Metiria? Racist? It might be snarky, but there isn’t a hint of racism in Tolley’s retort. You called her out of touch because of her position in life, and she challenged you back on yours.

Metiria is usually a balanced and relatively fair politician, and calling someone a racist is a big bat to swing. Perhaps it was my own white privilege that was stopping me from seeing the racism here? Perhaps my white middle class lens was stopping me seeing just how inappropriate it is to mention the cost of well-to-do Maori woman’s jacket. But I don’t think that’s it.

Then I thought, maybe Turei honestly experienced the comment as a racist attack directed at her as a Maori woman. It is entirely possible to experience racism where none was intended. In our everyday relationships how often do we react poorly when we think that we are being attacked at our weakest points, when in fact we were just being asked to pass the icecream?

Perhaps Turei was so primed to interpret criticism and attack through her identity as a tangata whenua wahine that she couldn’t see it as it was intended, a cheap but effective personal attack that Tolley would have dolled out to any opposition MP, be they a lesbian Inuit or a hedge-fund billionaire alpha male. But I don’t think that’s it either. Turei’s been in the house for a long time, and she knows the rules of the game.

I think, and it’s only a thought, that the Greens are turning into real politicians after all these years. And by that I mean that they’re turning into the type of hypocrites quite happy to throw around accusations and vitriol in order to win votes.

Turei’s comments were hypocrisy pure and simple. She knew she would get a rise out of Tolley by calling her out of touch, (or if not Tolley, then certainly Judith Collins). And when the inevitable retort came, which was no more personal or vitriolic than the usual daily attacks in the House, she deliberately invoked race.

Why? Because Maori votes are up for grabs at this year’s election. The Maori party has lost its mana among the Maori electorate and will be grateful to limp back in to the house with one electorate seat. Turei’s race card was a play for those Maori voters who feel victimised by the National party, which sadly (whether it is because they are, or because they have preconceived perceptions of victimhood), is a large enough voter bloc to put together a deliberate strategy to win them over.

At the start of this little episode Turei said that we must call out racism wherever we see it. Well we have to call out bullshit too Metiria, and I think I’ve got you on this one.

A letter to Minister Anne Tolley and Ray Smith, CEO of the Dept of Corrections

Walter, u are obviously white! From where I sit, it’s racist and typical and not uncommon!