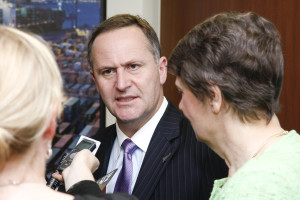 So like the huge political nerd I am, I did a bit of fishing.

Key gets cracking on Food in Schools

National Party Leader John Key has met with representatives of the KidsCan organisation today in a bid to expand and implement National’s Food In Schools programme.

And goes on to express his ideological support for private companies doing the hard work when it comes to feeding kids, instead of Government doing anything – which is consistent with this position on the most recent bill, however there’s a wee doozy at the end of the press release:

“Unlike Labour, I’m less interested about arguing about the size of the problem and more interested in actually doing something for these kids.”

Let’s check the Hansard of when Metiria Turei was hectoring the Prime Minister about hungry kids:

4.METIRIA TUREI (Co-Leader—Green) to the Prime Minister : Does he stand by his statement that the principals of decile 1 to 4 schools he has visited have told him “the number of children in those schools who actually require lunch is the odd one or two”?

Rt Hon JOHN KEY (Prime Minister): Yes, because that is what principals have told me.

Metiria Turei : How can it be correct that only the odd one or two kids in low-decile schools require lunch when KidsCan says that, on average, 23 percent of the children in the schools it works with are in need of lunch every day?

Rt Hon JOHN KEY : Well, I believe it to be true, and one of the issues I raised with the Minister of Education today was to ask her whether she, in her travels as the Minister of Education in the last 3½ years, had had the issue of lunch in schools raised with her. She told me that it has either never been raised or been raised extremely infrequently.

Rt Hon JOHN KEY : What I am telling the member is that, firstly, the Government has been working with a number of private sector organisations to provide breakfast in schools, and about 800—791, I think—schools out of 2,500, approximately, have taken that up. Secondly, I think there will be some children who go to school without lunch, but I think that number is actually relatively small. In some cases it will be one or two; in some cases it will be a few more, but I do not think it is as widespread as the member is purporting it to be.

It seems like the politically expedient thing to do is in fact split hairs over the number of kids who are hungry, instead of getting on and just fucking doing something about it, aye Mr Prime Minister?

A reminder: If you want to email all the MPs who voted against the bill, you can do it in one fell swoop by clicking here.

Regarding “call-out culture”: the uncontained fury of the imagined teenage Tumblr feminist

Rage is a waste of energy.

Kids Can is a great charity.

You have a lot of readers who clearly support it.

Add a Kid’s Can donation box to the blog and harness that passion for good.