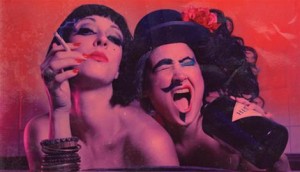 It’s probably not for you if you’re a prude, because the two comics are smutty as all hell It’s a sex-positive show that is very in your face with its …err…sex. It’s also hilarious.

Although I’ve only seen a handful of shows so far this year, this festival seems like the best one I’ve ever attended. And Perverts is right up there as one of the best shows I’ve seen. There are messy parts in it, but overall it is so entertaining, parts are so funny that you overlook the lapses.

It’s posed as a cabaret show starring the sultry diva Bernadette Byrne and her gender-ambiguous and hugely psychopathic sidekick Victor Victoria. The show contains songs, banter, a lot of audience interaction and some of the darkest comedy I’ve seen so far this year. There is a third character not mentioned in the publicity, Victor Victoria’s hugely malleable and comic face. In fact, so hilarious are the facials that he/she pulls that I forgot to focus on the words being sung by Bernadette and may have lost some of the humour. However there was ample humour in the reactions and tics from Victor.

The two comics pull it all off with aplomb. They are slick, well rehearsed and prepared for what the audience serves up when asked. Some of the meta-deconstruction by Victor is particularly enjoyable – like when an audience member fell back on a clichéd response after having been so witty up to that point, Victor asked, “are you a man of mystery? Or did you just not have time to think of something witty?” That may read abusive, but it was said with the deepest of lust and so the audience – and the audience member up on stage – laughed its collective ass off.

It’s a hard show to write a review for because I don’t want to spoil anything by saying song titles or ruining any of the sight gags, but it’s confronting. It is a testament to the two performers that they were able to draw as much out of a loving crowd as they did, given New Zealanders’ reticence to put their heads above the parapet. But we had men on stage giving their O-faces and others growling seductively – never being ridiculed viciously, but adding to the maelstrom of mirth we were all a part of.

And it was the inclusiveness that got me. No matter where you were in the audience, you felt a part of the show; not just watching one. My wife was lucky enough to receive a lapdance, other men were bumped and grinded upon and others got to fall victim to being accused of untoward behaviour.

The two performers are utterly magnificent in their roles. Victor Victoria particularly stood out as having a breadth of acting range to go with her insane amounts of talent on a variety of musical instruments. This is not to take away anything from Bernadette whose singing voice is magnificent, it’s just that Victor had the funniest moments and was provided with the most variety to tease out.

There are one or two criticisms I’ll make, firstly I think they were assigned the wrong venue. This show lends itself to a more cabaret style setting, so something with round tables instead of the normal theatre seating would have been a better option, and they certainly deserve a bigger room. Also, there were one or two moments when the duo relied on audience interaction and though certain audience members tried to be funny, those parts dragged on a bit. However, as I stated earlier, the parts of the rest of the show are hilarious enough to compensate for these brief lapses.

The show is artfully directed and so kudos must go to their director for the way in which he manages the two stars and puts them in exactly the right place and with the right timings.

They’re billed as Flight of the Conchords drenched in acid, but I would place them closer to mrs.peacock but with more interactivty.

If you’re keen to get to a comedy festival show, but not that keen on stand-up but are keen on sex, then this is 100% the show for you.

Go, get your pervert on, and enjoy a rollicking romp of a show. It is the ultimate feminist experience so far. Woman, on stage, owning sex.