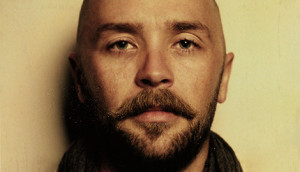 First off, this picture does not do Jamie’s beard justice. That is one hell of a beard.

A++ would beard again.

Secondly, Jamie has developed into quite a brilliant comic. He’s been around a while in New Zealand, has been nominated for a few top-flight awards but he’s never quite got there. His comedy was previously erratic. Frenetic as all hell, but patchy. He’s shelved 99.99% of the patchiness and is now something quite special.

He’s still frenetic though. This is comedy on P. He has boundless energy and throws himself around the stage and sometimes towards the audience with great affect. He talks at a million miles an hour and if you don’t keep up, well you’re going to miss out on some great gags.

It’s also comedy with heart. The show is a story of Jamie’s last 12 months(ish). And he’s had to deal with some shitty things. It’s another slice of this comedy-as-therapy that seems to be happening more and more frequently. It’s great, because we’re not finding out what the deal is with airline food, nor how annoying the blinky 12:00 light on the VCR is. It’s comedy that’s personal to the comic. And more of this please.

It’s also a risky way to go, which I guess is why so many shy away from it. As Jamie gives us another brick in the wall of his shitty year the audience gets sad. Each time Jamie brings the audience down I wait with trepidation to see if he’ll be able to bring them back up. And he does. Because he’s sufficiently funny. Every single time.

I think there’s a distinction between a funny comic and funny material. Some of Jamie’s material isn’t that funny, but because as an individual he’s so goddamn hilarious the audience doesn’t mind. We laugh along anyway. But the parts of the material that are funny then come together with the fact Jamie is naturally a funny guy and the result are some of the best gags of the festival. I think that when this perfect storm happened I probably laughed more, and louder than at any other show this year.

The show packs an emotional punch, all throughout too. It doesn’t finish on some big emotional climax, but rather has peaks and troughs spread out across the hour. Same with the laughs. There were gags coming that I thought would make great grand finale gags but they were done early. And then another one would come up. And another. And Jamie just found line after line, story after story, gag after gag to really really make you laugh.

I never expected to actually tear up both from laughter and from sadness at a comedy show. Jamie is a great guy, we’re connected through about three degrees of seperation and I knew he was a funny guy, but seeing his show really confirmed that for me. I really hope he continues to succeed in comedy.