Cricket and India, India and cricket 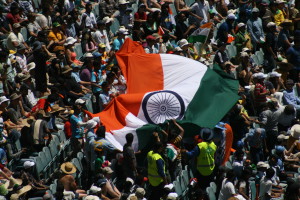 What exactly did the producers of Australia’s Today Show actually think was going to happen, in getting the host, Karl Stefanovic, to engage in an on-air sledging competition with Indian fans ahead of the World Cup semi-final?

I have sympathy for everyone involved, having made morning TV before and knowing the limited palette available to those who must front at that ungodly hour with helmet of hair and rictus grin a-fixed.

He was also joking and I get that too. But the “who is going to be manning the 7-Elevens today?” jest, along with calling New Zealand supporters, “the dole bludgers army” highlighted that what was humorous in 1961, no longer works. It no longer works, because it is no longer true.

India is not the India of yesteryear, New Zealand and New Zealanders have changed as well and finally the cricket that has been played at this year’s tournament is only now a true spectator sport dragging in those not brought up with the game.

On Tuesday I watched New Zealand play South Africa with my father. He was born in a city in India which later became part of Pakistan in 1947. He played cricket alongside Hanif Mohammed at school. Hanif was already in the test side and would wear his international cap out to the crease in school games. It was as intimidating as a teenage All Black wearing his jersey to turn out for Mt Albert Grammar. It wasn’t until 1994 that Hanif’s record for the highest total in the first class game was eclipsed, by Brian Lara.

The other thing that must be known about my father in the context of the “7-Eleven” comment is he is a cardiologist. Though in this regard dad is not special, in fact instead of considering what service stations and convenience stores might not be open when India plays cricket, it might be equally fitting to think what surgery is not being done or what computer code is not being written. Taking two months off work to follow sport on the other side of the world is not cheap, meaning the faces in the crowd are more likely to be part of the burgeoning middle class who are in our country to spend their money – that’s indeed, if we want it.

The Indian fan next to me had flown in from LA where he works in IT. There were so many like him in blue team shirts, and given their side wasn’t playing I asked if everyone had booked the tickets when it looked possible M. S Dhoni would be leading his men in the semi-final at Eden Park. “No, we wanted to see who was going to play India in the final. We are going to everything. We are supporting New Zealand now, because we think they will be easier to beat than South Africa.” The Swami Army at no point considered the possibility their heroes wouldn’t be at the MCG on Sunday.

The quaint attitudes of the past are also struggling to explain the success of the Black Caps. This is not the team of the 1980s, a band of stolid journeymen settling old colonial scores. At times it seemed the most uncomfortable characters in that particular play were those possessing true genius, Martin Crowe and Richard Hadlee. This team is also not the Young Guns of 1992 using screwball innovations, like opening the bowling with Dipak Patel, to unsettle their more fancied opposition. They are not even, the arguably more consistently talented side of the Fleming-Cairns- Parore years.

The team is different for one reason – right now this current Black Caps side is the best one day team in the world.

The moment of the tournament that showed that was not Brendon McCullum taking apart the South African pace attack on Tuesday or Martin Guptill’s 237 against the West Indies in the quarterfinal in Wellington or Daniel Vettori’s gravity defying catch on the boundary to dismiss Marlon Samuels, though it happened soon afterwards.

For me, the moment that signalled we were dealing with a totally different set of individuals, was when Trent Boult switched to bowling round the wicket to the incoming batsman Denesh Ramdin and picked him up LBW without scoring. The wicket was the result of the hours of analysis coach Mike Hesson does on the opposition. His bowler knew that was Ramdin’s weakness, and as Boult has done all tournament he executed the plan to perfection.

Lastly, cricket – the genteel English sport – born on the village green and now a flashy Bollywood star, is almost unrecognisable. On Tuesday, it rained in Auckland in the morning. In times of yore, the team winning the toss would have bowled first, to make the most of any moisture or cloud cover that would cause the ball to seam. A. B. De Villiers called correctly, but instantly elected to bat. Michael Clarke did the same two days later in Sydney.

The sport is now about pure aggression, no half measures, get in, make 350 and crush the life out of the enemy. The old game of containing runs is only played by the likes of England. Sides now are stopped only by taking wickets, so bowling strategies and field settings must be extremely aggressive. New Zealand plays the new game exceedingly well. Our plans are pursued with so much zeal in fact, that the frontline bowlers have mostly finished their spells before the final ten overs.

It has been in the IPL that Brendon McCullum and others have earned a fortune while completely revolutionising batting as an art in all forms of the game. The league has ensured that the one-day variety of the sport is now played at a pace that is drawing in non-fans, simply entranced by the spectacle. The World Cup has created a whole legion of new followers with no idea any of the game’s rich history even happened, nor do they much care, it’s appeal for them is very much in the present.

If one were to draw a common thread between all of these new revolutions and pleasing developments, it could be summed up in one word – India.

“The term New Zealand comedian is an oxymoron”

Blackcaps vs some guys

I agree there is something more than a little special about the style NZ is playing – it’s a new complete form of cricket which is incredibly joyful to watch. The destructive hitting of IPL and the aggressive field placements of test cricket. It wasn’t till the England game that the gulf between the styles of play became really apparent to me.

Still gutted that the way the knockout stages were decided meant that NZ missed out on hosting Pakistan. Like the significance and romance of playing France in the recent rugby final – oh what might have been.