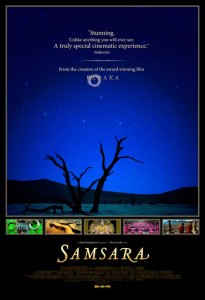 Samsara is the Buddhist concept of impermanence, or the constant flow of existence. Despite being unwittingly immersed in the idea my whole life (and possibly before too) I hadn’t heard the term until I saw the film. For the 99 minutes of Samsara not a word is spoken and the audience is treated to a vast pageant of haunting beauty. It begins and ends with Tibetan monks fashioning, then ultimately sweeping away, a sand mandala. Though in between the viewer is taken on a tour from African tribal villages to the routine banal slaughter of chicks in a factory farm to the mega structures of Doha rising out of the desert.

The concept is not an original one. Back in 1982 Koyannisqatsi was released. The first of a trilogy of such features by director Godfrey Reggio. The music was composed by Philip Glass who once said “”Music is a place and it’s as real Chicago or Indianapolis or the city you live in. Once you know that, you can go there.” But it was a quote from Reggio about why he had adopted this form which struck me: “It’s not for lack of love of the language that these films have no words. It’s because, from my point of view, our language is in a state of vast humiliation. It no longer describes the world in which we live.”

Just after World War II, George Orwell in “Politics and the English Language” expressed a similar disappointment in the relevance of language. Many words were almost totally empty, lacking a universal definition. “Fascism has now no meaning except in so far as it signifies “something not desirable. In the case of a word like democracy, not only is there no agreed definition, but the attempt to make one is resisted on all sides. It is almost universally felt that when we call a country democratic we are praising it: consequently the defenders of every kind of regime claim that it is a democracy.” Come on down, the “Democratic People’s Republic of (North) Korea”! 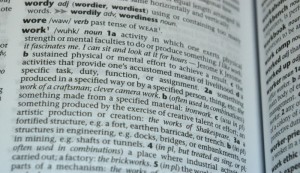 The limitations of our language are also defined by curbs on its use. These can be controls on vocabulary. Most newspapers rarely employ words which cannot be understood by a ten-year-old. According to another great man, KRS One: “We don’t see with our eyes we see with our brain so the more words your brain has the more things you can see.” It’s true. Unless we can describe what is before our eyes we have no way of consciously processing it and less chance of rationalising it. Inevitably the world becomes black and white, quite literally. Our emotional palette also is truncated. A musician releases an album and the press clamour to report it as “happier / sadder than the last”. In this milieu, people who can express themselves clearly without nuance and often as a result, highly inaccurately, become the masters of the universe.

A Different View, a show on now at the Gus Fisher Gallery is a bold idea with quite Olympian aspirations. It sought to look at the way, the heavy – though often unacknowledged – influence of pornography shapes our visual culture. I’ve interviewed one or two porn stars in my time. Only once did I make the mistake of running the “think of the children” and “does your mother know what you are doing?” argument as my line of questioning. Jessica Drake was her name and she made mince meat of me, though was sweet about it and left a signed photo. The lesson was – in our times – if an individual is of sound mind and body and their behaviour doesn’t do obvious harm (which always means physical harm) to anyone else, they can pretty much act as they please. Ms Drake told me her and fellow adult entertainers being driven topless down Queen St on a tank was the embodiment of freedom and empowerment. To suggest she should not be allowed to do so has become quite a sin. Porn is of course a business.  But because it has so closely associated itself with the extreme end of free expression arguments, its advertising in this form becomes treated as sacrosanct much like a protest march against mining or one for reclaiming the night.

Our visual culture in public is highly permissive. Katy Perry dressed as a cross between a Disney Princess and a Playboy centrefold is dished up to a massive preteen fanbase. It would stand out if she was unique in any way. Though should an objection be raised, Katy Perry would then become, not a multimillion dollar corporation but “an artist”. A real artist like Picasso before he decided to draw like an 4 year old, living in a garret with no running water, but sheltering an immortal vision.

On the flip side the language we use when interacting with our highly charged surroundings is strictly controlled.  I found myself chastised earlier this year when interviewing an Australian sex worker for using the term “streetwalker”. She rightly pointed out I had walked the street to get to our appointment without exchanging favours for money. For the record the correct assemblage of words in this instance is “street-based sex worker”. Currently the word “prostitute” is a bit iffy but “whore” has been reclaimed and is fine (though perhaps safest used by fellow street-based sex workers.)

None of this endlessly haggling over terminology does a thing to alleviate the root cause of inequality. But from the amount of energy we expend purifying what is spoken you would think the practice showered tramps in pure gold. I know some of you winced when you just read the word tramps. Come on, admit it. But if you said vagrant or person of no fixed abode 10,000 times it wouldn’t make the world a more equal place. When this whole caper was dreamt up, a belief obviously existed that unsafe language defined an unequal power relationship and changes would signify a sympathetic attitude. Those relationships have, in most cases, not altered a jot. If they have – today there is more inequality. The physical world spins further away from the language underneath it. All that remains are bourgeois coffee circles indulging in a side plate of sociology.

For this hybrid culture of X-rated pictures and timid quibbling words and acceptable social actions I have coined my own neologism. The mode of the times is most accurately described as debauched puritanism. But the endless pitting of one concept against another is just as tedious, like it’s all just a galactic game of badminton. Perhaps, let us for now dub all as samsara and blow away the iridescent sand.

The observation by Orwell about the irrelevance of language has been echoed by numerous others and it’s interesting that you bring up that particular comment about both Fascism and Democracy. Claude LeForte brought in an idea about how certain terms in society get capitalised (not in terms of the letter, though this does kind of figure into it, but more in terms of the meaning they get attributed). He argued that certain ideas and values (mostly within Western culture) have ceased to be descriptors and have taken on specific culturally contextual meanings which are constructed in relation to the ideology of the time. Basically that Democracy means whatever the current field of power wants it to mean (same goes for Fascism) – Democracy gets defined by Capitalism (for the moment).

Our visual culture is of itself a language, and you could probably argue that it is a more communicative process than written or spoken language these days.