Tim Batt went to a screening at the Documentary Edge Festival, the screening he sat in featured all three of the following:

The Characteristics of C-Minor 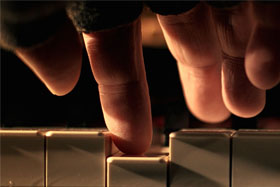 A very interesting and arresting portrait of a tortured artist. It’s beautifully shot and features appropriately moody musical scoring from the documentary’s subject himself, Nick. He is an interesting beast. He’s articulate, damaged and talented. Musically, Nick’s output had a Tom Waits darkness to it and in his monologues to camera provide clues both overt and implied that there is a history of deep personal pain. This moving short film concisely presents a story exploring artistic endeavour, human tragedy (and redemption, fortunately) and mental illness. Its 14 minute run time belies its emotional impact, replete with eventual optimism.

I found some of the imagery a little overwrought in creating visually interesting connective tissue to take the film from one place to the next but overall this is a deeply personal, voyeuristic and beautiful look into the life of a New Zealand artist, portrayed in a very refreshingly un-kiwi way.

The Secret World of Tim 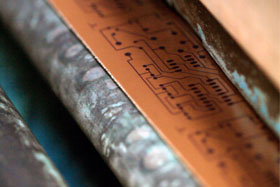 Whilst this locally made short may not be breath-taking, The Secret World of Tim is a fascinating and captivating look into the nucleus of our digital lives – the humble circuit board. Specifically, this excellently shot piece takes us through the production process of a board, following it through the heavy industrial factory line of steps involved in creating (what I’m guessing is) a custom board. I’m basing that assumption on the type of machinery used. They’re rusted, heavy industrial factory tools of old, incapable of the sort of output the pristine and sterile environments you’ll see in the mass production of modern computer processors. It’s strange to think about a circuit board manufacturing process looking old-worldly but that’s the case here and it makes for a very cool looking short.

The 80s style [CNC machines] complete with green screen displays coupled with a stripped back electronic soundtrack give this film a kind of Dadaist or Retrofuturistic feel which I really enjoyed. This first person view of the birth of a circuit board is engrossing, similar to watching a lava lamp but with a more satisfying outcome. The lack of any narration and sole human being on screen for next to no time (presumably the eponymous Tim) allows you to either mentally follow the machine literally or let your mind wander around the field of Man v Machine questions like how long will ANY humans be involved in the manufacturing process. Even if you don’t much care for the subject matter, it’s beautiful enough and short enough for all audiences to endure and hopefully enjoy. 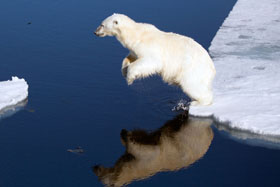 This feature event of the triple header is a triumph, plain and simple. I came into the screening knowing full well that it was made by a New Zealander, then somehow through the course of watching it convinced myself it looked far too good for that to be true and must have been made by a large American nature doco team (how’s that for engrained tall poppy syndrome?). So then imagine my double surprise at finding out it is almost solely the work of one New Zealander, Richard Sidey.

This 45 minute montage of creatures and scenes from both northern and southern hemispheres absolutely succeeds in the difficult task Richard set himself of making a nature documentary with no narration whatsoever. It has both a poignant and skilful narrative structure and absolutely captures the broad audience who have arrived to see it. Through a wonderful and perfectly paired classical soundtrack, the film uses musical cues to highlight moments of levity, sadness, pessimism and wonder featuring a cast of animals ranging from yellow-eyed penguins to whales to polar bears to manatees.

Ranging in scope from the close and personal view of seabirds raising their young to the crashing of vast ice shelves, Sidey has told a story of ice-loving nature with a huge amount of restraint considering how easy it would be to make this a NatGeo version of An Inconvenient Truth. Instead, the film maker has left the takeaways to you. Though the message and intent of the piece is clear, he is providing the evidence rather than the solutions to the issue of global warming and in doing so, this pieces becomes infinitely more palatable for younger viewers to join their parents in watching.

Instead of turning into a chest-beating call to arms for Prius owners, it’s a sober look at the beauty of sub-zero nature and unfortunately could be a visual audit of species we’re about to lose. In turn, Speechless is unbearably cute, awe-inspiring and scary. But mostly, it is a true triumph for Richard Sidey and his composer Miriama Young.