I did it my way (but no longer will) 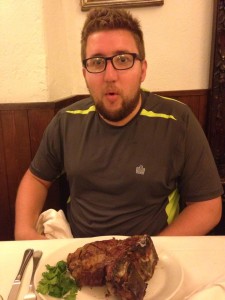 And now the end is near. And so I face the final curtain.

I set the Ruminator up in April 2013 (goodness they grow up so fast) because I had many opinions and I wanted you to hear them all. And now we’ve reached a point where I must pull back on my involvement.

You may have been following my job adventures on Twitter a wee bit lately. Well I’ve landed a job that I would probably consider right up there as “dream job”. I am the new Communications and Policy Director for the Green Party.

This means I won’t be writing politically for this blog. And also will no longer be the editor. There is a succession plan in the works and more will be written on that later. This will ensure that the Ruminator and Lord Sutch lives on, and that this blog will remain a place where many different political perspectives can be shared.

But don’t worry! I’ll still get to do pieces on other things (because SO many people read those….cough). So I’m still hanging out for that interview with Robbie Williams.

I want to thank each and every one of you who has come and read a piece on the blog, or followed me on Twitter. It’s been a blast and I’ve loved just about every moment of it.

The real major reason I set up the blog was so that ‘amateur’ writers could have a space where their work would be published and be seen by a fair-few eyeballs so I hope that the person I pass this on to continues that. However that won’t be up to me. I’ll just be a contributor (if I get the time!). If you do want to write for the Ruminator, email us! We can be reached on editor@ruminator.co.nz.

Thanks team. It’s been a blast.

It makes me sad that nobody has commented on this. And you won’t be receiving notifications any more, so no doubt you’re just sadly clicking refresh on this page.

PS While you’re in there, can you fix the government? Ta.