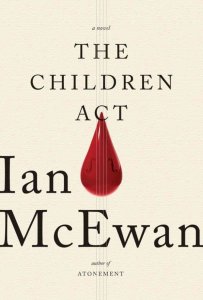 There’s a lot of naming in Ian McEwan’s most recent novel, ‘The Children Act.’ Fiona, a High Court judge in the Family Division is praised by the Lord Chief Justice for her “godly distance”. When she acts to spare the life of a young man—though legally still a child, who is refusing a life-saving blood transfusion for a ‘rare form of leukaemia’—her first act is that of naming:

‘Let’s give him a name.’ She said it crisply and her tone surprised her.

In case the religious signification is unclear, his name is Adam, from the Hebrew for ‘man’. By finding in favour of intervention she restores him to life, in what might be described as an act of reverse creation. But by withdrawing back to her narrow orbit after her act, she becomes in turn, mentor (in the Homeric sense), Eve corrupting Adam, and finally, Judas betraying the Saviour.

In a novel that doesn’t seem to be all that invested in its characters the repeated signifying seems quite at odds. Rather like an over-enthusiastic instructor leaning over your shoulder, McEwan is too quick to point out meaning that is largely from the page:

All this sorrow had common themes , there was a human sameness to it, but it continued to fascinate her.

The trouble is that for all his sparkling prose, the characters have little interest beyond the narrative.

At times it’s like reading a bad Martin Amis novel—of which there are perhaps one or two —the prose positively sparkles, but his heart’s just not in it. Amid the at times essayist passages that describe Fiona’s stolid orbit in the courts, there are passages of sheer brilliance like his description of a Victorian chair in the flat:

He was settling into his chair, a studded word and leather piece with a look of medieval torture about it. She had never really liked Victorian gothic, and never less than now

Or indeed the description of Melanie, the 28-year-old statistician, with whom Fiona’s forgettable husband embarks on an open-affair,

‘a silent young woman with heavy amber beads and a taste for the kind of stilettos that could wreck an old oak floor.”

But it’s all too fleeting. In a characteristically short novel, McEwan lapses into court-room drama wearying the reader, giving the impression of length not measurable in pages.

So the appearance of Adam after sixty-odd pages, irrepressible, poetry-writing, not your religious martyr type, comes as quite a revelation. Here is Goethe’s Werther, relocated in Wandsworth General Hospistal. That he appears to be too quickly silenced, suppressed by a middle-class milieu that cannot sanction him, only adds to the impression of him as a figure of doomed romance. His joie de vivre quickly becomes too cloying, his theatrical “My Lady” not able to sustain a greater weight than he is given—which is not a great deal. He is a Romantic fantasy that would be crushed by the sheer monotony of the courts, which in fact he is.

Fiona sees her failure to save him as an abnegation of her duty to him under the Children Act. She has failed precisely because of her too strict observance of the law, merely offering survival but failing to offer meaning.

McEwan is apt to blame any failure in his characterisation of Fiona on the same set of circumstances on which she pins her failure to look out for the “welfare of the child.”

Both characters are apt to blame their failure on their own social milieu. Adam’s loss of god and his failure to replace the vacuum left behind with meaning, leads directly to oblivion.  Fiona sees her failure to save him as an abnegation of her duty to him under the Children Act. She occupies a negative space, suppressing by force of social convention the passion of Emma Bovary:

It was not contempt and ostracism she feared, as in the novels of Flaubert and Tolstoy, but pity. To be the object of general pity was also a form of social death. The nineteenth century was closer than most women thought.

Likewise, McEwan is apt to blame the failure of his characters on their social milieu. The places where Fiona fails as a woman character, the voice slightly off-key, the emotional distance, we are meant instead to see the effects of her “flight from her proper destiny,” her childlessness.

It all begins to sound like a fugue of evaded responsibility, to quote David Foster Wallace. McEwan’s presence behind his omniscient narrator—too controlling, too controlled—becomes so obvious at times that the narrative begins to veer towards pantomime, and you want to shout out, “Watch out! He’s behind you.” The overall performance is not dissimilar to that of Fiona’s & Mark’s recital near the end of the novel.Here is Mahler played by practitioners of the law, with all the seriousness of first-rate musicians, to an audience of the their peers.

We are lead through the annular corridors of the novel only to find our selves back where we started, older, a bit, but none the wiser.