Andrew Little is straight up and down. He’s a man of no bullshit. What you see is what you get. He’ll give you answers that are honest and thoughtful. That’s the narrative that he wants to build. 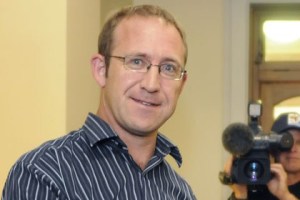 And for the most part that’s very true. There were a couple of times in my chat with him where the answers started straying into the mealy-mouthed territory but overall he was exactly as it says on the can.

Andrew’s got a lot of opinions, strong ones too. He doesn’t shy away from tricky questions. I told him at the outset that I wasn’t out to do a “gotcha” style interview, that if there was something he wasn’t comfortable answering he didn’t have to answer it; he went to great pains to say that he wasn’t that kind of politician. He’d do his best to answer all my questions because that’s the kind of guy he is. And he did do his best. There was only one question where he preferred not to talk and that was when we broached the leadership of David Cunliffe.

The most surprising opinion I got out of him was his 95 per cent-of-the-way refusal to support the TPPA (read here for Hadyn Green’s superb explanation of why it’s shit). This is in stark contrast with previous Labour leaders who have prevaricated over their stance. Oh they might hate it, but they might like it you know. They just weren’t sure. Not with Andrew. Andrew’s position was “I can’t see myself supporting an agreement that gives away sovereign authority.” His concerns were threefold: that the Investor State Dispute Settlement aspect would be too dangerous, that we would be handing over domestic control of our State Owned Entities to a trade agreement,and that the troubling IP provisions would do harm to things like our patent law and undermine the efficacy of Pharmac.

The caveat to this strongly held opinion is that Little doesn’t expect to see the TPPA pass.

Another opinion that was strongly held is his perspective about long-term MPs. He’s of the opinion that an MP is at their peak usefulness if they come in early on in their career, or if they do some other things in the ‘real world’ then become an MP. We specifically talked about former tobacco lobbyist Todd Barclay. He’s 24 and now an MP. What did Andrew think of that? Is Parliament an appropriate place for a 24 year old? “Yes, if he serves three or four terms.” He believes the current members of the Labour Party who have been round since the 80s will most likely be the end of the careerist politicians. He thinks when they go (and no comment was given to when that might be…) that we will see a shift to more short-term politicians.

We did touch on whether or not he was prepared to wave a broom through the party and rejuvenate. He didn’t explicitly say yes, rather he would be “requiring those MPs to do their jobs.”

His speech yesterday was reviewed by Vernon Small as being “underwhelming“, but then today, Vernon Small called it a “giant first leap“. Tricksy journalists. With their doublethink. Except Andrew didn’t view the pieces as mutually exclusive (that said, he also claimed he didn’t read too much of his own media so unsure how much weight I should give his perspective on this particular issue). He said he didn’t really have a set plan in place for “handling the media” and he would take it as it comes. He will be forthright, and honest, and straight up and down. Noticing a trend?

He thinks that society judges its politicians cumulatively. One news story in isolation does not define you, but rather the totality of those stories does. As a communications practitioner this is precisely what I tell clients. I advise them not to read media clippings, because they distort the picture. There might be a story about you on page 17 of a community newspaper and a story about you on page 2 of the Herald. These stories do not carry the same weight, but in the eyes of the clippings-surveyor, they do. It’s a mature perspective, one I haven’t witnessed from a lot of politicians. The other thing that Andrew has done recently that I was impressed with was from his speech yesterday. There was one line, one line I was really pleased to see:

I want to be clear, I’m not blaming just the current Government for this new era of squeeze and insecurity.

I love it when a politician has the objectivity to not just blame, blame, blame the other guys. I asked Andrew, what does he think that this current National Government has done well? He thinks that overall the Government has handled the Christchurch Earthquake aftermath well (current scandal notwithstanding). He also admitted that while Labour has beaten up the Government on its debt ratio, National sorta had no choice following the GFC.

Does he think John Key has been a good Prime Minister? 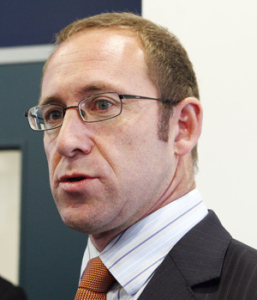 He doesn’t look this surprised in real life

He doesn’t really want to answer this, and gets out of it by saying that that this is better left unsaid until there is time between us and the Key-reign. He thinks that a lot of Key’s popularity is down to his judgement of response, and his ability to relate to New Zealanders. Little says that a lot of that is communicating with people. I mention that a Labour leader appearing on RadioNZ is preaching to the choir a bit and he may have to go on air with Veitchy etc, Little says he is not averse to this. That doing those sorts of media shows is part and parcel of the political world. It’s part of Key’s appeal. However he says that some of the sheen may now be wearing off, he says that Key has an “unhealthy relationship” with Cam Slater and “let’s see how that plays out.”

Overall though, this Government has not been to his liking. He delivers a wonderful soundbite when I ask him this.

“I ask, to those without power or privilege, have they progressed? And under this Government, no they have not.”

With his commitment to being straight up and down, we talked about marijuana decriminalisation. The short answer is that Andrew is not really a fan. The longer answer is that he’s not a fan, however he sees the “special status” we afford alcohol as being illogical and says that the distinction will need to be confronted.

He thinks that THC levels in New Zealand marijuana are higher and that decriminalisation would lead to more teenagers consuming it, ergo damage to still-forming teenage minds. He also wants more evidence-based policy in New Zealand. I put those two sentences together because they somewhat contradict each other. He’s made an assumption on THC levels which I checked with Ross Bell from the NZ Drug Foundation. Apparently no-one really knows about the THC levels, but in fairness to Andrew, it is widely assumed that THC levels are increasing.

As well as wanting evidence-based policy, he’s keen on delivering policy that the public is ready for. This means that some policies may require shelving for the time being (cough Capital Gains Tax cough), while others may require an education policy to bring the public up to speed before implementing something, but what’s important is that he brings the country with him. This may come as a disappointment for the uber-progressives out there, but they were already bracing themselves for disappointment when Grant Robertson wasn’t elected. Andrew doesn’t think it’s entirely fair that he’s tarred as the anti-urban-lib, he calls himself “very suburban”, he lives in Wellington and goes out to cafes and movies. Hell our interview took place in Astoria. The urbaniest liberallest of all the corporate cafes. But he says this doesn’t define him. He’s a former EPMU guy after all.

And as a good solid EPMU man he wants to take a serious look at a Universal Basic Income (unfortunately we couldn’t get into this with any depth whatsoever as his minder finally chimed in and said it was time to go). He called looking into it “unavoidable”.

Before he had to dash, I asked him which MPs from which other parties would he be comfortable seeing in Labour. He methodically ran through the parties. James Shaw was number 1 on his list, and his Green compatriots Eugenie Sage and Kennedy Graham were welcome. Tracey Martin and Barbara Stewart from NZ First could also come along, and National’s Alfred Ngaro was also invited. He then regaled me with an anecdote from a conversation he had with Jim Bolger.

“After Jim had finished as Prime Minister and was chair of NZ Post he said to me that the only reason he was in National was because Labour never asked.”

I’m not sure if that means the above MPs can expect an invitation anytime soon or not.

The final thing I want to say about Andrew is this, part of the Twitter crowd sourcing for questions had produced “Which TV or Film character would you most like to be and why?”

Andrew chose Captain Frank Furillo, the precinct captain from Hill Street Blues. His reasons were the following: he’s unflappable, and he’s straight down the line.

Little has obviously decided that a steady hand on the till is just the counterpoint to Key’s flash-harry style. It’s a brave and interesting move. It could work: so far he’s exceeded expectations. So to answer your question Giovanni Tiso, yes, New Zealand, may in fact be ready for a grey Prime Minister.

NZ is a Little country 🙂

Little taiking to a blogger after berating John Key and demanding he stops talking with Cameron Slater – Whale Oil. What a bare faced hypocrite

Thanks for your comment Graeme. I don’t think Andrew’s problem is with John talking to bloggers, but rather that one particular blogger who seems to engage in filth and bad behaviour.

So let’s see if I’ve got this right – what you seem to saying Graeme is:

Therefore Andrew Little having communication with any blogger is hypocritical?

…,if Cameron Slater had a red car, would that mean that Andrew Little communicating with anyone with a red car would be hypocritical?

…is the issue not that Cameron Slater, by his own account, a MERCANARY blogger – who uses his blog to try to attack people in a way that is nasty and malicious and overflowing with calculatedly fallacious argument (not unlike your own argument above) – focusing on the fact that he is a blogger is perhaps missing the point?

And Hitler was an animal lover, and Stalin was a hipster.

Re: THC levels in modern cannabis, I remember reading in Ben Goldacre’s first book (“Bad Science”) that the assumption about THC levels increasing was (at least originally) drug war propaganda derived from comparing some of the weaker pot from the 60s and 70s with the strongest you could get today.

Andrew Little is too narrow in his views. He’s too internally focused, mainly because he’s on payback. I could not imagine him footing it on the world stage with world leaders. He also needs to keep his anger in check.

As for Andrew Little’s “anger” – having listened to the whole of parliamentary debate on the day in question when Little was supposedly “angry” – his anger was somewhat understated compared to the mocking, scathing, derision displayed by Joyce, English and Key

Nice one, JK next.