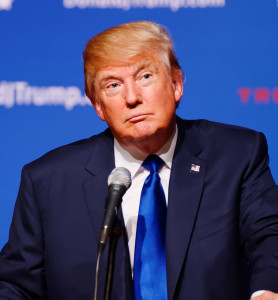 It’s unlikely that New Zealanders, Americans, or anyone else in the world will be looking at President Trump in 2016.

It’s a fantasy concocted for a specific segment of the population for reasons that are entirely profit-minded. Granted, it seems like a realistic fantasy right now, but it’s still not the real thing. Trump’s candidacy is like one of those fantasy camps where adults can go for a few weeks and pretend that they’re basketball players or rock stars.

The fantasy, which is indulged in by a not minuscule number of Americans, is that someone will go to Godforsaken Washington and tell those fancy politicians and those lobbyists and the liberal media what’s what, by God. These Americans want someone who will order the Army to grab all those Mexicans by the scruff of the neck and throw them across the border. They want somebody who will fire up “Proud to Be an American” on loudspeakers outside the White House, and send drones and Rambo and Seal Team Six to show those ISIS freaks how we handle our goddamned business in the Land of the Free and the Home of the Brave. They want a combination of a comic book super hero and a professional wrestler to combat all the perceived injustices that they believe are ruining every aspect of their lives. They want someone wearing an Uncle Sam costume to put his hands on his hips and say “Not so fast, Barrack Hussein Obama!” They don’t just want someone to be President. They want someone who will make the bad guys pay.

They aren’t going to get that, of course. They wouldn’t get that even if Donald Trump were to somehow miraculously win the White House. But Donald Trump makes them think that such fantasies are possible, and this is why he’s currently leading in the polls. It should be mentioned that “the polls” can be a bit misleading. These polls are handed out among likely voters in Republican primaries. If you ran that same poll by the vast majority of Americans who are lukewarm about politics, you’d get blank stares. I mean, we like our guns and our NFL and our all-you-can-eat buffets, but we aren’t fucking insane.

To be fair, you could make the argument that the people who are currently supporting Donald Trump aren’t insane either. What they are is extremely upset that things aren’t precisely the way they like them. Objectively, things are better now than they were ten years ago, in almost every way that such things can be measured. More people are working. Gas is cheap. It’s easier to get health insurance, and the health insurance that people are getting actually has to pay for your health care costs. But America doesn’t feel like America anymore to them. They aren’t too sure about this gay marriage thing. They’re worried about Mexicans coming in and taking their jobs. They’re pretty sure that Obama is going to send the government to take their guns. They hear “Black Lives Matter” as a combination of “Kill the Honkey Oppressors” and “Where the White Women At,” and they take a dim view of that culture in general, what with the rap music and the gold chains and the pants hanging off everyone’s ass, what if their children start dressing like that? They think women seem to be all polluted with feminism and are super uptight. They’re worried about that Arab family that runs the laundromat establishing Sharia Law, somehow. Probably with the help of those courts, who just seem to do whatever the hell they feel like, don’t they? And what about that Russian asshole one-upping the President of the United States, how it supposed to look when America is backing down on everything all the damn time? I mean, Reagan never did that, did he? (Of course he did. Multiple times on multiple occasions. But it never seemed like he did.)

These are the people who are flocking to Donald Trump in droves. This segment of the population are two very significant things: They are primary voters, and more importantly, they are a strong consumer demographic. They buy an endless stream of books that purport to tell the “real story” about Barack Obama and Hillary Clinton. They constantly check really shitty and mean-spirited websites and spend a great deal of time in the comments section. They listen to hours of teeth-grinding talk radio. They watch nothing but Fox News. They are what marketers call “a dedicated revenue source,” and if you play that anxiety the right way, you can make millions. (See: Glenn Beck.)

Donald Trump is selling his candidacy to these people the same way that he sells gaudy hotels and golf courses. Be loud, be brash, and give the people what they want, and God how the money rolls in. And right now Republican primary voters want to hear that everything will somehow magically be the way that they remember it back in the Good Old Days, even if that’s not really how it was at all.

Trump won’t win, and he knows it, and he probably doesn’t give a shit. Trump is the name on everybody’s lips right now, which means that more people will stay at his hotels, play at his golf courses, and watch his stupid reality TV show, and buy all his books, and all will be right with his world, even when he eventually burns out and all of his voters shift over to Ted Cruz, who is promising the same bullshit but in a more restrained and slick manner. Trump won’t win, but Cruz might, and that’s what ought to be making everybody nervous.

[…] is Part Two. Part One is here , a short write-up explaining the enigma that is Donald Trump and why we he’s not the most […]

How doe sit feel to be one of the greying and derelict liberal/ progressive establishment?

There might be a case for calling us derelict but greying? Really? I thought that was your core constituent: http://ruminator.co.nz/peaking-into-the-future/