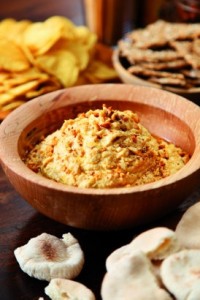 Sourcing ingredients: Easy – I think the most exotic ingredient here is chickpeas, which come in a can. Classy.
Total preparation and cooking time: 25 minutes
Serves: So so many. I halved the recipe. There were four of us. There was hummus everywhere.
Difficulty: Ridiculously Easy

I’m going to come right out and say it. I’m lazy. If I can buy something from the supermarket and it tastes good, I am not going to try and replicate the same thing from scratch.

Then I started this blog and all that went out the window.

Having friends over for dinner was the perfect excuse to bust out some Nigella goodness. Along with this hummus, I also made Slow Roast Pork Belly, which you can read about too. But not yet. Because I haven’t written it. Lazy.

Peanut Butter Hummus has quite a few ingredients. Pulling all of these out of the cupboard was about as hard as this recipe got. 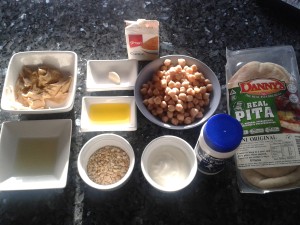 And arranging them perfectly for this picture

It was then a case of throwing everything into a food processor, with the exception of the greek yoghurt, chopped peanuts and paprika. I didn’t want to get my food processor out of the cupboard (see above for why not), so I used my stick blender that has a beaker type attachment. If I had been making the full recipe, there is no way that everything would have fit into it though. Something to keep in mind. 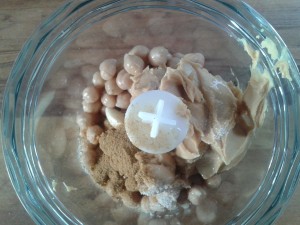 It would also appear I have bad aim 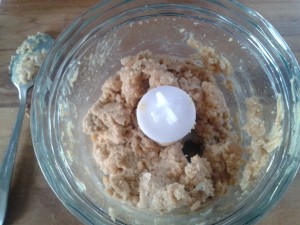 I can’t believe I’ve never done this before

At this stage the hummus was looking a lot like cookie dough. I added the Greek yoghurt and repeated the process. I added a bit more olive oil too. Because Nigella told me to and I’m not going to question her. 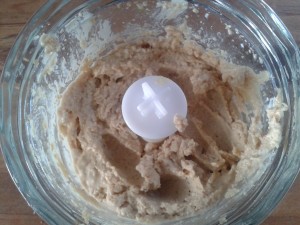 I put too much olive oil in. I know this because when I tried it, it tasted like olive oil. Thankfully Nigella recommends that you add more lemon juice and salt as needed. By adding both of these ingredients, it balanced the flavour back out and I was back on to a winning recipe.

I used a spatula and transferred it into a large bowl. Then I sprinkled the chopped peanuts over the top and dusted it with paprika. 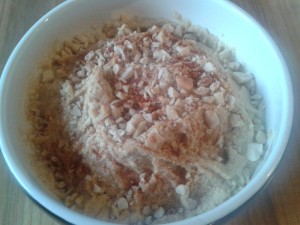 It looks so fancy

Nigella says you should serve the hummus with “an array of bits and pieces as you see fit”. I was serving this in conjunction with some other goodies, so I chose to just toast up some pitas and serve them alongside. As I saw fit.

It tasted like hummus! I thought it would be more peanut buttery and rich, but it mostly tasted like regular hummus. Pretty good hummus too. My guests were impressed, and if it wasn’t for the pork belly that was being served soon after, I’m sure we would have demolished all eight pitas smothered in the stuff. Maybe if I knew just how easy hummus was to make, I would have done it before. Probably not though, old habits die hard.

Obligations: or how I learned to grow up and iron a Goddamn shirt

So the question needs to be asked…was the juice worth the squeeze (or the hummus worth the blending?)?

I love hummus. I also love peanut butter. Peanut butter hummus would represent all my childhood fantasies come true and make up for the endless disappointments of Christmas’ past and present (contrary to popular belief, you can have enough Santa Christmas sweaters in your life).

What would you have done differently to make the hummus taste more like peanut butter? Is this even possible?

I think everyone should try this recipe at least once. For no other reason but to be able to say that one time you made your own hummus, and it was amazing.

To get a stronger peanut butter flavour, I would add more peanut butter (ta-da!). But keeping the right consistency is a bit more difficult. I would try using less chickpeas.

If it ends up too runny, add more chickpeas. If it’s too solid, add a combination of peanut butter and greek yoghurt. Without adding other ingredients (which would drastically alter the flavour), I think this is your best shot.

Let me know how you get on!