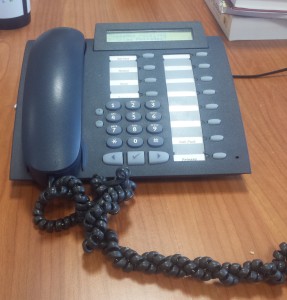 A while back I wrote a review on the Uniball Powertank Pen. I realise now that I have been tardy in reviewing anything else (except comedy. How much comedy did I review?). In order to keep the content churning on here I thought I’d review my office phone. Because that was the nearest thing to me.

So there you go. Someone, in their infinite wisdom thought that “semens” would be a good phonetic name for a company. You may not be aware of this but their subsidiary is called “Bawlsax”.

Getting past the fact the company is called Siemens (teeheehee), what does an OptiPoint 500 say to the consumer as a name? Well to me it says that this phone will be very good at pointing. Optimally so. At 500. Five hundred what? Well it must be 500 economies. Which ones? I don’t know, presumably the best ones? So not ours! Hohoho that’s some topical political humour.

Can you see up the top of the phone’s screen? No? Here, let me help.

Secondly, did you get a look at the cord? That bastard is twisted. So twisted. To the point now that if my phone rings and I try to pick it up, when I pick up the handset the whole bloody phone comes with it causing me to comically knock things off my desk and swear down the phone in greeting to whomever called me.

So functionality: not good. 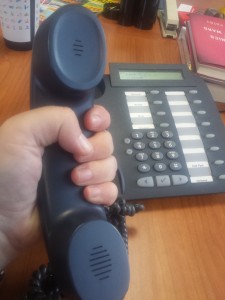 Can you feel my hand tonight?

Phone handsets haven’t really come a long way in my lifetime. Not since we did away with rotary phones has there been a dramatic shift in design (cellphones notwithstanding). With that in mind, my hopes weren’t high for the feel of OptiPoint 500 in my hand.

Well colour me surprised if it didn’t fit nice and snug in my hand. The curved arch of its slender back, the way it whispers sweet nothings into your ear, the way it hangs on to your every word. The OptiPoint 500 Economy is a tender lover of a phone.

If you’re into a bit of rough then this isn’t the phone for you. But if maybe you’d just like to be held sometimes, and told that you look nice and would you like your messages displayed? Well this is the handset for you.

The tactile sensation of the numbers is also just perfect. I have chubby fingers so I routinely run into problems in hitting the wrong numbers to the point where I just mash my hand frantically against the numberpad, hoping that the right number – in fact any number – will work so I can talk to someone. Anyone. I’m so lonely.

But not with this bad-boy. Each digit is clearly defined for my digits (phone humour). There’s even that little pimple thing on the #5 for blind people to orient themselves. Oh OptiPoint, you so considerate. The numbers also provide just enough resistance so you really know that you’re pushing something’s buttons. The soft gentle nature of the handset is compensated by the firm, throbbing, engorged numbers. Goodness.

I like to think the creators of Siemens were two young upstarts who thought it would be hilarious if the names of their company suite were all names that looked professional when you saw them written down, but when you said them out loud were entirely inappropriate.

“Haha, imagine if we call our company Semens, but add in an ‘i” so it doesn’t look like semen. But we’ll know it is! Ooo and also we could have another company called Ball Sacks, but we’ll spell it Bawlsax so people think it’s serious. It won’t be. But they’ll have to say ball sacks. Ball sacks! That my friend, is comedy gold”.

I could see that happening.

For advice on why phone cords get twisted and how to untwist them check out: http://www.davidalexandersmith.com/howto/untanglecord.html, I use and recommend the gravity assisted untangling technique.