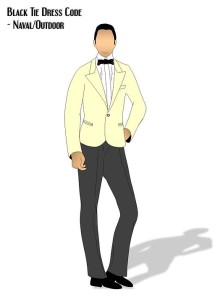 I’ve been invited to an event in the next few weeks which is designated as black tie. I don’t have any problem with this, and will almost certainly follow the dress code in its official, formal capacity, which is rather more complicated than many kiwis think. I’ve been to many weddings now where I’ve seen people in jeans and/or t-shirts, with sunglasses on their heads. I’ve seen neon green sneakers at a funeral. On the one hand, I see that kind of stuff and think “ugh. Make an effort. Show some respect.” I most often follow up these thoughts with “god I’m a dick – who cares? The happy couple certainly don’t seem to” (and my uncle would probably have been pretty amused by the sneakers. He was not a formal sort of man).

I don’t really know why New Zealanders seem against formalwear, or even formality in general. I know we are a laid back country, and I don’t think that’s a bad thing – the history of dress codes and dressing for dinner and snobbery and class bullshit is clearly somewhat unappealing. But isn’t the opportunity to do something somewhat ceremonial, reverent, or even ritualistic something to be embraced? How often do you get the opportunity to climb into a really fancy suit? I feel like taking the trouble and bearing the discomfort is part of the way you show your respect for an occasion, especially when you’ve been specifically asked to do so on the invitation.

I’m really struggling with the idea of whether tradition has any sort of inherent value. My initial reaction is to say “no, of course not – just because something has been done a certain way for hundreds of years doesn’t mean it’s good“, but then I do think that regardless of whether we like or approve of a certain tradition, a long history gives it weight. I think the weight might be value neutral, but that you feel it almost palpably when faced with hundreds of years of tradition in anything – architecture, music, recipes, language. That might mean that it’s important to stop it immediately, because a triumph over a decades-long practice that sucks is an even greater victory. It might mean that it is worth following, just to keep it alive. Adherents to the dress code of honour are aghast that Americans wear black tie before 6pm, and offended when they are told that they’re old-fashioned for saying so – but the truth is that traditions change (see wives, formal ownership of; Chrismas, religious observance of; etc) and clinging to something “because it’s traditional!” is a hollow argument.

So tradition: I don’t know. Case-by-case I suppose, find the goodness, ditch the rest. Triage your traditions. I’ve seen it work wonderfully at weddings – probably because a modern wedding is about a couple making promises to each other and celebrating those promises. They’re in charge, it’s their day, and you go along with what they want. If they don’t tell you what they want, think about it, make choices that honour the solemnity of the situation. And take your fucking sunglasses off your fucking head because you’re being a weapons-grade douchebag.

Bring it back: Creepy window displays