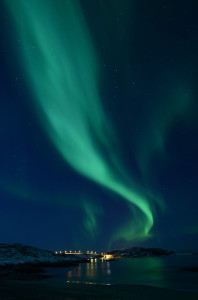 Like a green stream of wees running down the sky

Sunday night the lights turn up. In all their glory. Actually they didn’t come right to Trosmo’s door; we went on a ‘hunt’ for them and it did feel as if we were stalking a rare, coy, obviously nocturnal animal, albeit a bulletproof one. She didn’t stay hidden for long though. Five minutes’ drive out of Tromso we had our first sighting – a couple of long, lime green legs straddling the bay, like a scene from War of the Worlds…but I’m getting ahead of myself. The city itself deserves a few words.

For all its iced loveliness, the city of Tromso isn’t twee. For one thing they still managed to construct just enough office blocks to obscure our hotel room’s view of the mountains. There’s also no room to hide the drudgery of almost being a proper-sized city. It has the world’s northernmost University, a Burger King, chainstore-filled malls, too many service stations, and plenty of places to buy hot dogs at three in the morning – the last four things on that list likely being a result of the first.

Tromso is one of many cities to wear the ‘Paris of the North’ label. Others include Belfast with its sectarian violence; and Dawson City – full of Canadians, so not violent enough. Tromso with its Viking ‘heritage’* and modern Scandinavian liberalism has it just right.

In truth the comparison with Paris is way off. It’s squeezed into a small island a few hundred metres of mackerel-filled Atlantic water from the mainland. In this way, it’s more akin to Manhattan than Paris. The label also implies that the smaller town will be delighted just being mentioned in the same breath as its sprawling, dissimilar French cousin. If judged by setting, rather than being the sum of its buildings, Tromso is much more of a looker than Paris ever was. Tromso should be happy and proud just to be itself.

In fairness the Not-at-all-like-Paris of the North is a lot more expensive than the French Tromso of the South. Norway is the third most expensive country in Europe and a dedicated tourist town isn’t going to be the one to buck this trend. It’s hard to avoid this problem too. No matter how jaw-dropping the scenery or satisfyingly tactile crunching through snow is, there’s always the question of how long you can last before the cold wins again and you need to quickly return indoors for another financially crippling hot chocolate.

Tromso has the feel and prices of a ski resort town complete with the small town’s habit of people walking down the middle of the main street, greeting strangers for no other reason than having made eye contact. Shopkeepers are friendly, but not Disneyland/ porn actor fake friendly. They just smile, patiently explain what you need and why they’re better than you, and they’re right on both counts. They’re all 6’6” with glacier-white teeth, can ski uphill in 9 different languages and have around 12,000 years’ experience of layering when it’s cold out. Your job is just to stand there looking ugly, hand over last year’s salary for a scarf you didn’t know you wanted and leave.

On the night of our lights hunt, the van’s heater was broken, so (of course) they’d been right about the scarf after all. A few minutes after our first alien sighting, we parked up by Ersfjord, otherwise known as the ‘Northern Lights fjord’. There it was, Aurora Borealis in full flow – a brilliant, other-worldly green display swirling, waving and smearing itself over the tops of the mountains and across the far side of the bay, performing Munro/LeBrock’s heating vent dance for a few minutes, before spreading out and filling the sky directly over us. For someone who seldom smiles when he’s not wearing a full laugh, I was grinning like an Arctic fox. At one stage involuntarily laughing out loud just at the ridiculous beauty of it all. Norway has such perfect natural gods: I’m not sure why the Norsemen bothered dreaming up Thor and Odin when they had Ersfjorden and Aurora Borealis for real.

After the very best part of an hour the performance began to taper and we were on our way to another spot just down the road.

I haven’t thus far mentioned the cold. That’s because, for Northern Norwegian standards, it wasn’t. The night of our light show it was -11C. This is the coldest temperature I’ve been in, but what Guide Gunnar described as ‘T-shirt weather’. As it regularly drops below -25C he had a point. They like their cold cold in these parts. Tromsonians don’t throw around the ‘C’ word without good reason and they set a very low barometer for what constitutes a good reason. 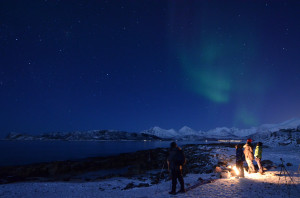 If anything the second showing was even more spectacular. Usually when I hear the phrase ‘words can’t describe it’, it will be after someone’s just won a new kettle on The Price is Right. Whatever ‘it’ might be I think “no, your words can’t describe it. There are plenty of words to choose from, just learn some better ones”. For all that, I was left speechless by the lights. None of my English vocab could do it justice. I reached for my French, but neither un autre café sil vous plait nor Je voudrais une glace felt appropriate either. After an evening of chasing this wondrous animal, then watching it play in its natural habitat, we were a frozen, elated, thoroughly sated group.

Or at least we were sated, before Guide Gunnar decided to pull out his ‘best-of’ snaps. Turns out it wasn’t quite in all its glory after all. If you know how to use Google, look up ‘Northern Lights Corona’. It’s like something Dante came up with, then pulled back for fear he’d gone too far.

These days whenever we’re parked in front of a screen we expect/ demand pyrotechnic wizardry. We’re so used to special effects being the norm,  we take for granted that the stunts we’re watching were really put together in a computer filled basement. That’s why things like the Northern (or Southern) lights need to be seen in person. Onscreen you’ve seen it all before. Up close and personal you know there’s no sleight-of-hand or advanced photoshop at work. Removing the filter of a screen and an editing room really does add something.

* ‘Heritage’ is apparently what mass murder becomes when you age it

All the best photos come from Guide Gunnar

This is some awesome writing. I don’t normally like reading travel blogs, but hats off to you, sir, this is excellent!

Thanks Bexx, very kind. It’s a touch over 2,000 words (along with parts 1 & 3) so I appreciate anyone making it even part the way through. With my attention span I know I’d struggle!

Thanks Steve, much appreciated!

PS: I can take credit for neither the first pic, nor its wonderfully evocative caption