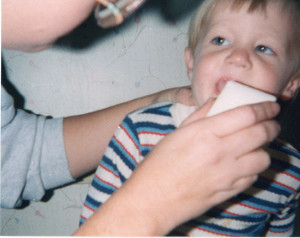 There are word taboos and profanity associated with almost every language. But to me, the idea of isolating certain sounds and empowering them to the point in which we aren’t even supposed to utter the word is an incredibly ridiculous concept.

If I am in front of an audience with a microphone and I just say one curse word like “cunt”, we can safely expect a large portion of the crowd to be offended and even the ones who don’t take offence will definitely look up and take notice. But is it really the sound we find offensive, or is it the context?

This is a simple example of two very similar sounding sentences with an almost opposite meaning. I simply transformed a verb into a taboo noun with the use of dramatic pause. So we aren’t offended by the sound because the sound loses its power when you change the context.

This is also supported by the fact that swear words are not universally offensive across different languages e.g. if I said to you “dong-muk-uh!” you would be intrigued, perhaps you would even be slightly impressed at my bi-lingual ability and firm grasp on the Korean language, but what is the translation? Eat shit.

Another important factor in our artificial creation of taboo words is of course education. At some point in our lives we are told which words belong in the profanity set and which words don’t. If a child swears (which they usually do in imitation) they will get a telling off. So if learning a language isn’t already difficult enough we have just thrown in some verbal landmines to the mix! Good idea.

“Learn these words! NOW GOD HELP YOU IF I EVER HEAR THEM COME OUT OF YOUR MOUTH.”

You read that last sentence out loud in your head and didn’t think twice about it, but what if I isolate the end of it and shift the context?

So what are we really doing when we tell kids off for swearing?

We like to think we are teaching kids what words are taboo so they can actively avoid their use. But in reality  we simply arm a bunch of kids with artificially empowered words and then send them off to school with an oversized backpack and an underdeveloped filter and of course, we all know how children/teenagers like to impress each other; flaunting rules and acting like ‘adults’.

Suddenly we have created a playground of kids running around saying:

“NO, I’M NOT TRADING MY FUCKING CHARIZARD FOR YOUR SHITTY JIGGLYPUFF”.

The earliest examples of profanity seem to stem from belief structures like religion e.g. displaying a lack of reverence for God or more simply; blasphemy.

But as religion is losing its grip on the world, blasphemy is becoming more acceptable in the mainstream.  “God damnit”, “Jesus Christ that hurt” and “suck my biblical nipples” are all fairly tame sentences that you could get away with around most people these days.

Some say it is because words like “cunt” reference the vagina so it is “rude”, but this is the same argument really. We too have created a vast set of sexually taboo words, even though your father had to get about negative six inches away from your mother in order for you to be created in the first place… for something that isn’t talked about it sure as shit happens an awful lot.

We can openly talk about livers, lungs, skin or feet and people will marvel at your ability to name body parts, but if you say “penis” or “vagina” people will get uncomfortable despite the fact they are two exceptionally clinical terms.

Of course, through time, taboo words come and they go – which only goes to demonstrate how meaningless the whole concept is. This is caused by a number of factors, one is belief systems as mentioned and another is market saturation. By using and hearing the word often, it causes word ‘depowerment’:

“Damn” may be offensive to your grandmother, but not your mother.

“Shit” may be offensive to your mother, but not you.

“Fuck” may be offensive to you, but not your daughter?

I am sure most of us remember Toyota’s iconic yet controversial ‘bugger ad’ from 1999 and looking back with 15 years of hindsight the whole thing seems awfully silly. Ironically, it probably isn’t too much of a stretch to assume the whole cluster-fuck created by the pro-censorship New Zealanders helped disarm the word and actually encourage more of its use (see ‘the Streisand effect‘). 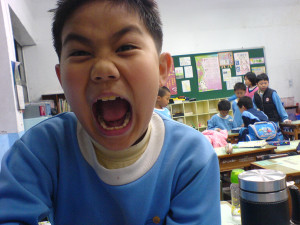 Though not 100% sure, I’m confident this child is saying “cunt”

For me, the most important thing and the only thing anyone should concern themselves with is intent. What should you be more offended by?

2. You have the face of an oversized octopus.

Probably the one with the ‘clean’ words right? Words in isolation and without malicious intent should not default to offensive. Allowing words to hold so much power that they have the ability to trigger a negative emotion is utterly ridiculous.

There is however some words which are legitimately taboo: racial and sexual slurs.

In our current lingual state these words still hold implied negative connotations, if someone uses the word they are almost always using it with the intent to offend. The only context that currently depowers the words is on an artistic platform like a comedy stage or a movie, or if you are part of the minority that the slur demeans (however it is important to acknowledge this is not a universal feeling).

So because of the implied malicious intent, taking offence to them is as normal as if someone called you an “asshole”. Remember; we should be offended by the intent not the word.

Of course, having swear words in a language is still beneficial for some people, including me. For one: it was proved by ‘Mythbusters’ (2010, Ep6) that cursing aloud increases your tolerance to pain (random words do not work as well) and more importantly it adds a weapon to the arsenal; we can escalate words up the profanity chain to really drive home our feelings:

“THAT GUY STOLE MY PARK”

just doesn’t have the same ring to it as

“THAT SHITCUNT STOLE MY FUCKING PARK”.

So, those of us who decide to be offended by a list of agreed words grant the rest of us an excellent verbal tool bag to demonstrate our mood. Of course, I respect people’s right to be offended so I still use a language filter depending on the environment I am in because I’m not a complete asshole.

Picture of child swearing from Sizumaru

Well…
That was thoroughly entertaining / That was fucking entertaining.
Great read / What a fucking great read.
I know which I prefer.
I most definitely love “fucking”.