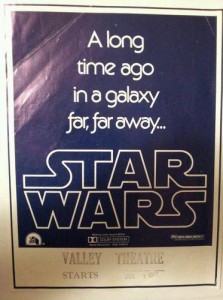 “Star Wars references are deeply embedded in popular culture”, says Wikipedia’s article on the subject. Why do we keep talking about Star Wars? Why can’t we get over it?

Star Wars was a hammerblow that knocked pop culture into a new shape, and it was uniquely well-suited to be the film that changed everything. It mashed together classical mythology, heroic tales from west and east, and European folk tales. Incredibly, in just a few decades it has usurped all three of its sources. At least in the English-speaking world, people are doing more with Darth Vader and the Jedi than with Odysseus or Heracles or Thor or Beowulf or Alexander the Great or the Monkey King or Baba Yaga or the Three Little Pigs. How did this happen? How were the collected high points of our cultural history so easily overtaken by a few films about spaceships?

At heart, Star Wars is a story about lineage (particularly fatherhood) nested in a story about justice (resistance to tyranny). These are ancient themes, and this is no accident. As Star Wars enthusiasts love to note, George Lucas constructed Star Wars with an eye on Joseph Campbell’s vision of the heroic journey that supposedly sits beneath much of human mythology. Now, anthropologists and classicists and others may cringe at overstated claims about this “monomyth“, but it’s clearly a mythic narrative of some power. This mythic structure is at least a pointer to why Star Wars has the weight it does: it satisfies instincts we have cultivated over centuries, or even millennia, about what makes a good story. In some deep and true sense, it feels right (or at least great parts of it do; and the bits that don’t feel right are easily overlooked).

The basics of Star Wars are as simple as a fairy tale: a princess held captive by a wicked knight in an impregnable castle. But there is much more sitting underneath that, unfolding outward from a frenzy of production detail and a hungry market for ancillary product. So much stuff that a Biblical analogy doesn’t feel too silly: the well-known New Testament of Luke & Leia against Darth Vader; the dense and over-interpreted Old Testament of Anakin and Padme and Jar Jar; the endless Talmudic extrapolations and cultic revelations of the Expanded Universe (not to mention the ongoing sectarian wars over translation and interpretation and fidelity: did Han shoot first? Is Jaxxon canonical?). Star Wars embraces both the simple and the complex, and that gives it extra power.

But all this complexity is really nothing more than proof that the simple core, designed to hook into deep structures, was also constructed so well that it captured the imagination. This explains part of its success in insinuating itself into our cultural life, but of course there is more to the story. 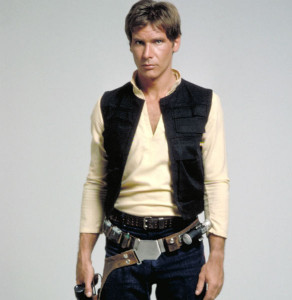 Has there ever been a film design that got so much right? Memorable concepts pile against each other, the envy of every other film: lightsabers and lightsaber duels; Darth Vader’s mask and cape and breathing; the odd-couple double act of a slender golden droid paired with a stumpy white/blue one; the cantina of aliens; spaceships as dogfighting fighter planes; the way blasters looked and sounded; Yoda’s way of talking; Chewbacca’s vocalisations; the giant slug look of Jabba the Hutt; the Death Star. Even the costuming managed somehow get away with being shamelessly literal: Luke and Leia wearing virginal white, Darth Vader shrouded in black, and the mercenary rogue Han Solo hilariously ambiguous with a black vest over a white shirt.

Character design was equally smart. Each character has an obvious drive and a distinctive style. Nearly every pair of characters crackles with interesting, dynamic energy: Luke and Han, Han and Leia, Han and Chewie, the droids, Luke and Ben – all great, clear relationships between distinctive individuals. There is drama built right into the core of these characters, which also happens to be the foundation of another quality that sets Star Wars apart: it features the greatest twist in the history of film storytelling

This set of images and sounds and patterns is deeply appealing. These things stick in the memory. That’s powerful medicine! But there’s one other strand in making sense of how Star Wars got everywhere… 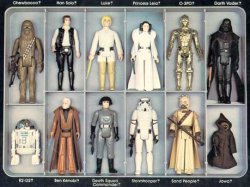 When Star Wars arrived, the conditions were right for a blockbuster. Special effects technology was getting more and more elaborate. Teenagers had more money in their wallets and kids had more say over the spending direction of parental dollars. Film studios were looking for bigger risks that would net higher rewards. Marketing had been Mad Men‘d into a sophisticated full-spectrum operation. Advances in global communications allowed films to become a truly worldwide phenomenon. Developments in off-shore plastics manufacturing allowed a whole new approach to film merchandise, particularly toys. The world was ready for a phenomenon.

But there was something else happening in the late 70s that didn’t even become visible for two decades: the childhoods of the first digital generation. All those kids who loved lightsabers growing up became the ones who created the online world and when they turned their minds to creative ends, Star Wars loomed large as inspiration. Mixing and remixing images, making special effects movies in their bedrooms, arguing furiously over the Phantom Menace – by the time the internet was mainstream, it was already full of Star Wars.

Throughout its history, material conditions have offered a series of new platforms for Star Wars to colonise, be played with and appropriated and, most importantly, shared by an ever-widening audience. This has allowed it to keep dominating and re-dominating new aspects of culture – if you also account for one other factor.

That other factor is, oddly enough, creative freedom. Despite being the most visible property connected the notoriously litigious Hollywood production system, Star Wars has found a way to encourage an incredible amount of freedom in how its iconography is explored and used. The commercial IP has always been tightly guarded, and commercial exploitation of Star Wars has been ruthlessly managed and protected. And yet Lucas himself has always been impishly indulgent about non-commercial exploration of this same IP, most obviously and notably in his official support for fan-made films. This has had an interesting effect: Star Wars iconography has existed within an inner-ring of offical material, and a wide outer ring of fervent creative exploration, while forcibly limiting the oppressive middle ring of commercial identity. Whatever else you might say about Lucas, he deserves significant acclaim for his support of fan creativity – the whole creative industry has moved in that direction now and he deserves at least partial credit for that.

The Result
So combine those three strands – the right story and the right design at the right time – and you get… this:

Mashups with other properties:
Doctor Who meets Star Wars fan mashup clip
Star Wars and Withnail & I
Using Star Wars iconography to recreate posters for other films
Star Wars and winnie the Pooh

Applying real science:
the Endor holocaust
The economics of Death Star planet destruction
Science and the original trilogy
Analysis of blaster fire
There’s even a wikipedia article on science and Star Wars

Kid life:
A global movement for a little girl who was being bullied
Growing up Star Wars
Star Wars and learning the alphabet
Star Wars family life cartoons
Joking but also serious advice about how to present Star Wars to your kids
Girl hits Darth Vader in the head

And much, much more:
Star Wars and Parisian subway tickets
Star Wars Jesus on the cross dress-up
Vader’s no
Vader: yes Man
Political critique via Star Wars satire
Star Wars corsetry
Jar Jar in carbonite and George Lucas in carbonite
Whatever the hell this is

The Balance of the Force

So… what to make of this?

Star Wars has become a modern mythocultural iconography. It is truly global, crossing lines of faith and culture. It provides a numinous, heroic frame that can be applied to everything quotidian, either for dramatic or ironic effect. When children wave a toy lightsaber, they touch a romantic, untainted path. When Darth Vader struggles with insurance forms, we laugh as we recognise that no path can remain untainted. Messy compromise and competing truths are unavoidable; the challenge is to retain a hold, however lightly, on the promise of romance.

Like other mythic iconography, then, Star Wars gives us a way to think about the balance between the mundane and the mystic. It is a set of symbols that we can use to work a little magic in our lives. Yes, they are shallow symbols when compared to the parables of Jesus or the Kabbalah Tree of Life or the Agrippa Pentagram; but while this limits the work they can do for us, it also frees them to be used by everybody. Star Wars is a handy, fun toolkit we can use to step lightly into another frame of reference; to illuminate this world now and here by playful invocation of another world, one from a long time ago, in a galaxy far, far away.

morgue (Morgan Davie) can be found on twitter @mr_orgue. He is not a Jedi. Still, he sorta feels he has to lay down his own Star Wars credentials here, so: He was born the year before Star Wars appeared. He saw it on the big screen some years later, in revival at the Naenae picture house, back when Naenae had a picture house. He bought Splinter of the Mind’s Eye at a second-hand bookshop, cut the Star Wars comic page out of the NZ Woman’s Weekly, traded Return of the Jedi cards under the table at school, and saved money to buy a Speeder Bike. He bought the Timothy Zahn books, but then made the mistake of buying the Kevin J Anderson books. He kinda enjoyed the Phantom Menace and Attack of the Clones, but he hated Revenge of the Sith. He hasn’t watched the original trilogy in well over a decade and feels no rush to remedy that.

If you’ve read all the way down here you might be the kind of person who’d be interested in reading his 2010 inauguration of the Pantheon of Plastic, the first people ever to have action figures made of two separate characters; or his 2007 list of the top 10 casting choices in science fiction and fantasy. No prizes guessing which Star Wars actor features in both lists.