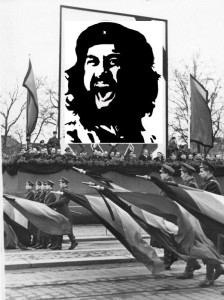 Here’s my own cult of personality (none of this is real):

Good afternoon, I’m here to announce the formation of the Ruminator political party. I am Lord Sutch, I am the leader of the party and I’ve gathered you all today to explain our ideas.

New Zealand is a great and proud country and rightly so. We have a record of being the first, the best and ahead of the curve. And we need to reignite that so we continue to lead.

We have a Government who has steered us through turbulent waters well. When the economy was looking dire Bill English managed to keep us afloat. However his time has passed, as we look to a future of growth, of improvement, of wealth.

National’s track record of overall stewardship is good, but their record of looking after their mates is even better.

Rio Tinto got mates rates when the Government just gifted them $30 million of your money. And then Rio Tinto announced a profit of $3.7 billion, New Zealand didn’t see too much of that.

Sky City got great mates rates when they were given an even bigger printer to print money with in exchange for a convention centre that the government’s own economic advisors said won’t be worth it.

We believe in a New Zealand where the state does not care what goes on behind your bedroom door, we do not care what goes on in your own home. It is our job to provide the people of New Zealand with a safe prosperous country where they can live their lives free of unnecessary restraint. Free from the fear of undue surveillance. Our bottom line in any coalition would be for the GCSB and TICS Bills to be repealed and a full review conducted of our surveillance state. We are not a party that cares what you do if you are not harming anyone.

We would also look at new and creative ways to stimulate the economy. Austerity measures throughout Europe have shown this is not a path we should be going down. While the Global Financial Crisis has hit the less wealthy the hardest, the recovery continues to benefit those at the other end. While the rich get richer, the poor are getting hungrier. We want a New Zealand that is fair and equal. We want a New Zealand where aiming to move up is not only not frowned upon, but is also an achievable goal.

We don’t want a New Zealand where those at the top get a bigger helping hand than those who need it.

Last weekend it was International Women’s Day. New Zealand is going backwards in the way in which it treats women. That’s a disgrace. We would reconvene the committee looking into equitable pay among sexes. We would aim to remove all boundaries between our society and a society where gender, sexuality and race play no part in your chance for  success.

Marriage equality was a wonderful thing and those who supported it are to be commended, but New Zealand is not an equal society and we want to make it so.

We are working on developing policies that will create a better New Zealand, a safer New Zealand and a more prosperous one. It’s time we had a government that worked for its people. Not one that forces its people to work for them.

Confidence: An ode to Bryce Edwards