A Time for (less) change 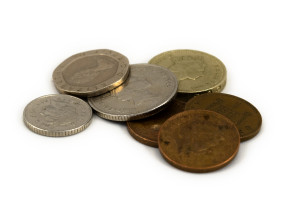 After all the sullen news of the last fortnight I wanted to write a nice, positive piece this week. I was going to say something about the joys of public transport in London. Monday morning found me on top of a double-decker (which had arrived on time like it always does I might add), and was enjoying yet another scenic ride through central London. I pulled out my notepad and reached into the front pocket of my bag for a pen to jot down a few pieces of pith. First I had to reach past a couple of pennies, some more pennies, a few 2p coins, a few 5s, a fistful of receipts I hadn’t had chance to throw away, some more 2s, my keys, three 20p pieces and a pound, and there it was…another penny.

Next to that was my pen. By that stage I’d forgotten what the nice idea was.

This week’s (admittedly petty) point is that it’s high time the UK did away with 1 & 2p pieces. I know it’ll be tough; nobody likes change (sorry, couldn’t resist) but you can do it. I’m not suggesting Britain starts using the Euro or absorb any other tediously sensible Eurotrash ideas like the metric system; I’ve been measuring my height in stone the last two years and I’ve grown rather fond of it. No, just stop me having to lug round these cumbersome, heavy pieces of almost worthless currency.

You can’t buy anything with a penny now anyway; even 2p will barely get you a cottage in Norfolk. Just take them out of circulation and be done with it. If anyone’s worried about how such a system would work, just look up ‘Swedish rounding’. Among others New Zealand, Australia and Sweden of all places have adopted Swedish rounding and they’re all the better for it. If the total price of the purchase ends in 1,2,6 or 7 the number is rounded down. If it ends in 3,4,8 or 9 it’s rounded up. If that confuses anyone, retailers can just make sure prices end in a multiple of 5. Overall it probably evens out, but if over the course of a lifetime you’re 10p out, I would suggest it was probably worth it not to carry around a nautical mile’s worth of copper in your pockets.

By the way, if you’re thinking copper is useful for giving to homeless people or putting in tip jars, it’s not. Tipping someone a penny or even a handful of pennies is just insulting and they won’t like you for it. If you can’t tip in multiples of at least 5p it’s probably a sign you don’t want to tip at all. One exception: all those jars with the ubiquitous ‘Tippers make better lovers’ sign on them: they can have the copper…and a note saying ‘here’s a tip, hurry up and think of an original sign’.