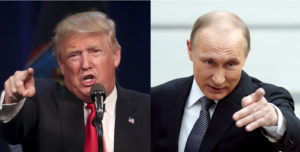 I saw an article yesterday that came from early December about the current intelligence community and its panic over Donald Trump. The article, from Reuters, says that Canada is concerned about Trump’s comments around using torture and other ethical atrocities as well as his ties to Russia and they’re worried about whether they should be sharing intelligence information with the incoming administration because of these.

Already Israel has said a very similar thing – Russia isn’t known to be a big ally of Israel, and so if Israel is sharing intelligence with the US and that info is getting back to Russia then this puts Israel in a very precarious position (I’m not going to get into the goods and evils of Israel in this post).

NZ should he asking the same question.

And he’s dead right. Canada is part of the Five Eyes network, as are we, the US, the United Kingdom and Australia. So we have an intelligence sharing operation with the United States too. And thanks to Snowden’s whistleblowing we know that we’re part of the X-Keyscore programme. So we have a vested interest in knowing what the hell is going on with Trump and Russia (I’m not going to go into whether we should be part of an international spying ring in this post, that’s not my point).

Of course the difficulty here is that the United States is our third largest trading partner with a not-insignificant $8 billion worth of trade in the last financial year, and Trump seems to be a guy lacking in impulse control. If we start asking hard questions he’s likely to slap higher tariffs on our imports than already exists.

So what do you do? I guess this is real-politik in its purest. My own take is that Russia is definitely one of the bad-guys. Putin seems to have no problem with invading other countries, mass-bombing of civilian areas, suppressing rights of minorities, suppressing freedom of press – not qualities I’d look for in my handlers-of-assets-who-become-President. So we need to be involved in finding out whether our contribution to the five-eyes is also contributing to Russia.

A lot of the evidence for Trump being a puppet of Russia is circumstantial (phone-calls from intelligence advisors to Russian ambassadors, international trips by Trump advisors etc) but goodness me there is a lot of it. So yeah, Chris Finlayson, Bill English, I think you should be talking to some of our other partners and finding out what they know. Because this is a risk of global proportions. Do we want to help Russia with what could be some crazy expansionist plans?