Blog wars: or how I learned to stop worrying and start being an Emerald Stormtrooper 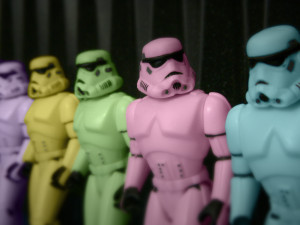 Storm troopers from across the political divide!

The best answer I’ve heard is that it’s a Green activist. So a Green party person then. That’s cool, it’s a funky name and conjures up cool images and I’m ok with people from the Greens visiting this site. But the author of the neologism (as far as I can tell) is everyone’s favourite leftie, Martyn Bradbury, or “Bomber” to some.

In the last week Martyn has made the following comments about us:

Why the bloody hell would a politician go on Ruminator blog? It’s a lowly read belt way blog that adds nothing and only offers getting tripped up and ripped to pieces by the mainstream media. Cunliffe’s Trout comment proved that. Whyte has months to make an impact, why is he wasting precious time on a blog that provides only risk? This is poor political management. It’s not like ACT don’t have a friendly and compliant mainstream media who are more than happy to give him as much time on air as he fancies. Yet what is he doing? Being interviewed by a blog no one reads unless you fuck up.

Why, why, why would any Politician agree to appear on Ruminator? A belt way site frequented by the Wellington Emerald Stormtroopers with no wider value other than to get tripped up and ripped to pieces by the mainstream media. Did Whyte learn nothing from Cunliffe’s appearance on Ruminator?

And that’s cool. He’s entitled to his weird ass opinions. But what I cannot stand, what really pisses me off is a hyprocrite. And you Martyn are a hypocrite of the highest order.

Also your font is ugly.

1. Right back at the beginning you had a crack at me for having a guest post from Judith Collins. You said that if you wanted to read right wing trash, you’d go to the Herald. Cool. I get that. You’re hilariously calling the Herald right wing trash because you’re so trendy and liberal and you’re also having a crack at the blog AND at Judith Collins. Well played Marty. Can I call you Marty? We’re pals. I’ll call you Marty.

You then hosted your little web TV show. I forget its name. You know the one. And you had on it guests. You had Colin Craig and Matthew Hooton. They’re pretty right wing aye? What’s the Herald going to do for an audience when all of its right wing fans come over to see you? You tried to defend it that you receive money for this show, so you’re beholden to certain obligations. That’s fine.

But how do you know that I’m not in the same boat?

But that’s beside the point.

2. I’m not going to belabour this point because I don’t know all the details of it, but you did promise a bunch of your writers that you’d pay them for their work. And you didn’t. And then you were a dick about it when they kicked up a fuss.

3. Oh the blogosphere is all turning on itself! Can’t we lefties get along! Wah wah wah let’s stop being mean to each other! Do you know who that was? That’s you. That’s you being sanctimonious and completely lacking in self awareness. For the most part, the left gets on with each other. There are disagreements, just like there are disagreements between David Farrar and Cameron Slater on the right. You, however, seem to be the common denominator in anything that gets sour. And then you block that person (you’ve blocked me on Twitter for months).

4. See those posts above, where you take pot shots at the Ruminator? That’s you, turning on another blog. Like you say we shouldn’t.

5. You said that no-one but Emerald Stormtroopers frequents this site. THEN THE NEXT FUCKING DAY YOU HOST A BLOG FROM A GREEN MP? DO YOU NOT HAVE ANY FUCKING IDEA HOW RIDICULOUS YOU LOOK?

Anyway, the point of all this is let’s stop the fussin’ and the feudin’. I enjoy a little bit of antagonism, but this is sillllllllly. Let’s be pals and hug it out aye?

I’m game if you are.

A question for our readers

“Well played Marty. Can I call you Marty?”

Bomber lost all credibility for about a decade back when he was doing talkback for a certain much missed radio station. He would sound off on all kinds of stuff he demonstrably had no actual knowledge of, but his sycophantic audience knew nothing about either, so assumed he did know what he was talking about. Thus a following is built.

Speaking of emerald things, Bomber sure does sound like he has a case of the green eyed monster in those little rants of his. Maybe Judith will chat with him if he asks super nicely.

Other things that are green: Sour grapes. Maybe Marty doesn’t like the thought that people are reading blogs other than his?