Comedy Fest Review: Arj Barker in Get in my head 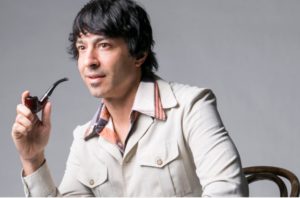 I saw Arj Barker for the one and only time in a gala show a few years ago. I wasn’t that impressed with his ‘surf rock’ comedy then, but the thing with gala shows is that you get a 5 minute slice of a comedian’s repetoire. And for some comics that’s plenty. While for others they need a longer amount of time to build up the narrative, the themes, the beats etc to be great comics. Arj definitely falls into the latter. His show “Get in my head” is a brilliant piece of carefully structured comedy that flies in the face of a lot of comedy conventions when it comes to putting on shows in New Zealand.

By that I mean that in New Zealand we like our comedians to be more self-deprecating. We like jokes about them. We don’t want to hear them being mean about us. And yet Arj manages to do the latter by pretending to do the former. All throughout his show are little pieces, throwaway lines that are designed to make him sound like an asshole, and the audience loved him for it.

The show is complicated. It doesn’t start that way, he comes out on stage in his usual chilled out style and his patter is standard opening fare for a comedy show. But from there he starts into some longer-form joke telling which have large parts without laughter but the pay-off is nearly always worth it.

He also likes to deconstruct his gags for the audience. Which adds another layer of humour, it’s a brilliant tool to milk a second laugh from one idea – if done well. It seems to be the trend at the moment to deconstruct comedy by comics on stage but not all have the deft touch to manage it. Arj does, in spades.

Some of the gags are dumb wordplay. But they’re only dumb in the way they look so effortless, in actual fact they are exceedingly cleverly put together.

There were parts that seemed to be satirising the false profundity that you often see in earnest comedy shows that try to articulate a point and he skewers them as wonderfully as he skewers our mundane lives.

The only criticism I could make is that he perhaps doesn’t completely win the trust of the audience for the whole hour. The third quarter of the show does hit a bit of a lull but he brings it back for a great ending.

It’s a shame he only did one night in Wellington but I’m sure he’ll be back.