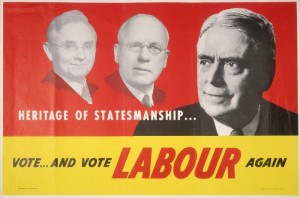 I was there on July 7, 1916 when the Labour Party was officially formed.

I was there when senior members of the Labour party were jailed for opposing conscription in World War I.

I was there in December 1935 when Labour was first elected to Government. I helped put together the state housing scheme and I helped set in stone the welfare state.

I was there when Labour Leader Peter Fraser was instrumental in helping form the United Nations.

I was there when Nordmeyer delivered his “black budget” and increased taxes.

I was there when Big Norm opposed apartheid with a strong voice and when the first anti-nuclear noises were heard.

I was even there when the Labour party was the most right-wing Government we’ve had and they deregulated everything in sight in the 1980s.

I was there when David Lange decided on a whim that New Zealand would be Nuclear Free.

I was there when Labour gave the Waitangi Tribunal more teeth to answer old claims.

I was there when Labour passed the Homosexual Law Reform bill making the love between two people who happen to be of the same sex no longer a crime.

I was there in 1987 when Te Reo became an official language of New Zealand.

I was there when prostitution and civil unions became legal.

I was there when student loans were declared interest free.

But now I am not there.

Because when the MPs who represent the party of the working people decide that they want to enshrine a perk that no-one else in the country gets, one that enables them to have twice the free international air travel they were already fucking entitled to, then that party has lost its fucking way. And that party has lost me.

[…] my denunciation of the Labour Party yesterday due to the travel perks issue, I just wanted to run through the bullshit that this National […]