John Key: I don’t even know what the GCSB is

By New New Zealand News correspondent Charles Harrison
In a belligerent press conference, John Key has admitted he isn’t sure what the GCSB does. 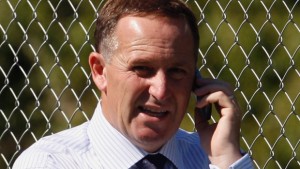 Key started by explaining that “most New Zealanders know that in my role as an average New Zealander I really have no control over our spy agency.”

“I think the average New Zealander isn’t really concerned that we’re spying on our neighbours in the Pacific. But what is important to remember is that I, John Key, at the end of the day, haven’t got a clue what they do. You hardly expect mum and dad New Zealanders to have oversight of our spy agency – I don’t see why you’d expect New Zealander John Key to do so.”

“We’ve all seen movies like James Bond or Johnny English – I assume the GCSB is much like that, but maybe with a Toyota Corolla instead of an Aston Martin.

“I think what the average Kiwi is concerned about is the flag under which these massive invasions of privacy are conducted. I know that is my key concern.” The Prime Minister added.  “We need to get that issue sorted quickly. If not our soldiers may not know which flag will be draped over their coffins when they return from Iraq.”

When asked if he believed that the GCSB had conducted mass surveillance of allies, Key said “Yeah,  I mean, probably.”

This afternoon Nicky Hager told The Ruminator that he is ‘unsurprised’ at the Prime Minister’s response.

“It’s very clear that John Key in the role of Prime Minister has no clue what his spy agency is up too- to hide behind the notion that he only doesn’t know in his role of a private citizen is just politics. Dirty, dirty, dirty politics.”

A spokesperson for the GCSB confirmed the alleged spying this afternoon saying “If spying is the worst we’re being accused of, then yeah, sure we did that.

TV3: Seemingly prepared to help the Nats with a dirty deal

NZ’s civil system is based an fraud, nthoing good ever came from it and nthoing good ever will.The fraud involves lying about the nature of law and the legal status of people.The remedy is to revert to the law of the land which is the true common law, and to reject the hollow tradition of parliament.