Some people are just good people. They do their part to make the world a better part and help ease suffering. Morgue Davie has found just such a soul: Karen from makeadifference.org.nz. Her organisation sews clothes for children in need. Which is an incredible endeavour. If you want to help out please contact info@makeadifference.org.nz.

When did Make a Difference begin? Where did the idea come from?

I came up with the idea literally on a sleepless Christmas Eve in 2011. I’m one of those painful people who flicks on the bed-side light in the wee small hours of the morning to scribble notes and lists while my brain is whirring on overdrive, much to the total frustration of my partner and cats. I wanted to think of something the average person could do to help people without it involving donating money. I wanted something small that makes a difference. I had finished reading a great book “Little Princes: One Man’s Promise to Bring Home the Lost Children of Nepal” by Connon Grennan which I remembered mentioned that orphanages often struggled supplying clothes for their children. Ahaaaa! And thus my idea was born. 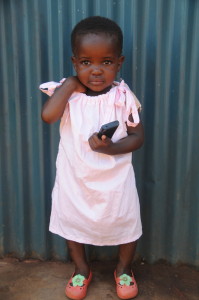 How did you hit upon sewing clothing for kids?

I am a VERY basic sewer but I enjoy making/crafting things like so many others but I don’t often have the purpose/reason to do so. I figured there would be lots of people like me who enjoy sewing but don’t use this skill much and making children’s clothes is fairly quick, easy and they look so cute! If I could come up with something simple that even I could sew, then I’d be onto something. I then researched, tweaked and roped friend’s kids into modelling various designs and thus the basic pillow case dress and a pair of shorts was chosen!

Is it the first thing like this you’ve been involved in?

Yes this is the first thing like this I’ve been involved in. I am on the Orphans of Nepal Trust which helps support the running costs of two orphanages in Nepal – which was probably why I read the first book. I also volunteer and foster for the SPCA and find it’s the little things behind the scenes that gives you a rewarding connection.

I have been long-time friends with an AMAZING man called Colin Salisbury who founded and runs GVN which is Global Volunteer Network. He deserves a knighthood for his ideas! He is a truly inspirational, incredible guy! A conversation about what he does makes my brain burst! His organisation places volunteers around the world in various countries helping out with either educational, animal, building or environmental work for charities and not-for-profit organisations. He also set up the GVN Foundation along with one or two others that raises money and supports various organisations (including the two orphanages in Nepal that I’m associated with). They do an “Eat So They Can” worldwide fundraiser where you get people to attend a food function in October each year, such as breakfasts, lunches or dinners either at restaurants or in your own home and donate a price for the meal that goes towards this fundraiser. He has worked with United Nations also has been endorsed by Bill Gates. He has amazing big picture ideas that fascinate me and he’s a super lovely guy.

I mentioned my idea to his wife who is also my friend and she said to talk to him about it. He said he could provide the orphanages or communities that would benefit from the clothing and hand deliver the items through the use of volunteers or staff. This is perfect as postage can go missing or the recipients of the parcels often have to pay tax to collect the items which is money they don’t have. I have since worked with Eliza Raymond who is Executive Director for GVN Foundation to co-ordinate where and when staff and volunteers are travelling to places that will benefit from a project and we discuss what would be appropriate. From there I plan out approximately four projects a year.

You’ve completed two successful deliveries so far – what were the outcomes there? What information do you get about what’s happened to the clothing? 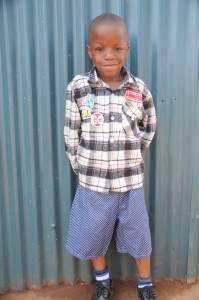 The first delivery was completed just recently where Colin and a few employees hand delivered the items to a community and children’s home in Uganda while they were visiting for an annual distribution trip. I think this is when they touch base with their on-the-ground agencies about what’s been happening and what is needed. Initially Colin went earlier in 2012 to the village and took samples of the clothes so the community could give me feedback on sizes needed and suitability. They suggested tops to go with the shorts for the boys. I went back to the drawing board and came up with a relatively simple top design and was able to include tops in the final package they received. The children and their families were so appreciative of the clothes and incredibly proud to have their children dressed so smartly in new clothes which are a luxury. Colin handed the clothes over staff that work on the ground to best work out how to distribute them but he took lots of photos for me when they received them.

The second delivery for Peru has three projects. One has been sleep sacks and merino hats for newborns for a maternity hospital. The next has been merino trousers and hats for a poor community. At a community tombola each child is given a numbered ticket. They receive an item of clothing for their ticket. This is a fun event that the volunteers run. The third project is merino dresses for a girl’s orphanage. These items leave at the end of this month with an employee from GVN who will hand deliver the items and she’s promised to send me back some photos.

Who can get involved? Do you need to be an expert crafty person from NZ?

Anyone can get involved here or overseas (as long as they don’t mind the international return postage fees). I try to keep the designs fairly simple and I provide the volunteers with a kit including pre-cut fabric, overlocked with simple instructions. I either post the kits or leave them in people’s letterboxes if they are in Wellington. I have had some fantastic students join from Chilton St James School and Queen Margaret’s School with the help of some wonderful teachers. I’ve got a lovely mother and young daughter who have sewn together and lots of super volunteers from all around New Zealand. I even got a few from various places around America and a couple in Australia after a mention on a blog. I have some men who have given it a go and I’ve roped in a few of my friends and even one of their mothers! Some awesome volunteers are regulars that do bundles at a time and keep requesting more. It reminds me that there are so many really lovely people out there willing to help others with the generous gift of their valuable time.

As mentioned above, if you’re feeling motivated to help out, and you should, then please contact info@makeadifference.org.nz.

Hi 🙂 I saw my friend signed up to volunteer to sew things and I would like to help out too 🙂 she said you’re between projects atm, but feel free to add my name to whatever list you have going for the next one 🙂
Thanks!
-Beth Strom (Auckland)

Thanks so much! Can you email me your address and I will definitely send you an update once things are ready to go?