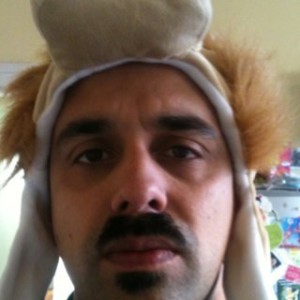 We’ve invited a group of well known New Zealanders to submit pieces about subjects that they aren’t well known for. This will be an irregular series so check back often. The first person to kick us off is journalist and well-known-wit Ali Ikram.

I live next to a cake shop.

A fact unremarkable in all regards save one.

Out my window every day can be seen each morning, people arriving for slice and muffins decked out head-to-foot in exercise wear.

None of these people are stupid.

There is no need for me to rush out in my pyjamas and remind them of the marathon required to burn off an Anzac biscuit or finger of lolly cake.

Instead, the root of the malady isn’t something that can be disabused by calm rational discussion.

The culprit is the most insidious word in the English language.

Should is a corrosive word that ruins lives in a quiet and almost unnoticeable way.

You want to eat cake. But you should go for a run.

You want to watch TV. But you should read a book.

You want to stay in New Zealand. But you should really see the world.

You want to have a career. But you should have kids soon.

You should have a family. But what will happen to your career.

The microscopic attention span is a modern plague and that it is endlessly divided in pursuit of untold causes is a curse.

Though before I go on I really should explain what brought all this on.

I was asked by this blog to write about a hobby I partake in.

But the idea of pure unadulterated leisure seems like a thing of the past.

Three things are to blame.

Firstly, work has taken on an importance it previously did not have. At fault is the question posed to kids “What are you going to be when you grow up?” The incessant hectoring has produced adults who think a job will give them a purpose or at the very least a sense of identity.

Secondly, leisure has become more work-like as a result. Employers urge us to buy into an overarching creed, vision and purpose for an organisation in excess of the hours we work. Revolutions in technology mean with one hand we clear emails, with the other we push a swing, robbing both acts of true intent.

The third perpetrator is the s-word mentioned previously.

What you are reading are not the words of a driven man. Anyone who knows me, knows a day at work can entail anything from interviewing a fascinating and engaging celebrity to cavorting with Playboy Bunnies. In fact, once I told a friend I was taking three weeks off over Christmas, she replied, “But what you do isn’t really work, is it?”

The answer to that is “yes” and “no”. The dilemma of striking on a job that is 80% pleasure is, it has the effect of making home feel like the place the real work happens.

Even if I did dig ditches or governed the Reserve Bank, it’s unlikely “breadwinner” status would confer the right to have pipe and slippers presented on arrival at the door and spouse/ children silenced at the waggle of a finger.

Instead, completing the circle on how we now consider work, being able to leave the house, wear a nice suit and converse with adults for 8+ hours is seen as a perfumed luxury compared to dealing to the wants and cares of three children.

But amidst all the suburban neuroses and first world problems I took up the closest thing to a hobby I can claim. Doing the one thing that marked our species out from the other primates who were happy to grovel around on all fours. I got out and walked.

If you walk regularly and with an open enough mind there is no secret of the universe which cannot be unpicked. I have never assumed the downward facing dog, the happy baby or the half frog. Yet I feel as though the beauty of what realisation yoga might offer dwells within me.

We should all spend less time watching Sky and more time watching the actual sky. If enough distance is covered, often enough, the rhythm tamps down the self. Passing dogs don’t care what school zone you live in. Cats, less so. To be doused with rain or bask in sun or muddle along in between?

On the path, if only for the briefest of moments we share a common fate.

What good words. I run – you know walking, but faster – which has the same effect.

Clever piece. Love the bit about the dogs and cats not caring about your school zone, it hits right at the heart of our communal suburban anxiety.