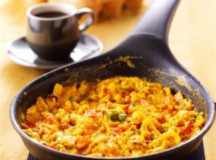 Sourcing ingredients: Easy – if you live near a supermarket, you are well covered
Total preparation and cooking time: 20 minutes
Serves: 2 (comfortably, enough to fill both me and Husband)
Difficulty: Easy

The Domestic Goddess’ version of Mexican Scrambled Eggs takes a little bit of prep, but once you get cooking you had better have everything else ready, because they’ll be done before you can say Para bailar La Bamba!*

One of the best things about making scrambled eggs, is how quick and easy it is. The Mexican version is no different… Well, it’s obviously a bit different, this one doesn’t use milk! 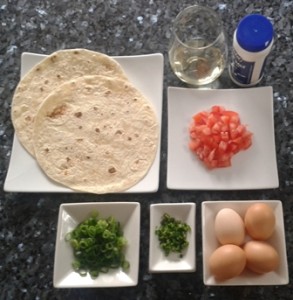 That’s not a glass of white wine, it’s vegetable oil

The first thing Nigella says to do is to heat your oil in a heavy based pan. I am fancy and have an induction stovetop, so I set the temperature to 7.5 (for your own, get the heat between medium and hot – too hot and the tortillas will burn, too cold and the oil will just soak into the tortillas instead of frying them – gross).

Preparing the tortillas is easy. I rolled them into a cylinder and snipped into strips straight into the hot oil. Ms L says to fry them for a few minutes, but I found it took closer to five. I kept them moving with a wooden spoon pretty much the whole time. 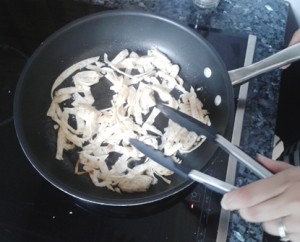 When I took them out, they looked like this: 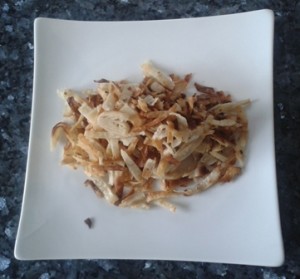 I would have been happy if this was the end result

Next I threw in the spring onion, tomato and green chilli. I found I had to add a tiny bit more oil to the pan, because those greedy tortillas had taken most of it. I should also mention here that while I love spice, my mouth doesn’t, so I was a bit apprehensive about adding an entire chilli into the mix. I didn’t have to worry though, the end result is not spicy at all. Not even a little bit. 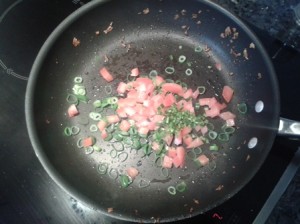 Next time I might even add TWO green chillis. What a rebel

I stirred these for about a minute until they started to brown just a little. I had to turn the temperature down so things didn’t start to burn. Then I returned the fried tortillas, mixed them through the vegetables and put in a pinch of salt (measured very carefully by Husband, who doesn’t like any more salt than is called for). 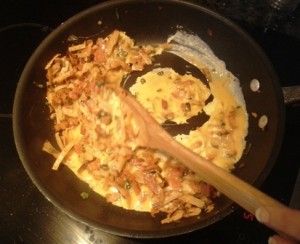 Faster than a speeding bullet!

After a very quick two minutes the eggs were cooked through and Mexican-scrambled-eggs a-la-Kim was finished and ready to eat. But not before I could show you how the finished product stacked up against Nigella’s, of course.

Ms L has brighter eggs, but she probably also has a studio. Well lah de dah.

I can see why Nigella says these are a good hangover cure. No burger required. They are tasty and rich, but possibly a little bland. Nigella suggests serving some refried beans alongside. I added both salt and pepper to the finished product, and Husband added jalapeno sauce. We also both added crumbled up crispy bacon, because bacon.

I suspect Nigella also has photoshop.

Did you use Free Range eggs? I bet Nigella has her own chickens … maybe you need some too?
Oh crap you have cats…

Kat, I’m pleased to say that as a good citizen, I did use free range eggs.

Husband and I wanted chickens once, but after we saw what friends had to do for theirs (hint – it involved warm water, an internal massage and a very uncomfortable chicken), we decided that we were more market egg buying people.