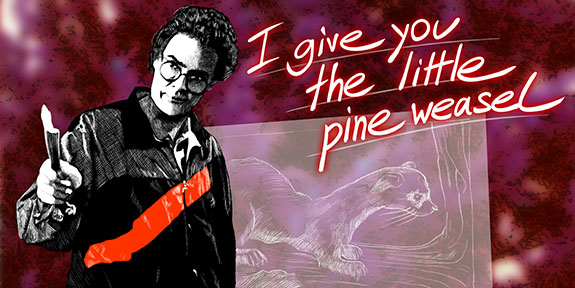 This week the #TwinPeaksRewatch is up to episodes 23 and 24. This week Emma Cameron offers a decidedly different perspective on the show, a valuable one I think, and certainly a funny and sharp one.

We are graced once again with the lovely illustrative work of Grant Buist (@fitz_bunny), check out his strip Jitterati. I’ve added below the main essay links to his tweet-by-tweet reactions to watching these episodes, which are just superb. I’ll shortly go back and add the same links to earlier posts, so don’t fail to check those out.

So I said I’d review a couple of episodes of Twin Peaks – with a twist. The twist is that I’ve never watched Twin Peaks before. I’m reviewing episodes 16 and 17 of season 2 cold. I’ve also never written a review of anything before. I imagine both of these facts will become glaringly obvious to any reader in due course, but I’m just getting it out there for the sake of honesty between us. Was it a silly idea? Maybe. I thought it’d be interesting and, perhaps, funny. I’ll get to how wrong I was a little later.

I am not unfamiliar with Twin Peaks. I was in year ten when the show first aired in New Zealand so I was probably pretty solidly in the target audience. That fact, however, held no sway with my parents, who didn’t permit all that much TV watching and certainly weren’t going to give the okay for watching this one.

At the time, I imagine that I felt like the only 14 year old in New Zealand that wasn’t watching it, but that was most likely not the case. My one solid Twin Peaks memory is from a school dance. One of the popular senior girls came to the dance dressed as Laura Palmer. Post-murder. Her skin was a grey-ish blue, her hair dank and damp, and her body almost entirely wrapped in plastic. It was lauded a triumph by fellow students (who either got the reference or pretended to) but I can’t recall how the teachers reacted. That’s it for my Twin Peaks experiences prior to this blog post. I don’t even recall seeing one of the controversial billboards.

Twin Peaks, the open credits inform me, is a town with a population of 51,201 (less Laura Palmer makes 51,200?). By the end of episode 16 I am seriously concerned that each of these 51 thousand-odd people will make an appearance in the show. So. Many. Characters. I have absolutely no idea what is going on. Frequently, and inconsiderately, characters refuse to refer to each other by name and I am forced to make up names for them. Threatening Phone Voice, Cyborg, Frosty Woman, Creepy Old Dude, Celery, Billlllleee Zane!, Crutches, Pirate lady, Fainter, Trucker Cap Guy, Bathrobe Man, Pearls, Log Lady, Military Man (later revealed to be Windom, Cooper, Catherine, Andrew, Ben Horne, John Wheeler, Hank, Nadine, Josie, Windom again, Leo, Donna, Log Lady and Major Briggs respectively).

Even once I begin to identify the characters, there are so many sub-plots and side-issues that my poor brain struggles to cope. My notes, scrawled while watching, say things like:

“Audrey receives anonymous mail. Contains a ripped piece of letter and instructions re: what to do ‘to save the one she loves’. I have never seen anyone less bothered by threatening communication”.

“Oh good lord. More new characters. There’s going to be a board meeting. Billy Zane is here. Also Bob, a short guy, and Audrey. I am struggling to take the (apparently) boss guy seriously while he is waving that piece of celery around.”

“Crutches is in jail. Norma goes to visit him. Crutches = Hank. Norma wants to divorce Hank. Hank attempts reform speech. No dice. Hank needs a favour – if he goes back to jail he’ll die. Give me an alibi for Leo’s shooting. Nope, says Norma. I’ll trade you alibi for divorce, offers Hank. Still nope. Good line: “I’d rather be his whore than your wife”. Burn. In a very Streetcar moment Hank calls after her, ‘Norma! Norrrrrrr-maaaaaa’!”

“Harry is drowning his sorrows in a bottle of Jack, which is turned towards the camera at an angle that best and most clearly shows the full label. Deputy brings him cooked breakfast. Harry assures Deputy that he and Cooper can handle it. ‘It’s a pretty simple town – used to be. I guess the world’s just caught up to us’. I call bullshit on your “pretty simple town” assessment Sheriff Harry.”

“Billy Zane is singing to Audrey. This is moving quickly. I wonder what the lead-in was. ‘Can I sing to you?’ ‘Um, ok?’ Billy is pretty smooth. Audrey confirms her eligibility. Asks for more cowboy tricks. Somehow the mountain of sexual tension is diffused – apparently by the sheer awkwardness of trying to feed another person a bite of a large apple”.

“Donna’s folks are home and she reports on her visitor, Dr Craig. No, says Dad, he’s dead. Donna is puzzled – ‘but he knew everything about me’. If ‘you are pretty, your name is Donna, and you have sisters’ is “everything” there is to know about you, you are a very dull character indeed. FFS – who lets in a stranger only on the strength of his knowing your Dad’s name and profession? Donna hands over the wee gift box. It’s going to be an eyeball or a finger, isn’t it? Oh, it’s a chess piece, with instructions for a move. Ohhhhh – Dr Craig was Trucker Cap guy in disguise. I knew those eyebrows were fake!”

I have so many questions. Who else has Windom killed that makes everyone so sure a lost chess piece will mean another murder? Who was the love of Cooper’s life, and what happened to her? Who shot Leo? Are Audrey, Shelly and Donna still at school? If yes, when do they attend? What on earth is the deal with Josie, Andrew and Eckhardt? How is it that Nadine loves Mike, and Ed loves Norma, but Nadine and Ed are married? And, while we’re on the subject, what happened to Nadine’s eye (and her mind)? Why does Windom have Leo, and why doesn’t Leo run away? What was the story with the ripped letter and the subsequent meeting with Audrey, Shelly and Donna – was I supposed to take something away from that? What is in the black box that Jones gave to Catherine from Eckhardt? Who is the guy visiting with Donna’s Mum? How does Cooper not notice Windom in his various disguises around town? What is The Book House? Is the pine weasel okay?

And, finally, who the hell killed Laura Palmer? You remember her, right? She’s briefly mentioned once, in two episodes. One character (Pearls/Donna) refers to a Laura – no last name given – and that’s it. Has the murder already been solved? Are we still here in Twin Peaks because Laura’s (albeit now solved) murder was the tip of a homicidal iceberg? Or is it is now a cold case, thrust to the back of law enforcement minds due to Josie’s more contemporary killing spree?

But the most confusing thing of all – the supernatural elements. Yeah, that’s right. It’s not a regular, albeit edgy and clever, mystery. There’s some weird, magical shit happening. Cooper has visions (a dwarf bouncing on the hotel bed?!), Log Lady talks to her log, mysterious markings appear on the bodies of various people, corpses are too light, bedside drawer handles distort with the writhing faces of the recently dead, lights are seen and owls are heard.

Is this the kind of show you can just ‘jump on in to’? No, no it is not. This is a watch-every-episode-and-take-notes kind of show. Have I put myself off watching Twin Peaks in its entirety and intended order with this silly experiment of mine? Yeah, I think I have. My overall impression is simply one of confusion. With so much of the show sailing clear over my head I started to notice little things – Harry’s over-acting, inconsistent use of soft-focus, and the clothes – oh, the glorious clothes. I had to google for explanations of the ending of Mulholland Drive and I can’t see things being much different with this show.

Emma Cameron lives in Wellington, New Zealand with her husband, two kids and one very dog-like cat. She dreams of being a full-time writer but does a bit too much dreaming and too little writing for that to become a reality any time soon. Her other passions are reading, wine, movies, travel and the purchasing of stationery for asthetic purposes only. This is Emma’s first ever blog post but she has had some limited success in other areas, having previously been short-listed for the Joy Cowley Award and the Chapter Short Story Contest.

Episode 23, aka Episode 2.16, aka 'The Condemned Woman' (not about the search for a suitable screen partner for Audrey) #TwinPeaksRewatch

Episode 24, aka Episode 2.17, aka 'Wounds and Scars' (quite an observant subtitle, that) #TwinPeaksRewatch

Episode 23: ‘The Condemned Woman’
NZ: 4 November 1991; Monday 11:05-12:05 (US: 16 February 1991)
Truman watches as Cooper pleads with Josie for the truth, Ben Horne has a change of heart about the future of Twin Peaks, and James Hurley and Donna Hayward say goodbye.
(Notes: feature article ‘The Cherry Pie Assignment’ by Steve Braunias, about the Autobiography of Dale Cooper book)

Episode 24: ‘Wounds and Scars’
NZ: 11 November 1991; Monday 11:05-12:05 (US: 28 March 1991)
Agent Cooper and the sheriff’s department investigate caves at midnight, Truman wakes up to the murderous embrace of a naked woman and Audrey Horne and Donna Hayward witness a strange meeting.
(Notes: wrong billing info used; it is actually for the following week’s episode)

Peak peak Rumination 13: And the hippie too