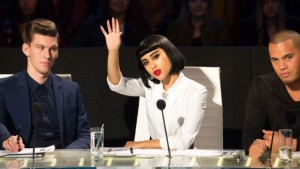 Yes, the girl who used to be somebody, you have a question?

I figured the Rumi needed some sort of trashy blog about this reality TV shitstorm to demonstrate site diversity. And while I may be a few days late (tardy editor means you’re a week late Nick – Ed), as long as the story is still in the top 10 on stuff.co.nz then it’s still relevant damnit!

As with most people, I had no idea what Natalia Kills and Willy Moon were prior to being elected as judges. So like any Xfactor nerd, before the show started I did some research and was utterly shocked to discover Natalia actually has somewhat of a music career prior to the show, good for you!

Willy Moon on the other hand had… one song… but that’s fine I guess? He met the minimum standard to be an Xfactor judge in New Zealand; as long as you took your first breath of air here and had tepid success in the last 10 years then welcome aboard soldier! We deem you worthy to judge us.

So fast forward to the action – one Sunday night. The night to end all nights. Or at least, the night to end one musician, and one Willy Moon. Years from now people will ask: “Where were you when that girl in black and that guy who looks like the alien on American Dad ruined their careers?” On the couch, I’ll say.

Let’s get one thing quite clear – they both fucked up, and the both went too far. I get it.

What followed was an international shitstorm – bigger even than the actual storm, Cyclone Pam. But we really do have to ask ourselves how much they deserve, or how much of this is just normal average people getting hard because (somewhat) successful people have taken a rather large tumble down to their level.

Damn successful people making us feel inadequate! We can’t you just be average like us!

The problem here is we have no idea what half the details are, yet we have slammed the hammer anyway. All we know is what was shown to us and the carefully worded statements from execs, who are probably equally as guilty. MediaWorks firing Willy and Natalia is like a chain smoker cutting out a tumour because they finally developed cancer.

It is highly probable that Natalia was told to be the “mean” one, encouraged to be harsh, and she just took it a bit far. It is also somewhat ironic that the same people who have condemned her for being “a mean nasty bitch” are the same people who are abusing her online with a torrent of vile hatred. This isn’t just the odd “Fuck you Natalia!” There is some real derogatory shit being spewed; things like “I HOPE YOU DIE YOU STUPID UGLY CUNT”.

Let’s be real here, while her comments were absolutely unnecessary, she was just attacking his clothes and haircut right? She didn’t attack his intelligence or his physical looks (or his singing for that matter). I feel like the massive international reaction is actually a bit patronising to Joe Irvine; as though the world needs to stick up for his suit and hair because he can’t do it himself. It seems his emotional instability has made the country feel like they need to step in as his de facto parent.

Perhaps emotionally unstable people who need an army millions to defend their haircut shouldn’t be on national TV?

I really don’t think this campaign of hatred is the best way to handle the situation. I move we all chill the fuck out. For her 60 second tirade – the internet collective has sentenced her to a doomed career and a life of shame. Past success notwithstanding.

But this does serve as a harsh lesson on how quickly the world can turn on you once the bandwagon gets moving. There is no courtroom online – you won’t get a chance to explain yourself. Once the masses get mobilised and the pitchforks get sharpened, you are entirely fucked.

Natalia Kills, despite her empowered exterior will almost certainly feel terrible right now. But success right! We made someone feel bad for making someone else feel bad! Yay…!!..?

Willy Moon however, will fade back into obscurity, he didn’t have a career to lose in the first place.

Regarding “call-out culture”: the uncontained fury of the imagined teenage Tumblr feminist