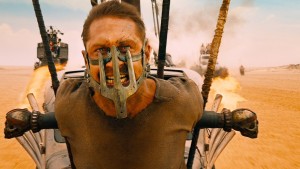 I didn’t even want to see Mad Max: Fury Road.  I don’t do action movies.  I’ve always thought they were mindless and stupid with thin narratives and sparse, (barely) functional dialogue.  And there’s the misogyny, of course.  It’s always felt like an action movie couldn’t be made without at least a fair dollop of casual sexism.  It wasn’t until the MRAs (Men’s Rights Activists) started banging on about this latest installment of the Mad Max franchise that my interest was piqued enough to go out of curiosity and because it pleased me that the mere act of me seeing a movie and enjoying it might really piss those bastards off.  Just to rub salt in the wound, I’ve been to see it twice now.

Mad Max: Fury Road is quite the Trojan horse.  It looks and acts like an action film but it is quietly subversive and it wields much power because of it.  Despite the controversy, it would be a mistake to label this a feminist film.  This is an action film with the same goal as all other action films: to entertain.  It is pure escapism.  Some have said that they just don’t know what all the fuss is about and they don’t understand the reaction from MRAs at all.  I know.  People can be very protective when they think something is ‘for them’.  This is a film for those who enjoy escapism but who don’t want to have to compromise ideals like equality and respect to get it.

Much has been said and written about the women in Mad Max: Fury Road, as though it is a revolutionary act to give women equal billing in an action film.  In a way I suppose it is, which is a reminder of just how far we have to go.  Imperator Furiosa, played brilliantly by Charlize Theron, lends surprising depth to the narrative without sentimentality – or much of a script to speak of.  Furiosa gives Max Rockatansky (Tom Hardy) a purpose beyond his primal instinct to survive at any cost and they both find a common goal in redemption.  Somehow Hardy showcases a character who is at once bereft of hope and a symbol of a better future, all the while seemingly barely able to articulate a coherent sentence, preferring instead to grunt his way along Fury Road.  In this thrill ride, actions really do speak louder than words.

People with disabilities are comparatively well represented here, too.  Immortan Joe’s right-hand man is his son who clearly has a disability, as does Immortan Joe.  Immortan Joe’s ‘armour’ disguises a vulnerability, much in the same way as Darth Vader’s imposingly black suit of armour does in Star Wars.  Both characters have respiratory issues that have them reliant on breathing apparatus.  Where in the past though, a disability of any kind may have been a signifier of evil and ‘the dark side’, in Mad Max: Fury Road, this is an unforgiving environment to say the least, and so disability appears commonplace.  As a result, there is a normalising effect where disability is not seen as different but as an integral part of the narrative, again quietly subverting expectations.

Imperator Furiosa has the most visible disability in Mad Max: Fury Road.  Her prosthetic arm is symbolic in a few different ways that might not seem immediately obvious.  First, her prosthetic is very definitely a mechanical arm.  The robotic age has come and gone and Furiosa’s arm is a potent symbol of a return to mechanisation.  This is a second, more primitive, mechanical age where alloys reign supreme once again.  Furiosa’s arm is symbolic of the vital relationship between humans and mechanisation that both empowers and also stifles the population.  Furiosa’s prosthetic arm is also a symbol of her own toughness, both on a physical and emotional level.  It is telling that at the only point in the narrative where she allows herself to express true emotion, she ditches the arm exposing her bare stump, symbolising her vulnerability in that moment.

Mad Max: Fury Road explores the effects of a critical scarcity of resources in a wrecked environment and the resultant dystopian power dynamics that can emerge in an already fragile society on the brink of collapse.  It also looks at the idea of freedom that many of us are privileged enough to take for granted and the dramatic compromises to personal freedom that some are prepared to make in return for security.  Hope, love, redemption, spirituality and the value of symbiotic relationships – with each other and with nature – are ideas that are there if you want to look beyond the carnage.  Above all, it is an exploration of the meaning of life in an environment that pushes its people to the limits of human existence as a result of their own self-interest.  Not bad for a film that is so loud, so fast and so visually spectacular.

The explosions are epic, the revs are booming, the yelling and screaming is guttural, the casualties are many.  It is just such a treat for the senses.  Oh, and that guitarist!  So. Much. Fun.  Thanks MRAs.  I never would have seen it without you.

What I love about the outrage from MRA’s about Fury Road was that if you look at the last two Mad Max films they both have important characters that are women and especially in Beyond Thunderdome Barter town is run by Auntie, Warrior Woman in Road Warrior. So their outrage was FUBAR.

Also as pointed out characters with disabilities all play key roles in the films. Master Blaster in Thunderdome, Lord Humungus in Road Warrior, the mecahic in Road Warrior.