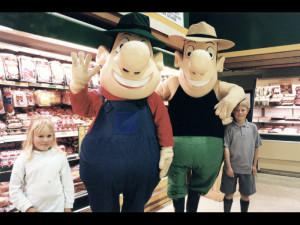 We fucking love National. And cheese.

There are a group of people, we are told, that focus groups suggest, will not vote National. They won’t vote National ever ever ever. They are the tribes of Labour and the Greens mainly.

One time, when I was working in a senior National Cabinet Minister’s office, I pleaded with him to do something more student friendly. He said “students don’t vote, and if they did they wouldn’t vote for us, so fuck ‘em”. It was half in jest.

Anyway, this group of people I refer to are the poor, the dispossessed, those at the mercy of our welfare system and ex-prisoners.

People who vote National tend to be, and I say tend here, because it’s not this simple, but they’re middle class+, farmers, property owners and fucking baby boomers (don’t show me evidence!).

Also, in 2008 when National was voted in to power in a huge swing away from Labour they ran on an anti-nanny state platform. That was basically it. We all remember lightbulbs and showers and being told how to live our lives and we were sick of it.

So this brings me to today’s rant and issue, and that’s National is engaging in its own form of social engineering, but it’s doing so in a much more clever, political and devious way. It’s only fucking around with those people mentioned above who are unlikely to vote for them.

We’re experimenting with private prisons. Both the remand prison in Auckland and the freshly opened Wiri prison are being run by Serco who is the biggest, evilest company you’ve never heard of. They also (helpfully) run the detention facilities in Australia, with that long record of positive treatment of illegal immigrants to support their case.

And now we’re being introduced to the idea of social bonds, where private suppliers bid to “purchase” the right to treat mental health patients, and if they hit targets XYZ then they get paid back more than what they paid for the right to treat them.

The major, major, MAJOR issue with these two points is that you are taking something that should always be the role of the state and handing it over to the private sector and making the health, wellbeing and rehabilitation of our most needy citizens a profit-making venture.

At its basest, there now exists incentives for prisons and for people to require mental health care. These are the reverse of what the ambitions of a Government should be (utopic though these ambitions may be).

On the flipside to this, there is no experimentation going on with climate change, there is no experimentation to try and find a way to reduce our emissions by introducing fairer trading for carbon, or working on ways to limit the emissions made by our agriculture industry and other high polluting industries, or protect our waterways from a frighteningly unregulated dairy industry. No no no, these are areas where National’s voter base is, so why would you risk fucking with them.

And there’s no experimentation with taxation so that white collar criminals and tax evaders are chased hard to recoup the millions, if not billions of dollars that should be going to the Government. Instead we’ll introduce weird new tests to ensure that our beneficiaries aren’t taking drugs, or that they’re sending their kids to school. Because the positively tens of thousands of dollars we might save doing this are far better than the millions mentioned above.

And we won’t close loopholes that make owning property the way to go in terms of investment, so that generations to come will not be able to afford home ownership. Because when you’re earning $1000 a day on your property, you’re a high value individual and that means you’re one of the privileged for whom this Government gives a damn.

Fuck this back scratching. I hope the nails are too sharp and they hit a mole or something, ripping it off.

Great Article! It is not surprising but alarming… Does such thing as an honest politician (once in power) still exist?

Can’t agree with your comments regarding the Prison privatisation.

I am very left in my thinking regarding corrections. Everyone deserves a 2nd chance, rehabilitation etc etc bla bla bla.

The Payment structure set up by corrections to pay Serco is all around successful rehabilitation. How much they get paid depends on whether the prisoner re-offends once they are released. To me this is a wonderful way of using money to incentivise the outcome we are after.

I would not support this if the Department of Corrections where doing a decent job on their own, but unfortunately they have a horrible record of rehabilitating prisoners. I feel it is worth trying the privatisation route to improve the situation.

On top of all of this NZ has got a nice clean and warm new prison at no cost to the tax payer. The prison replaces facilities built at the start of last century which were well below acceptable living conditions.

Surely this is a good thing for NZ prisoners???