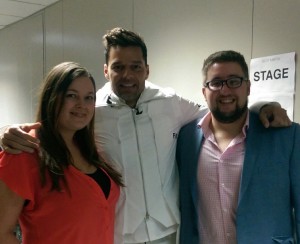 First off, full declaration, tickets were free and Sony also introduced Kim and me to Ricky. And can I say he is a beautiful man. And legitimately seemed nice. Like, actual nice. And my sister worked with him on a project recently and she also said he was very lovely.

However I wasn’t there to review whether or not Ricky was a nice man (he is), how was the concert?

It was fucking excellent.

It showed a number of things I didn’t expect from a Ricky Martin concert, there was the expected fun, dancing, partying, showmanship, Latin flair etc but there was also musical bravery. I’ve often wondered how artists can perform the same song over and over again for decades (Rolling Stones, how sick of your back catalogue are you?!). Well Ricky took this problem and just remixed his classics. So they were still there, but not in the form you might have been expecting. And this could have been jarring for people who went along to  hear She Bangs done the way they knew it, but I admired it. Because the version he played was still fun, it just had a sort of hard-rock dimension with  guitar solos and heavy drums.

I will be the first to admit that I’m not a *huge* Ricky Martin fan. I like(d) a lot of his songs because they were cool and fun when I was a teenager – Cup of Life, She Bangs, Livin’ La Vida Loca, Shake Your Bonbons and Maria – and Ricky dutifully played all these, but what impressed me were the songs that I didn’t know (still have no idea what they were called), they were fun. The man had the audience completely eating out of his palm.

He was soppy – “let’s all forget our issues for tonight” – he was fun, he partied, he danced, he worked the room like someone who legitimately loved what he was doing. Which was fun to see. The crowd was in raptures, dancing, flinging their arms up screaming, yelling. It was just a really really fun concert.

His voice is also excellent. He’s over 40 now, and I’ve seen a few acts who are getting on in age and as they approach the higher notes they suddenly drop an octave, but not Ricky, he belted them out with all the gusto that you expect.

Beyond Ricky, the show was a theatrical extravaganza. There were big screens, elaborate stage settings, a marvellous backing band and then the dancers.  The dancing was amazing, obviously sex sells and so there was a lot of sex on display; in fact my only complaint is that at times when Ricky was up a higher level singing and there were dancers gyrating on the main stage it felt a bit like I was at a strip club (I assume that’s what strip clubs feel like, cough). But this was a minor quibble to what was an evening that just filled the audience with excitement.

There was a guy in front of me, he’d have been in his fifties and he was up on his feet punching the air and dad-dancing for most of the night. His wife was less into it, but this guy gave zero fucks. And that’s probably how everyone felt. For one night the perceived naff-ness of Ricky Martin wasn’t a thing, we were there with the funnest host ever and he was leading us through a night of awesome.