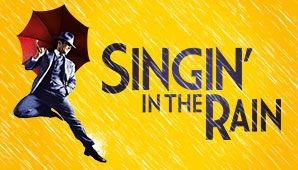 I was invited to review Singin’ in the Rain and despite my lack of musical theatre knowledge I thought it would be a good chance to get the reviewing muscles warmed up in advance of the Comedy Festival.

I know very little about musical theatre, even less about Singin’ in the Rain (just in case you’re wondering, my favourite musical by far is Jesus Christ: Superstar). I know the titular song, and I know Good Morning (only because it was used in a breakfast cereal ad some years back). I didn’t know the source material was brutally sexist.

But it is. And you can’t blame the current production for that, the whole premise of the story is kind of sexist. There would be no Bechdel test passed here.

I saw opening night and so I think a little bit of leeway should be given, however there were a few technical and performance things that I found sloppy. The character of Lina Lamont, the silent actress who was not made for talkies due to her inability to sing and horrifically grating voice, needed a better sound check, as the (necessary) high pitched whine of her voice caused a lot of her dialogue to be lost. Which I think was a shame as the actress playing her – Taryn-Lee Hudson was excellent. Also, in some scenes the lighting was eye-squintingly bright.

Also, the lead male seemed to be dancing to a slightly different metronome to everybody else, which my OCD was not ok with.

But when you put all of those things aside – and you can due to opening night syndrome – what was left was a fun, visually arresting, vibrant and well put-together show.

I was under the impression it was the West End cast and crew, so some of the above grated me more than it perhaps would have if I’d known it was the South African version (no disrespect intended to our South African friends, but if it’s Broadway or West End it kind of comes with a certain expectation).

Bethany Dickson , in her role as chief love interest Kathy Selden [edited from the other way round] was utterly superb. Every number she featured in she just drew your eye. Her presence on stage, combined with her voice and acting made her the stand-out for me. She was followed closely by Steven Van Wyk as Cosmo Brown – though he had the advantage of playing the comic relief character who usually is the popular one. That said, Steven had a great voice, an excellent sense of comic timing and seemed to be the best dancer on display. Well certainly the most flexible of the men anyway.

The songs may not be immediately recognisable outside of the main ones, and also maybe not as fun as other musicals, but the numbers are still certainly foot-tappy enough. And then there’s the rain.

A lot of the promotional material celebrates the 12,000 litres of water used in the production, and as Kim and I were sitting in the “splash zone” we were provided with water-proof ponchos to wear. And we needed them. It is something else to see a rain shower pour down inside a theatre. It was a hell of a lot of sprinklers and the celebrated scene is quite magnificent. We get an encore of sorts when the rain effect is used again for the big ensemble number at the end and it retained its magic (though the audience did squeal the first time it occurred).

I’m not sure I would wholly recommend this show to everyone, but certainly it triggered some nostalgia in others I spoke to – and that seemed to be the best target market. If you’re looking for a night on how it used to be – the good ol’ days, then Singin’ in the Rain is an excellent idea.

Singin’ in the Rain is on at the St James Theatre until April 26.

Why I don’t wear my wedding rings to job interviews

Heya, this is just a small typo, but the character name is Kathy Selden, not Bethany Dickson (you’ve got them switched.) Thanks for the review – I’m off to see it next weekend.

Well that’s embarrassing and amateur. Thank you for noticing it and correcting it so diplomatically!