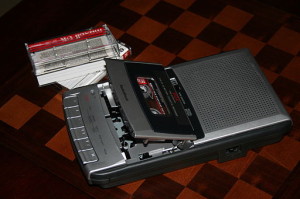 There are perfectly straightforward reasons why the sound of your recorded voice is quite different from what we think we sound like. It seems to me quite sensible to extend psychological effects like the uncanny valley to explain why it not only sounds different, but also creeps us the fuck out.

My theory is that it’s so close to what we sound like, that we reason it can only be us, but it also quite clearly is not us. It’s a doppelganger or us when we were under a spell. The first article I linked to suggests a slightly softer version of this idea, and in the same breath, covers that feeling we get when we see photos of ourselves and go on to reason that we aren’t photogenic, or that we’re ugly, or that cameras, cameraphones, instagram and indeed the entire institution of photography is a conspiracy designed to grind every last vestige of self-esteem from our souls.

I don’t buy the idea that it’s the mirroring that’s responsible for this disconnect between what we see, and what we expect to see. That might constitute part of the problem, but more likely there are other elements in play too: my reflection is always at eye level. I rarely stare at it while I’m deep in conversation, or listening to an animated discussion about a new film, or singing loudly and drunkenly along with a song at a party – my mouth is closed, my face is still. It doesn’t actually have anything to do with Heisenberg, but I don’t think it’s possible to be the observer and the observed. We’re always too close to the facts to make a really sound and precise observation about ourselves.

I made a fairly profound alteration to my personal style a few years ago – a step out of my plain-at-best boxy jeans into the skinny jeans my partner insisted I would look good in. I’d resisted because I was certain she was wrong, based on one pair I’d tried on once, and (probably) because it didn’t fit my mental picture of who I was and how I dressed. I gave another pair a go because the opportunity presented itself, and she was quite clearly right, and I currently dress maybe a million times better than I did five years ago.

It’s odd that I didn’t trust her enough to try a change in the first place. It’s especially odd that I didn’t give more credit to someone whose view I trusted enough to be in a romantic relationship with. One’s partner is not always right on these things, and goodness knows I’ve seen men and women dressed by their partners who look pretty silly, but trying something – listening to someone you value and trust – shouldn’t be so hard. It shouldn’t be hard at all, actually.

My perception of New Zealanders is that we tend to be humble to the point of excessive self-deprecation. It’s the subject of some recent advertisements from ASB. I know that many people down-play their skills and accomplishments, and I have begun to wonder whether and how this ties into our psychology. My understanding is that regular reinforcement of value messages does tend to sink in to the psychology of most people (and that it is a sign of mental illness when this doesn’t happen), so it’s worrying to a small degree that so many wise, clever, funny and beautiful people I know deny that about  themselves – but that’s not how I’d describe myself, either. I’d try to duck and avoid praise like that. But this is the sort of disconnect in judgement that unravels very quickly under close scrutiny. Unless you are the blind spot in your friends’ radar, the one shabby, dull, grumpy and unpleasant person that everyone’s perception fails on, you’re most likely just as fascinating and fun and valuable as they think the rest of their friends are. We’re capable of convincing ourselves of almost anything and yet convincing me that I have value is something I find very difficult indeed.

I think a lot of people make a distinction between who they are inside and who they are outside. Our value in the world is in the imprint we make on others. Doing good makes you good. Your actions are what everyone sees, so your justification only matters to you. Certainly whether or not you give a shit about other people’s judgements is up to you, but if your life is full of people you admire, isn’t their admiration valuable too? I suppose this is a very long-winded and over-complicated way of saying you should listen to your friends and the people you love, because it’s a lesson I took a very long time to learn.