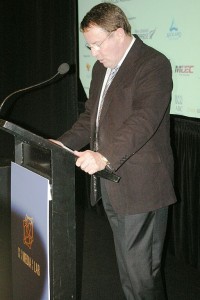 Radio New Zealand has a story online about John Banks being committed for trial on a charge of filing a false election return. At the time of writing, it included the following statement:

Banks may have to prove not ‘wilfully blind’ – lawyer

A specialist in electoral law says if John Banks faces trial for electoral fraud he may have to prove he was not “wilfully blind” about where his mayoral campaign donations came from.

Wellington lawyer Graeme Edgeler says courts have often ruled in the past that intentionally pretending not to know about something and setting oneself up so they can technically plead ignorance, can be enough for there to be a case to answer.

If this Graeme Edgeler fellow actually made these claims, then he has no idea what he is talking about. John Banks is entitled to the presumption of innocence, and is not required to prove anything. The onus of proof in respect of every element of the charge rests on the prosecution, and every bit of it has to be proven beyond reasonable doubt. There is a question about what “knowing that it is false” means: can it include situations where the person doesn’t know, but is wilfully blind as to the reality? Best guess is that it does, however none of this changes the onus of proof; it just raises a question about what exactly the prosecution needs to prove.