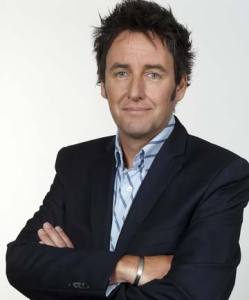 The following is an opinion piece, that opinion is mine.

I work in the mainstream media, or as some bloggers would have you believe; I work for the devil, determined to lead you down the path of whomever they don’t want you to vote for. My contract is signed in blood, not mine obviously, for organisations as evil as the MSM you have to use something far more innocent; a puppy, a new-born baby or the leader of whichever political party a blogger supports. Upon signing the contract we immediately begin our indoctrination.

We say good-bye to friends and loved ones who would contradict our newly acquired values, and embrace only those that will reinforce the gospel of our new evil deities. Of course, we never divulge this information or admit where our allegiances lie to anyone, where would the fun be in that? It’d be like throwing a surprise party and sending an invite to the guest of honour, then wondering why ‘the plan’ hadn’t worked.

Ahhh, ‘The Plan’ aka ‘The Agenda’, it’s often spoken about but never named for fear that if we name it, it will end up in leaked documents. We gather en masse in dark rooms with a single light source high above our heads, casting very unflattering shadows under TV reporter’s eyes, which always upsets them. It is in this setting that we figure out the best way to attack people’s favourite leftist/rightist/centrist/uppist/downist wing politician. We do this through the combination of voodoo, blood rituals and this one time a game of Pictionary decided it (it’s very difficult to draw ‘Te Ahi-kai-koura-a-Tama-ki-te-rangi’ in less than a minute, but to nobody’s surprise ‘impartiality’ was the word that the game was ultimately lost on).

There’s that word, ‘impartiality’, the catchcry of bloggers on the far ‘which ever direction’. ‘Bias’ generally follows shortly afterward, which is an attempt to undermine the higher cause, which is…ummmm… world domination or something, I don’t know, I zone out sometimes. Luckily there is always someone around who will write a blog, tweet or facebook post to tell us our motives, sometimes we get two people writing different blogs, tweets or facebook posts about the same thing telling us that we are undermining both of their polar opposite political choices (we call this the Paula Abdul, by ‘we’ I mean ‘I’).

But there the bloggers are; being a voice for the disillusioned. They are the ones that have seen through the carefully punned headlines, the catchy stings, and the beautifully composed shots, to see the ‘truth’ behind it. It’s a good thing too, because one can only be an evil entity if you a nemesis. People determined to bring down the destructive conspiracy and free the masses. All are welcome in the resistance, so long as people agree with their point of view.

It’s understandable why people follow these blogs. They say what some people are thinking, it validates their point of view, and if one blog doesn’t, there will be another that will. Emotive language is used; opinion and fact are interspersed with nary a distinguishable difference. But that’s ok, because the opinions are the same as those of the people who are reading it, so that pretty much makes the opinion a fact… because they read it somewhere.

While the blogger may lack the profile of the MSM, they also (for the most part) don’t have to worry about having accountability to pesky organisations like the BSA or the NZPC (That’s the New Zealand Press Council, not the New Zealand Prostitutes Collective (although with the revelations alleged in the Whaledump emails…)) They can move freely throughout the internet spreading their opinion-facts, gaining followers for their insurgency.

They might sit upon their mountain (computer) and wait for their flock to form, as they come from miles (figurative) around to hear the wise Zealot speak of the sinister and evil MSM. They speak eloquently of the misdeeds of the right/left and how the debauchedMSM are in bed with them (sometimes we just get so cold and lonely, it’s nice to be wanted, to be held). They tell their followers to not be swayed by the bias, to stay the course of the one true path, their path, Hallelujah and such.

But what of the media agnostics? Those that don’t subscribe to any particular brand of news source, how can they form an opinion? How can they have their opinion validated if they aren’t constantly checking the same sites? How can they know what to think if they haven’t subscribed to a particular denomination of information gathering? Who will tell them about the bias, the BIAS?

It would be ignorant to say that there is no bias in the MSM, the MSM is made up of people. People inherently have biases and prejudices. What I suggest is that often the ones screaming ‘BIAS!’ and ‘they weren’t IMPARTIAL!’ are generally the ones with the greatest bias of all (but if I’m saying they have the most bias, does that mean I have more bias than those with the most bias? Oh no I’ve fallen down the rabbit hole of self doubt. Good thing, as per the MSM handbook, I lay a ‘thread of lies’ so I can find my way back)

I think blogs are an amazing opportunity to give people a voice, the problem that I have with ‘alternative news’ blogs is they often perpetuate a more extreme point of view all under the guise of emotively worded ‘facts’. (The irony of me writing this post in a blog is not lost on me).

But this is the blessing and the curse of the internet; it gives everyone a voice; those that don’t have a voice but desperately need one and those that have one and possibly could use it with a little bit more care and restraint. I’m not suggesting censorship, and again I’m not saying that there aren’t problems with bias within MSM, what I’m saying is that there is a higher level of accountability within the MSM than any blog out.

Like most things on the internet and in life (apparently they are different), if you are concerned about bias, check for yourself, and then form your own opinion.

Also, if you disagree with an MSM outlet or it makes you angry that doesn’t necessarily mean that the journalist has done a bad job, it just might mean they have interpreted the information differently or you have read, watched, listened to their piece with a right/left bias affecting how you interpreted their words. This doesn’t mean you should abuse them, through social media or any other avenues.

If you don’t like mainstream coverage that’s fine, there are many different sources of news these days. But, don’t search out news sources because they fit your opinion or because you agree with them, because you won’t learn anything or be challenged, and you will become just as ignorant as the people you laugh at on the other side of whatever argument you are having.

I AM GOING TO WRITE AN ANGRY BLOG POST ABOUT THIS. HOW CAN A CHURNALIST BLOG? CHURNALISTS NEED TO BE PROVIDING SHEEPLE WITH INFORMATION. I NO LONGER TRUST THE RUMINATOR BLOG AS MY SOURCE OF NEWS FACTS AND WILL BE GOING TO MARTYN SLATER’S BLOG THE DAILY OIL.

So true
It is a little worrying that there has been a call of utu from some commentators, after the election ( when they win)
Hopefully if they do win they will realise pissing off the people who buy ink by the barrel is not a good idea but worth remembering when you vote

I think the point he misses is there doesn’t seem to be any decent journalism in the MSM. Its all lowest common denominator, Mikey Cyrus bullshit. Big business is not prepared to spend on journalists who need time, weeks, months to develop a story. Its all about output, filling pages and money! Which is why, I think, real journalism hasbbeen left to the likes of Metro! North and South etc.