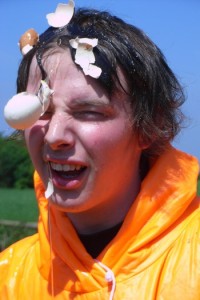 It’s 3am and my children are safe and asleep. There’s a phone in my bedroom, on my bedside table in fact. It’s charging, because smartphone batteries are shit.

Not only is my phone charging but now it’s ringing. At 3am. Who would call me at 3am? The number is “PRIVATE NUMBER”. Unlike most people, I’m actually more inclined to answer when it says PRIVATE NUMBER because I get excited and think it’s someone important.

“Hello” I say groggily. Trying not to wake Kim who’s sleeping next to me.

“CORMACK YA FUCKFACE” a voice rasps, “GET THE FUCK OUT OF BED, WE’RE GOING FOR A RIDE”.

“Jesus John, it’s 3am. What do you think you’re doing?”. I’m not in the mood for putting up with more of his shit. The last ride with Key nearly got me arrested and my septum was still recovering.

“Shut the fuck up pussy. Get out of bed and come upstairs, we’re going for a ride. I’ve been drinking scrumpies and now I’m looking for something to do.”

I shake my head and sigh. Kim stirs.

“It’s the Prime Minister again dear, he wants me to go out again.”

“Why does he keep bothering you Dave? You don’t even vote for him?”

Kim had a fair point. I was not a fan of the National Party, or the policies that Key had implemented. Why did he keep bothering me?

The phone lights up again.

“And Cormack, wear something nice this time. We’re not going to a fucking Dennys”.

I roll out from under the duvet and slide into my suit. I put on a white shirt and black dress shoes. I run a nasal rinse to clear out anything that might get in the way of the night’s activities. I’m ready to go out again. With Key.

I slowly make my way up the stairs to the roadside. Key’s sitting in a car, it’s a pretty flash car. Looks like an M6 Convertible, dark blue. Typical. Key is leaning out of the passenger side wearing that grin of his that could be sinister or innocent. I still couldn’t get a read on him.

“FUCKFACE!” He yells across the road. “It’s about time you got here! Let’s hit the road!” He raises his hands above his heads and howls to the moon like a poor impression of a werewolf. I notice the two bottles of Jack he’s got electric-taped to his hands.

“John, what’s that on your hands?”

“Now get the fuck in the car. We’re going to hang with the proles.”

I climbed in the back. John was in the front passenger seat and one of his hired goons was driving.

“I like this song” he tells me as though he was sharing a secret, while scarlet, not blue, blood dripped down his forehead.

Then he jacks the stereo all the way up, the M6 burns out and shoots up the road. House lights start turning on, dogs start barking, cats are meowing and John starts yahooing.

“SUCK IT FAGGOTS” he yells as the car screeches around another corner. He opens the glovebox, and takes out a whole lot of David Seymour brochures wrapped around eggs.

“Can you believe this guy?” He yells to no-one in particular. He leaps to his feet as we fly by suburban houses.

“WHO WANTS TO SEYMOUR EGGS?” He cackles.

With the hand free from Jack he launches the ACT-Eggs into the door of the the next house. It explodes into a mess of Seymour’s face and ACT coloured-yolk. Moments later the home-owner comes running out to see what the hell is going on but we’re already well into the distance. The home owner must’ve suspected it was Key. He was notorious in these parts for this sort of behaviour. Neighbourly had been lighting up on the discussion boards with suspicions, but no-one could prove anything.

“Where’d you get the Seymour brochures?” I asked.

“The clown printed thousands, but he didn’t need to. It’s not like we were actually trying. I mean Jesus; Goldsmith? He literally wrote the book on Banks and no-one likes banks. Paul was never a serious candidate.”

“Weren’t you worried when he released that ridiculous YouTube video?”

“Speaking of which. Let’s get Hi.”

John laughs at his own pun.

He launches another egg at a lonely old man who is going for a midnight stroll. The egg cracks him on the back of the head. The old man tumbles to the ground. And lies there. John grabs the shoulder of hired goon and gets him to stop the car. Key throws open the door of the car and runs to the man, now struggling to get himself up off the ground.

“Are you ok sir?” Key is all concern and compassion now. “My compatriot here was behaving like a terrible human being.”

I’m stumped. Key is just out and out lying to this old man.

The old man turns around and sees that it’s Key who is looking after him. He smiles weakly. “Hello Prime Minister, it’s so good of you to look after me, I’m just an old man. Thank you so much.”

The old man is standing now. A mess of egg yolk and David Seymour is running down his back. Key’s demeanour changes when the old man gets to his feet.

“VOTE KEY” he yells as he pushes another egg into the the old man’s face. He runs back to the car.

“GO GO GO” he yells. Pour Some Sugar on me is now playing.

We drive off as the old man waves happily at us. Just pleased to have met the PM.

When a compliment isn’t