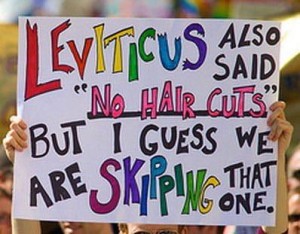 I hate to say it but I think the liberal protest movement could take some tips from the conservatives.  It takes a lot for me to say something like that, as a very liberal person. But I’ve stopped going to protests and demonstrations, even for issues that I feel very strongly about and that directly effect my life. This is why.

An argument is made stronger by a diverse group of people arguing it. However, recent protests I’ve seen have also taken the diversity of the people in attendance and turned that into a diversity of messages. Simplicity of message is where the conservatives really have it in the bag.

I’ll talk about the New Zealand marriage equality movement that will hopefully result in the passing of the Bill in the next 24 hours. I will start by saying that I am fully in agreement with the sentiment of the movement – which is to grant all people the opportunity to legally register their relationship as a marriage or a civil union if they so choose, regardless of gender. This is a simple issue of equal rights.

This is a deeply personal issue for me. As a person with an ‘equal gender opportunities’ policy when it comes to my relationships, it doesn’t make sense that I could get full legal recognition of my relationship if I was with a man, but not with my long-term girlfriend.  Despite the personal nature of the issue, I have only been to one marriage equality rally because I don’t think the movement has been well-organised, well-communicated or persuasive enough.

These aspects of a movement are vitally important because it’s not a foregone conclusion that the Bill will pass. MPs can change their votes. In fact, they’re likely to do that if enough of their constituents come to them with reservations. They’re also playing that ever-fluctuating game of politics. The country needs persuading right up until the moment the Bill passes. 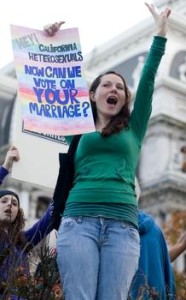 Persuasiveness comes with the simplicity of message that conservatives often get right. That simplicity is a product of organisation and clarity of communication – both within the movement and from the movement to the media.

‘Funny’ signs at demonstrations are not persuasive. They are eye-catching, certainly, and they do show up in media reports of protests and rallies. BUT there is only one message that needs to come out of the demonstrations in support of marriage equality – and that is the request to be granted equal rights. In fact, I don’t think there would be anything more persuasive than a diverse bunch of people all holding homemade signs reading ‘Equal rights’.

Until the argument is won and we have equal rights, we can’t diminish the seriousness of this situation by cracking jokes. We need to provoke conversation and curiosity in the general populace rather than exhibit multi-layered jokes that demonstrates how very smart we are. It doesn’t matter how smart or funny we are. We don’t have equal rights yet.

I am so grateful that there are people who protest the things I can’t bring myself to anymore. I am glad that there are people standing in opposition to the small-minded and their short-sighted conservative views. Writing this post has made me even more grateful for those people and fired up to protest than before, too. But first we have to acknowledge that the inclusive/fractured nature of liberal protest is not working as well as it could. We have to organise the messages – our strategies can differ but the core goal, the meaning of the movement, can and should be boiled down to a single persuasive point.

The sad, sorrowful tale of a London summer

Thinking: It should make you think

Who invites those bloody asset sales people? or do they invite themselves?

Part of the issue with the slogans being used is that the conservative’s arguments are far too easy to poke fun holes in. When they’re basing their opposition to same gender marriage on religious texts that have passages in them that border from the ridiculous to the down right frightening, humour can be a useful tool for highlighting the absurdity of the opposing view.

I won’t re-post my facebook comments but I will add:

Don’t preclude humour or creativity from protest or debate. I’m not saying that the oppression or struggle is a fair price to pay, but it is often through the struggle that the insight, the brilliance, and the genius emerges.

I can understand the frustration of having your message diluted by the whimsical (this is human rights dammit, serious business!), but I believe it really does add to the conversation.

Besides that, the opposing view may simply not believe in ‘Equal Rights’. Then the conversation ends, as obscene as that is. At least with a multi-layered attack, there is more than one way in.

This struggle will end, even if not soon enough. Human rights will no longer be stymied by legislation and hopefully social change will follow. History will see hate, lies, and wilful ignorance countered with intelligent rebuttal, humour, and satire.

I agree – to a point Igor, but I think you also end up diluting the message. It’s important to have very few messages when you’re trying to enact change, and they should be consistent and used repeatedly where possible. Humour is a great device for catching attention, but I’m not sure it works as well for enacting change.